Home Archives Profile Subscribe
Why Isn’t THAT in Your Museum, National Historic Park Service - Eisenhower’s Mom
Skirmish #299610 - Good Cop / Bad Cop - Was That in Your Book?

The Door Stop at the Eisenhower National Historical Site

Should you doubt that you are adjacent to the Gettysburg battlefield, all you need to is glance a couple hundred yards away at the observation tower built to survey where the troops once fought. Eisenhower’s secret service attachment had conniptions over that tower, and pressed Eisenhower to remove it. He refused. If it was for the public’s edification of important history, who was he to take it down? So they bought him a book on the subject of what assassins with high-powered rifles could do. ‘Take it down,’ he said. 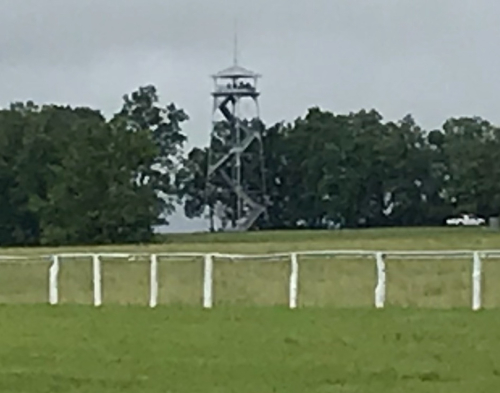 Of course, by the time you spot the tower, you will be in no doubt as to the Musuem’s proximity, because it is only by shuttle bus from the Museum that access to the Eisenhower ranch is gained. It is itself a National Historical Park Site.

On the grounds that came with the farmhouse, Ike used to putz around on a golf-cart type of vehicle. Dignitaries that he would invite away from the congestion of Washington would putz around with him, and Ike would show them the Angus cattle that he raised. Khrushchev was one who rode with him. If the Soviet leader was fond of railing about the materialism of the West, he would have been hard pressed to make his point here. The farmhouse has more rooms than is typical, but otherwise it is no different than any farmhouse of the era. The extra bedrooms are not large. Some of them are downright tiny. 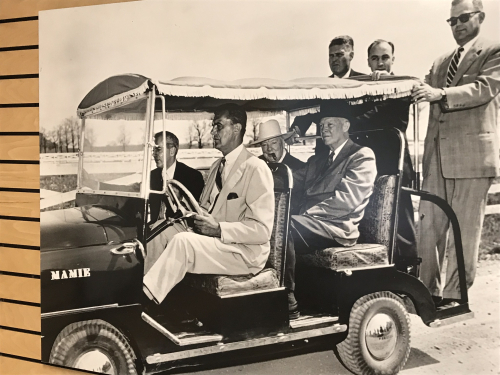 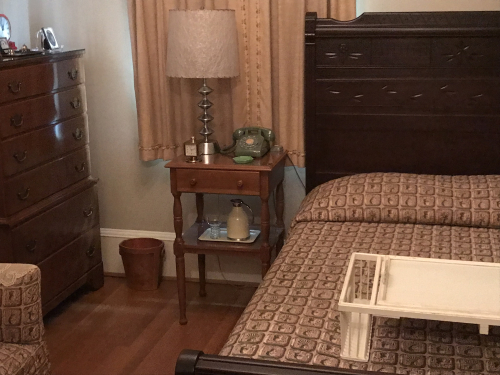 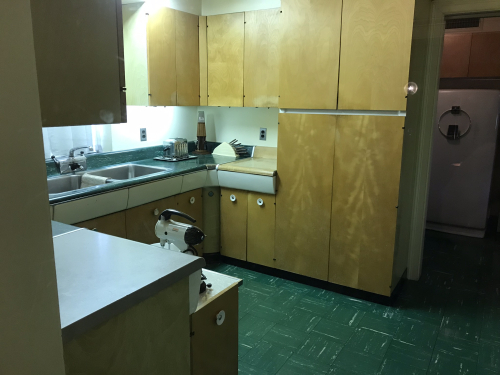 The farmhouse was not a budget-buster in itself, but the rehab work proved astronomical, the equivalent of two million dollars today. The brick facade proved to be just that—the covering on a log frame that was rotting away. He should have had an inspector look the place over for him before signing on the dotted line. After Ike was done, he bought a car (hard to photograph because it was in the closed-off garage) for his wife (he did not drive himself) and told her that they were now broke. It is about that time that he figured he had better begin writing his memoirs. 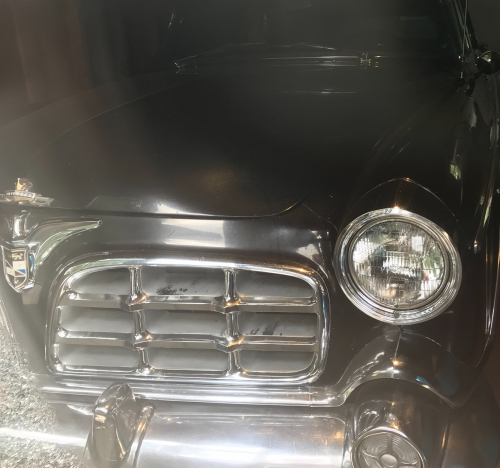 The elderly docent who greeted us in the living room apologized for sitting as he did so, but he had reached the age where standing was too hard on his feet. He did not seem to know how to silence his phone calling pre-recorded to remind him of a doctor’s appointment—he told it to “shut up” once or twice before at length shutting it off. He had once been a building facilities specialist in the military and had at that time been granted Top Secret clearance. People would call him for help even after retirement, and he tried to avoid them because, after all, he was retired—ask the new guy—but he could usually be prevailed upon to tell how to adjust the air conditioning up or down—nothing is straightforward when it has government overtones.

I learned all this because after his speech, While others were roaming the house, I asked him whether he had ever seen the movie ‘Guarding Tess.’ (He had not.) The reason that I asked him that was because he had related before the group grapevine reports that Mamie, Ike’s wife, would make the secret service take notes on her soap operas whenever she was not able to watch them in person, just the sort of thing that Tess, the fictional former First Lady of the movie would have done—though otherwise there appears no similarity at all—do not think I am suggesting that the movie was modeled after the Eisenhowers.

Eisenhower, a recent West Point graduate, had wanted to see action during World War I, but they stuck him in Gettysburg instead in order to head up Camp Colt, a training ground for the Army’s new Tank Corps. He trained his untested volunteers so well—their first task had been to get over the flu they all came down with—that, by the time World War II came about, he vaulted over many more well-known prospects to eventually become Supreme Commander, not just of American forces, but to all Allied Troops.

In his almost embarrassingly modest back enclosed porch (for a president), he liked to watch Westerns as the day wound down. Gunsmoke was a favorite. In this he was just like my Dad, who also liked all Westerns, but would reliably emerge from his den like clockwork only when he heard the Gunsmoke theme music that heralded Matt blowing away yet another miscreant in the street who had drawn his gun first—they always did, the louts—and Matt always outdrew them, saving Dodge City once again. 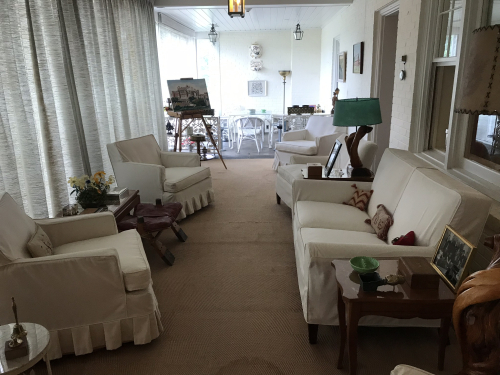 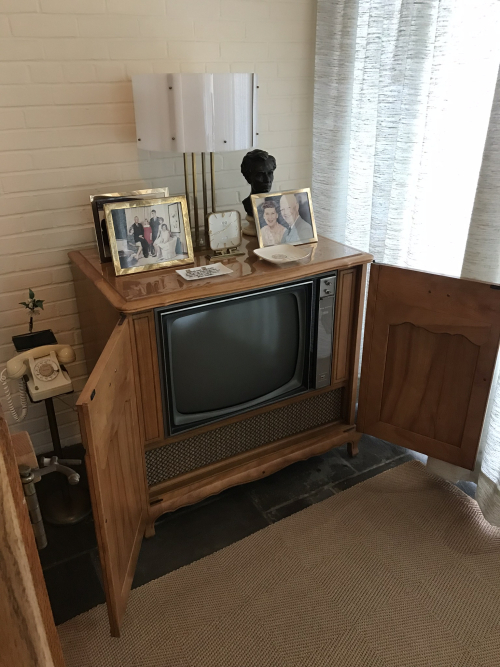 An odd and unusual door stop caught my wife’s attention before it did mine. It was metalwork—a statue of Jacob wrestling with the angel, about 8 inches tall.  Maybe his Jehovah’s Witness mom had given it to him with the note ‘Do you remember?’ I entertained for a split second, but dismissed it immediately. Of course he remembered it—the biblical scene has for centuries been fair game for painters and sculptors alike. Or maybe he didn’t remember—or if he did, he was not swept off his feet with appreciation for it. I mean—come on!—a door stop is not an especially honored place for a work of art. It beats weighing down the toilet handle so the water doesn’t run, but still... 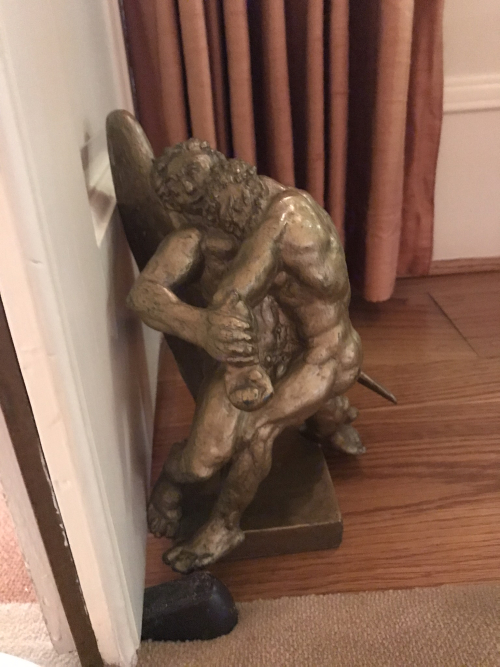 I decided I would ask about that statue, because the subject had come up recently in another connection. Did the ranger (not the one in the living room) know where it came from? No, she said, she did not, but she then dove into the task of discovery with surprising gusto. There is a master log of every single item in the room, if not the entire house. She led me to it and we combed through the pages together.

Ah - here it is. It was a gift presented to the President in 1955 by the Swedish artist Carl Mille, and he used the biblical story to symbolize the present struggle for world piece. How much do you want to bet that before he came calling—hopefully, he didn’t just drop in—Mamie Eisenhower (who kept everything, the docent stated) retrieved it from the humble spot she probably put it in to begin with, spiffed it up, and displayed it prominently on the mantelpiece. I learned that trick with regard to my in-laws ages ago. Ike really didn’t get as much use out of his house as he would have liked. No sooner had he bought it, at the conclusion of the war, then Truman asked him to become leader of NATO, which meant living in Europe. Afterwards, elected President of the United States, he would have spent more time in Washington than his Gettysburg home. He willed his home to the National Park Service. After that, he lived but a few years until heart trouble—he had been drinking 25 cups of coffee per day—confined him to nursing facilities. The Park Service granted Mamie permanent occupancy until her health, too, failed. At that time David Eisenhower, the son, told family members to remove the keepsake items they wanted from the home—but make it sparing—and from that time on the farm home and surrounding ranch became the haunts of Park Rangers and docents. The view is spectacular—no wonder the Eisenhower’s liked it. The entire Gettysburg area is gently undulating landscape—the perfect spot for the epic battle of the Civil War 80 years before he and Mamie moved there. It is what went through our minds as we took the shuttle bus back. 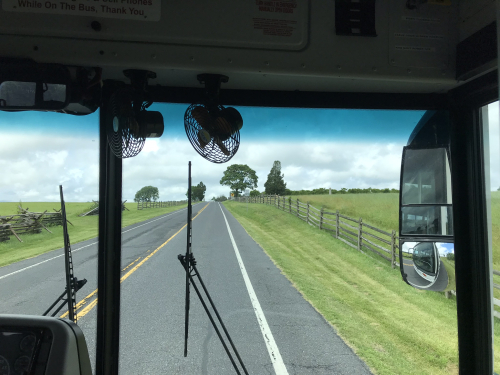 Posted at 08:53 AM in Presidents (US) and Statesmen, Travelogue | Permalink | Comments (0)