A Lot of Work to Syphon Out the Liars

“As much as I hate "conspiracy" theories”

As near as I can tell, Jehovah’s Witnesses buy into conspiracy theories in no greater proportion than the general population. It is a little surprising, since they have become privy to the greatest conspiracy theory of all—that involving religion having deviated so far from its source

As for me, I find myself nibbling at the edges, and in some cases accepting them. If I follow anything on Twitter, I make a point also of following its polar opposite. Sometimes I find the polar opposite point of view to be represented much more persuasively than the common wisdom.

“...After a while, one can develop an entire framework of areas (and players) where such admissions happen more often than others. When the pattern of 1)position, 2)slip-up, and 3)method of backtracking to regain the original position becomes very predictable, then you are probably onto something trending toward truth.”

That’s a lot of work to syphon out the liars.

That’s not to say it is not a good idea, nor that it is any more time-consuming than what I do. It is just that few people have that kind of time. Most people take news from one or two sources, often the evening TV news for people our age, and pretty well accept that they are being told the truth. Usually they are, but it is not “the whole truth and nothing but the truth”—which can completely turn things around.

At one pioneer meeting the elder conducting it was highlighting the importance of neutrality, and never to give the impression of taking sides. “Now we all know that Trump is crazy,” he said, “but.......” I would stake my life on it that his only source of news is the evening news of one of the three networks.

I was relatively up in years before I discovered to my surprise that my (non-Witness) Dad cared hardly at all about politics. Many were the political discussions swirling around the dining room table, as I was growing up, when the extended family was gathered. However, it turned out that my Mom’s father was very much a GOP person and would crank on about it endlessly, and my Dad was just too gracious to tell him to zip it—it was his father-in-law, after all, who his wife liked. 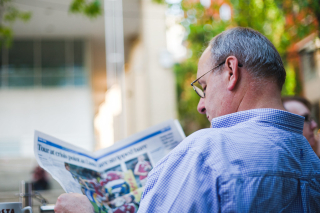