Another Day on the “Recruiting” Trail - Sheesh

One college kid asked, when I proposed returning, “To what end?” It was a question  I’d not been asked before.

I explained that in my ideal scenario I would return 100 times and engage in 100 different conversations and on the 101st I would ask him if he wanted to be a Jehovah’s Witness like me and at that time he should say ‘No.’

I even asked him to rehearse. “Let me show you how it would work. I am going to ask you to become a Witness like me and I want you to say “No.” Would you do that? He agreed.

“You see? Nothing to worry about. It’s just conversation. You’ll learn your way around the Bible in the meantime, if that is something you want. The moment you tire of it, just let me know. No one is easier to get rid of than Tommy. You almost have to beg him to stay.”

The anticult people try to spin it as “recruiting.” That’s why the outrage some have over the recent letter expressing condolences over someone’s loss. If they just took it at face value, they’d be okay with it. We should not let those scoundrels define the game.

Are we “recruiting?” I suppose so, but in the most non-threatening way possible, so that only by really stretching the point could we be said to be doing it. And it is not an immediate goal—telling the good news of the kingdom is.

I always explain my motive: “And this good news of the Kingdom will be preached in all the inhabited earth for a witness to all the nations, and then the end will come,” says Matthew 24:14. Who should be expected to do that other than those who have come to believe it? And no, it is not the end of the earth. But it is the end of the present “system of things.” Earth divvied up into a couple hundred eternally squabbling nations is not God’s idea, and the time will come when “thy kingdom come, thy will be done on earth, as it is in heaven.” I mean, presumably it all runs pretty well up there and God’s will rules the day, but it sure isn’t the case here, is it? That’s not to say that “God’s will” loses out each and every time, but it can hardly be said to be the norm, can it?

(I didn’t actually go through the rehearsal with this kid. Our best lines always occur to us too late. But that does not mean that I won’t do it when the situation is right.) 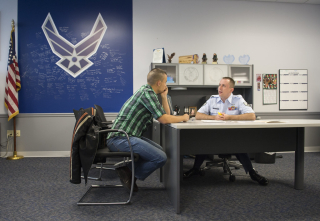