The Author in the Dog Park

I always walk laps at the dog park. I am the only one I have ever seen do so. I don’t know why. When there are other people, they just stand around; sometimes they chat with each other. I am not anti-social, but I can use the exercise every bit as much as the dog—why should he get it all? Walking this fellow has taken 30 points off my blood pressure.

Someone I have not seen before enters the park, and to my surprise, when I start my laps (about two and a quarter miles—I have calculated by pacing it off), he starts walking with me. That’s good. We chat. I say I have never seen him before and he says that he has been out of the country. I ask the reason. He says he is an author of science fiction and he has returned from one of their book conventions. I tell him that I write too—now that the kids are gone and the bills are paid, I get to indulge some interests, and writing is chief among them.

Now, whenever one writer meets another, there is some gentle probing so to determine who is the more successful. You don’t want to appear full of yourself. Best to say something modest, which in my case is entirely appropriate anyhow. So I told him how I had read the following career advise somewhere online:

My companion said, however, that it was not true with him—he was able to make his living through his bookwriting. He was very modest, saying again and again that he was very fortunate, and also that he was in just the right genre—science fiction. I gave him a card for “Dear Mr. Putin - Jehovah’s Witnesses Write Russia” and he could not stop asking about it—drawing out from me the story of their persecution, which he knew nothing about. “Watchtower—are they the Mormons?” he initially said.

I am not the Jehovah’s Witness who goes on and on about his own cause and will not let another get a word in edgewise. Quite the contrary. I consistently tried to change the subject back to his writing, and he would not let me. He came coming back to my work. He had no issue at all with my book being free, as my first two were not. “Of course,” he said, “it is a labor of love. You want to get a word out.”

We talked a lot about the marketing of books in all their forms, of which he knew far more than I. It was gratifying to learn that, while there were many things that I did not know, there was nothing that I DID know that was wrong. I told him of my plans to eventually release the books on audio, and how I had been stymied by the CreateSpace site after it merged with Kindle. He said not to even bother with print—he sells ten times the audio versions that he does print, though he qualified his remark that much would depend on the genre.

He had only been to the park once before. He is single, devotes all of his time to writing, and only breaks for the sake of walking his dog. Through some chit-chat on the nature of dogs, he mentioned that the only other time he was at the park, someone else kept walking around doing laps while his dog humped other dogs. “That was probably me,” I told him, and he threw himself into contortions saying that he was sure it wasn’t. No, it probably was, I told him. I have never seen anyone else walk laps—but he swore it was someone else.

It may be as he said, because mine doesn’t really hump other dogs. I mean, he is not obnoxious about it—it is just occasional—rarely does he even give a thought to it—and if he gets that way, I intervene as soon as I am aware. The mutt is fixed anyway.

As he talked about his work, I said that I would love to read some of it. I tried to set up some sort of relationship with him, but, nice as can be, without a bit of pretentiousness, much less condescension (which he would have had every right to do, publishing-wise), he said that it would not happen—he is totally immersed in his science fiction, his books and his fans, and he wouldn’t have time to develop new relations. Essentially, he has no life otherwise, and right now he is consumed with his career. I never did receive any of his work through the email address I gave him, and haven’t seen him since. Ah, well. Did it actually even happen? 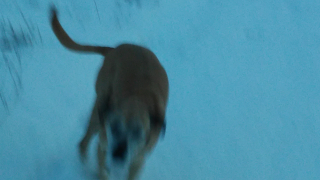