“Why so much foul language? I don't see how Jehovah can approve of that or the necessary disregard for many of the friends' consciences.”

“Sorry, Tom, After spending a couple of hours reading your blog, I’ve changed my mind.”

Not a problem, John. I appreciate your taking a look at it. I consider that everything that I write about spiritual things is loyal to Jehovah’s earthly organization, EXCEPT for counsel not to engage with some of the types that I do. Why I do what I do I have explained in several places, such as here. As an FYI, the elders of my congregation are aware of it, as is the organization, because I have written to them. What they think of it I do not know. I have written the 4 ebooks that I have and have never been given any feedback about it. Best to you in your service to our God.

“Why so much foul language? I don't see how Jehovah can approve of that or the necessary disregard for many of the friends' consciences.”

It is for two reasons. One is because of the challenge of writing to two audiences—Witnesses and non-Witnesses. My books are not primarily for the friends, especially Dear Mr Putin and TrueTom vs. the Apostates. I hope they like them, but they are not the primary audience. They are written in the hope of changing perceptions of some in the greater world, especially those who may be able to afford us relief or mold popular opinion. The interested journalist and policy-maker class is who I am aiming for. With non-Witnesses primarily in mind, I think of the language as actually quite mild. If you use foul language all the time, as many do, it becomes just lazy, provocative, and disrespectful speech. But it you use it very sparingly, it becomes like the spice—occasionally something off-color is exactly the right terminology to make a point. There is one person I follow on Twitter precisely because of the contrast between the outrageous language he employs and the basic refinement and decency of the man himself.

The second reason I go off-color sometimes is that “bad associations spoil useful habits,” and I should take to heart more what you say. I have no bad associations in person, but one cannot spend any time on social media without encountering massive quantities of it, and it rubs off. You are not the first one to point out what you have about language. The last one triggered my cleaning several instances of it up, but it sneaks back in again.

I think that the friends are on such a spiritual island—even if they think it a paradise island—that they have become oversensitive to what is not, in the greater scheme of things, an especially egregious sin. I also rebel at the thought that there will always be some who “strain out the gnat, but swallow the camel”—their language may be impeccable, but they do things that are far worse. But it doesn’t matter what I think. I am on that island, too, and I should not bring onto it what offends. I will be readjusted by you about this, and I will try to not go that way, and even take it out where it already exists. it is good counsel and I thank you for it.

Much of what I write about controversial things I have never heard anyone say before. Partly this is because that we are so much ‘no part of the world’ that we have forgotten how the world thinks, and are not good at answering it on its own terms. I read and write all the time—it is not really to my credit that I do this, but in this case it comes in handy—and I have gotten good at answering them on their own terms. I go on social media sites because I feel able to supply what some of the friends will find helpful, and to be sure, it is an interchange of encouragement. But I don’t really go online for the sake of making friends, for like most of us, I have a circuitful of real flesh-and-blood friends that I never have to wonder about who they really are.

Thanks, John. It is good counsel on language. I will take it to heart. Whether that resolve holds remains to be seen, but I will try to make it so.

....Hmm. You know, there is quite a bit to clean up. Did I really rebuke the National Historical Park Service with “It is history, dammit, get it right!” No more! Now I merely observe that history is their reason for existence—they ought to get the details right. And did I really say that certain opposers are “batsh*t crazy?” No more! Now they are “loony-tunes” crazy. I admit, I don’t like it as much, but it is not about me. 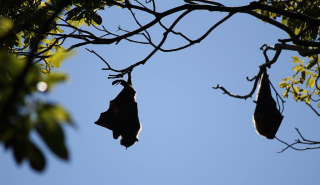