Your first impression of Wolf Mountain is that it really is a mountain. This may not be obvious at first—my friend and I arrived 20 minutes before opening time, and the only thing that was obvious was that we were in the middle of nowhere, a few miles outside of Smyrna, NY. When opening time came, the keeper did not drive up from outside as I has supposed she would, but she descended from within, leaving one to suppose that she had slept with the wolves. Follow her through the gate, up into the compound and notice the sign advising you to drive slowly up the dirt road. Unless you have 4-wheel drive (we did not), you cannot drive any other way. 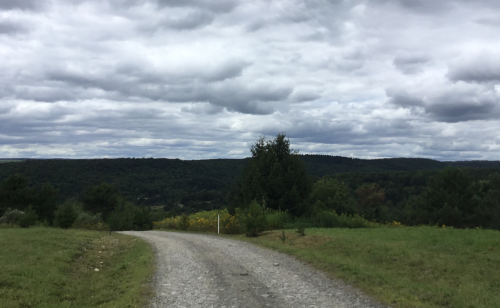 After taking in that you are really up there, the second thing that you notice is that these people are truly serious about their wolves. Were a visitor to fall into an enclosure, it might not be as it was with Harambe, the Cincinnati gorilla—the sharpshooter might take you out instead, sparing the wolf. A sign at the entrance demands attention—if you annoy the wolves in any way, you will be asked to leave. If you refuse, staff will call the police. 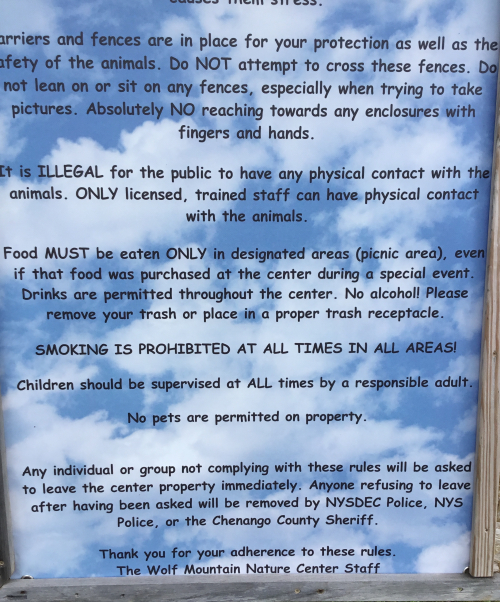 Well, they wont get any trouble from my companion, who is pushing 90, and who—alas!—has declared that this is his last major excursion—he had to stop and rest a few times this time around. He is such a nut about wolves that his home congregation has named him “Wolfman.” His love of wolves extends to all canines. When making return visits, the way Jehovah’s Witnesses do, he forgets the names of the people but never their dog. “Let’s go pay a call on where Prince lives,” he will say—a partiality that generally gets him farther than if he had remembered the people.

It is on his account that I have made the trip. I came across the closed facility months ago and thought it was something that he might like. It turned out that he knew all about it, but had never been there. I thought that he might decimate the gift shop halfway through the tour, but he showed admirable restraint. So many people have given him stuffed wolf toys, wolf attire, and the like that he barely has room to move where he lives. He was mildly disappointed with the refuge, for he had watched many YouTube videos of snuggling with the wolves and had imagined himself doing the same.

Our guide was leading his first-time-ever group. He was a graduate of the nearby forestry school in Syracuse and his goal is to one day enter the National Park Service. For now, he is paying off some bills running a landscaping crew, and he volunteers here at Wolf Mountain. The wolves are getting acclimated to him—they notice right away anyone new, and they notice when anyone is on the grounds after hours, which are fairly limited. (Guide is in maroon shirt and backpack. Wolfman in blue shirt and gray hair)

Staff regards each wolf as family. There are placards introducing each individual, and upon leaving, one encounters a group goodbye from them. 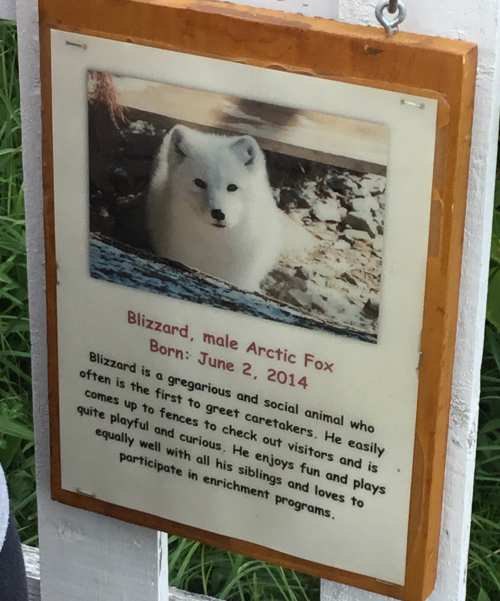 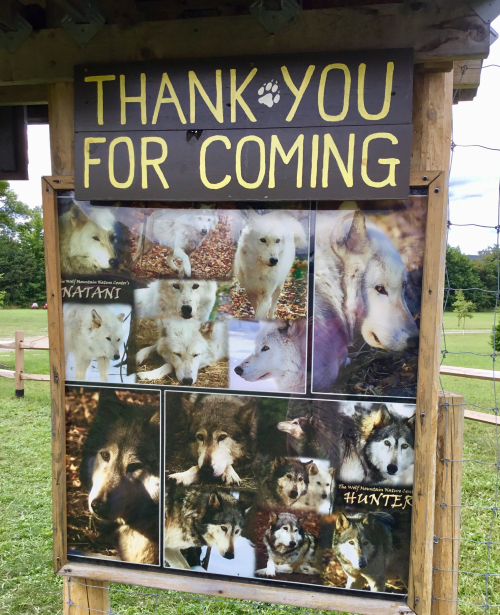 The owner, like Wolfman, is essentially a wolf nut, who devotes all his energy to his wolf sanctuary. It is privately funded—that is, mostly not at all, other than admission fees and donations of road kill for food. He ventures out to buy 500 pounds of chicken legs per month for the animals. He welcomes donations of chicken, ground deer meat, deer hearts and liver, buffalo, elk, and pork hearts. He does not want woodchuck, birds, innards from slaughtered animals, or wild game not legally obtained. He is also a Native American, and a side theme of the place is preserving Native American culture. 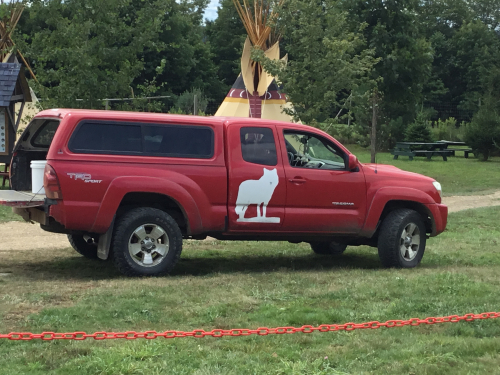 Oddly, Wolfman, whose father died before he was born, believed and told one and all throughout his life that he was a Native American of the Mohawk tribe. His Inuit appearance easily gives that impression, so it was questioned by nobody. In his later years he took one of those ancestry DNA tests and discovered that he had not a drop of Indian blood in him!—he was mostly Swedish. The revelation came a little late to turn around a lifelong affinity for Native American ways, but even in his heyday he had not taken personally the atrocities done to “his” people—it was just one more example of man’s inhumanity to man, and there were hundreds of examples.

The American Zoo Association decrees that there should be a minimum of 5000 square feet for every two wild animals. Wolf Mountain easily exceeds that, said our guide. I didn’t know about such a rule, nor did the guide know when it had been implemented (which would not affect Wolf Mountain, anyway, since it is independent of that body) but it led to my remark, agreed to by all those of my age, that zoos used to be jails for animals and that now they are much less that way. 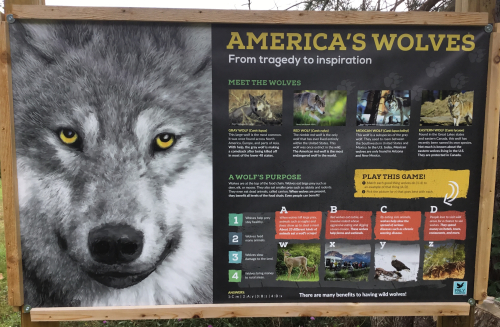 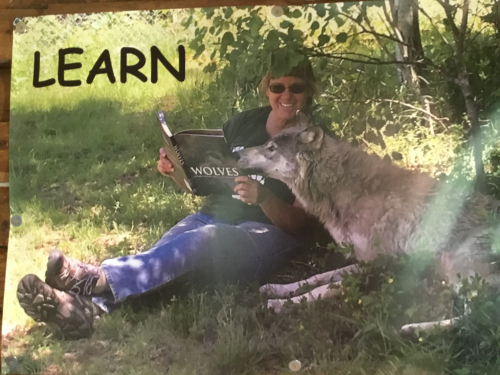 Interactive posters are on display everywhere—education is a goal of the center. There are many myths about wolves that the staff is eager to dispel—that they are biding their time to eat you is one. In fact, where their habitat is not under attack, they generally withdraw from human contact. I had been worried in snapping photos that the fence in the foreground would draw the camera’s focus, but my iPad did not have that problem. To be sure, I took no pictures in which the wolf wasn’t just behind the fence, so I suppose that it was not a real test. 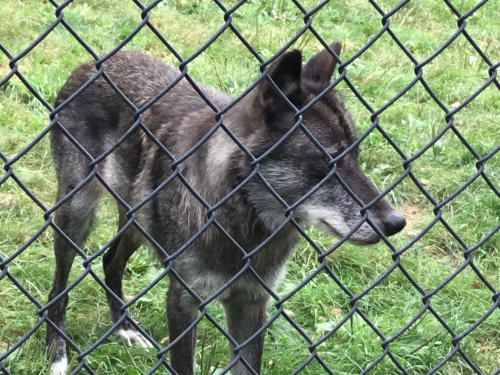 The air was crisp, dry, and about 70 degrees the day that we visited, The wolves were skipping about and happy—they had been overwhelmed and lethargic during a recent hot and humid spell. Never mind the big eyes and the big ears of Little Miss Riding Hood—it is the big feet that grabs your attention—webbed feet that enables the animal in snow and water. The guide had been part of overnight camping trips on the mountain, in the tepees. He assured all that nothing was cooler than looking up at the stars with wolves howling in the background. When you hear them doing that—which we did briefly during our visit—you forget all about those interactive posters telling how nice they are, and are reassured that they are securely fenced off in their own quarters. 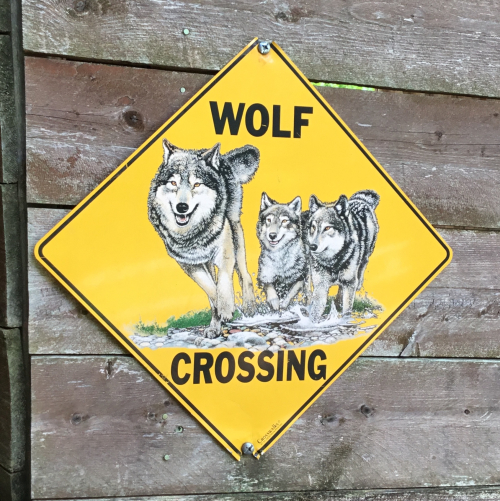