Home Archives Profile Subscribe
Jehovah’s Witnesses Slammed in Phoenix
Did you Find Everything that You Were Looking For?

I haven’t written any Bob Dylan posts for a long while, and I wouldn’t have written one today, except that the dryer broke. That meant—with my wife looking on approvingly—that I would be spending precious time hanging stupid wash on the line! It’s ridiculous!

Of course, as I was doing so, the lyrics of Maggie’s Farm came to mind:

Well, I wake up in the morning/Fold my hands and pray for rain

It's a shame the way she makes me scrub the floor

I ain’t going to work on Maggie’s farm no more.

This prompted me to investigate further in (of course) Wikipedia, where....gasp!....I discovered that the most bedrock and undisputed fact in the musical universe is, in fact, not so!

Bob Dylan rose to fame on the strength of his folk ballads. We all know that. We also all know that he reinvented himself, and has done so several times since. We all know that, at the 1965 Newport Folk Festival, he was roundly booed, and we know the reason why: he went on stage with electifried sound, and the snooty purists there stuck up their nose at anything not acoustic. I mean, we all know this!

We all knew wrong! It is another “Everything You Thought You Knew About Such and Such is Wrong” headline. I am coming to think that there is no reason to accept anything anymore. If a pitch is not to your liking, just lay back like Casey and wait for one that is. Unlike Casey, you will get more than three. You will keep getting pitches until the cows come home. Just wait for one you like. Everyone else does—why should you not as well?

“There are reports of me being anti-him going electric at the '65 Newport Folk festival, but that's wrong. I was the MC that night. He was singing 'Maggie's Farm' and you couldn't understand a word because the mic was distorting his voice. I ran to the mixing desk and said, 'Fix the sound, it's terrible!' The guy said 'No, this is what the young people want.' And I did say that if I had an axe I'd cut the cable! But I wanted to hear the words. I didn't mind him going electric.”

It was all a lie! The folk people didn’t mind him going electric that night. Someone else on the program had already gone electric and nobody had lost their cookies over it. This is just the result of some revisionist falling over himself to paint a titanic “Clash of the Cultures” when in fact there was none! “Bob’s going electric?” is more like it, “Well, what d’ya know? Wish we could hear the words.”

This is only the beginning of the woes for ones who suppose that critical thinking will save us. For the ones steadfastly filling the leaky vessels are not the careful and wise ones, intent upon safeguarding knowledge. As often as not, they are yo-yos and liars, concocting their own version of events so as to sway viewpoints their way. Sometimes they are deliberate frauds. More often they are sincere persons truly doing their best but, since we are all molded and skewed by our own individual experiences, one must analyze in detail even the most mundane and obvious statement—in this case that the folk singers were shocked at Dylan changing the genre. With him, there is almost nothing that has been related accurately. Even his supposed leadership role as a counterculture icon is all wrong.

Are people inclined to analyze in detail even the most “mundane and obvious” statement? You know that they are not. But even when they are, the fact remains that nobody has the resources to do it—the disposable time of any given individual is very, very small. For many, it is effectively zilch. Plus, there is much to compete with that disposable time, and most often entertainment wins out over research. Stacking the odds even more is the habit of some to hide matters in a barrage of irrelevance (that is not to say that THEY regard it as irrelevance), muddying the waters, to the point where people say: “Ah, to blazes with it! They’re all liars anyway!” When this happens, as the saying goes, “the terrorists [to human knowledge] have won.”

And yet those of critical thought strut around on the world stage as though their grasp on the “facts” makes them invincible. It is as Jack Nicholson said to Tom Cruise in the movie: “You can’t handle the truth!” We leak away the true facts in no time at all, and compensate for it by tapping the minds of pillars who have also leaked away the true facts.

Alas, “critical thinking” will not save us. It may even make matters worse, for who has not noticed that those who harp with greatest tenacity about critical thinking invariably assume that they have a lock on the stuff? One of our first conclusions as to critical thinking ought to be that we are not very good at it. Nope. It is the heart that will save us—not the head—the heart refined by spiritual principles that are true, that have emanated from a Higher Source, that have the greatest odds of mending the earthen, leaky, flawed vessels that are us.

Now, as long as we are at it with my hanging clothes on the clothesline until the repairman comes—if he comes, because when this post is written I will explore fixing it myself—I fixed the dishwasher, after all, when it did not heat, so maybe the dryer will also surrender its secrets to me, even though I still remember that time decades ago when I scorched the clothes in an attempt to fix another recalcitrant dryer. At any rate, Dylan’s Clothesline Saga comes to mind (I am done with ramifications to critical thinking; read on only if you care about Dylan):

After a while we took in the clothes

Nobody said very much

Just some old wild shirts and a couple pairs of pants

Which nobody wanted to touch

Mama come in and picked up a book

An' papa asked her what it was

Someone else asked, what do you care

Then they started to take back their clothes

Hang 'em on the line

It was January the thirtieth

And everybody was feelin' fine

The next day, everybody got up

Seein' if the clothes were dry

The dogs were barking, a neighbor passed

Mama, of course, she said, hi

Have you heard the news he said with a grin

Where? downtown When? last night

Well, there's nothing we can do about it, said the neighbor

It's just something we're gonna have to forget

Yes, I guess so said ma

Then she asked me if the clothes was still wet

I reached up, touched my shirt

And the neighbor said, are those clothes yours

I said, some of them, not all of them

He said, ya always help out around here with the chores

I said, sometimes, not all of the time

Then my neighbor blew his nose

Just as papa yelled outside

Well, I just do what I'm told so I did it, of course

I went back in the house and mama met me

And then I shut all the doors.

It took me years to realize that this song is a parody of Bobbie Gentry’s “Ode to Billy Jo,” which dominated the charts in 1967. That song revolves around a horrible tragedy—Billy Jo jumped off the Tallahatchie Bridge, and what hidden and unnamed inner torment might have caused him to do that? The event is related in the first person at a rural Mississippi dinner table, where it must compete for attention with the most banal and ordinary conversation of the adults. It is a “teenage self-pity song,” as Garrison Keillor would have put it.

In Dylan’s parody, the conversation is even more banal, and the “tragedy” is outright ridiculous:

Where? Downtown When? last night/Hmm, say, that's too bad

Well, there's nothing we can do about it, said the neighbor/It's just something we're gonna have to forget

Yes, I guess so said ma/Then she asked me if the clothes was still wet

and Bob sings it in the most laid-back and uninterested drawl that is a hoot in itself. He really is pretty clever. Alas, I can no longer find it on YouTube. There is a pretty good version of it from The Roches, but to a purist, such as I used to think they were at the Newport Folk Festival, only original will do. It may even be that the song will get increased recognition in a modern context, from political zealots, on account of it underlying tragedy: “The Vice-President’s gone mad.” 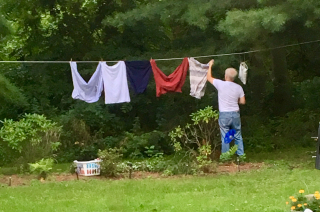