Home Archives Profile Subscribe
When Someone Says: “I Have My Own Religion.”
Still More Games

The traveler just arrived at the whistle stop town asked what folks were like there. The geezer just sitting around responded by asking what they had been like where he had come from. “Aw, they were just great people! Friendly, warm, helpful,” the visitor replied. “I think you’re going to find people here are pretty much the same,” said the old guy.

Another visitor arrived on the next train and asked the same question—what were folks like here? As before, the geezer countered—what had they been like there? “Miserable. Just plain ugly. Backbiting. Hard to get along with.” “You know,” the geezer said, “I think you’re going to find folks here are pretty much the same.”

To set the story up—the moral of which is that people are to a large degree what you focus upon—the circuit overseer had prefaced a history of the locomotives. In the early days, they had to stop every 100 miles or so in order to refuel with wood for the tender and water to make steam. So towns sprung up about that distance apart.

It is true of many transportation modes. The Erie Canal, connecting Buffalo to Albany, triggered quick growth to several former villages in between, most notably, Rochester and Syracuse. Buffalo—at one time the third most populous city in the country—became so because it was chosen as the western terminal. Had the competing village of Black Rock won out instead, nobody would have heard of Buffalo. 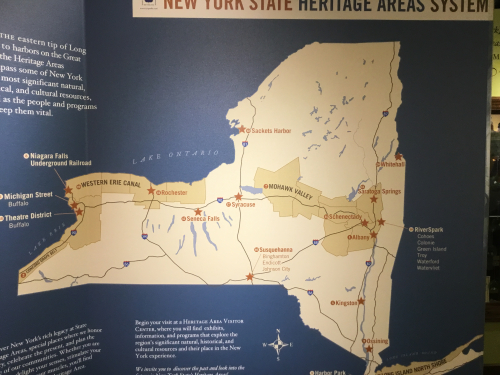 The New York State Thruway, its first section completed in 1954, connects these cities as well, though it skirts well south of Rochester. I can, as a boy, recall politicians of that town grumbling that, whereas Syracuse had five exits on the Thruway, Rochester had only two, and—well—it just wasn’t right. This was partly remedied with 490W extending from the city 20 miles to the west to connect to the big road, but even so, three is not five, and the more exits there are, the easier it is for commerce to take place.

The tolls on the mighty road were meant to be temporary, but the politicians got used to them, and they will no doubt exist until Armageddon. “Worth every penny!” I tell the toll-collector, which they always appreciate, though one in Geneva said: “It is not!” It appears that he will soon be out of a job, because the plan now is for cameras to scan license plates and access tolls with no human interaction at all, and the governor is making everyone in the state switch (for $25) to a new design of plate easily read.

Prior to the Thruway, U.S. route 20 was the primary east-west corridor in New York State. This road scoots well to the south of the Thruway cities, and connects ones that have not grown so quickly, or have even shrunk at being ignored by the big road—places like Lancaster, Geneva, Canandaigua, Auburn, Morrisville, Waterville, and Sharon Springs. It is the road we used to take, prior to the toll road, when visiting the region north of Poughkeepsie where my Dad’s people owned a dairy farm—years after everyone left their agrarian roots, we still referred to family reunions as “going down to the farm.”

Then there is N.Y Route 5, another east-west corridor, and this one does link—like the Thruway—the big cities of Buffalo, Rochester, Syracuse, Utica, and Albany, plus a new assortment of smaller towns. The big names I well remember as highway markers along the never-ending drive to and from the reunions, occasions for my young siblings and I to whine from the back of the station wagon: “How soon till we are there?” until my fed-up dad would again holler: “If you kids don’t stop crying back there, I’ll stop this car and give you something to cry about!” I thought that he was being mean then. I did not think of him then as a sage prophet for latter times, for sometimes that is exactly the answer that must be given.

All of these routes—from canal to Thruway to highway—are means of going in a straight line, from point A to B, or A to C via B, or A to D—and so forth. You take them if you want to get somewhere. But if you don’t care about getting somewhere—if you just want to meander, you take N.Y. Route 80, which runs from Lords Corners to Tully to Georgetown to Smyrna to Sherburne to New Berlin to Cooperstown to Nelliston. Never heard of these towns, you say? No, you haven’t—except for maybe Cooperstown because the baseball museum is there.

Why would anyone want to connect these towns with a N.Y numbered route? Your guess is as good as mine. These are not straight line towns. They are more like connect-the-dot towns. The route follows various waterways and stage coach turnpikes of long ago. As the crow flies, the east and west terminals are only about 80 miles apart, but the roadway must be at least twice that.

At times, it seems that the locals have stretched pretty hard to find history where perhaps not much of it actually occurred. Such is the case with a marker for the Beaver Meadow Hotel, which “provided an overnight rest stop for guests passing through the area” in its day. I mean, didn’t all hotels do that? But this is not a New York State marker, even though that is what it looks like. The state stopped funding markers in 1939, and it is left to the William G. Pomeroy Foundation to detail and commemorate community history of rural America. All is forgiven. It’s a good idea for a volunteer organization to recall what went down in this tiny locality or that, even if it would be silly for the state itself to do so. This also explained for me why so many New York historical signs—gold print on blue—are in deplorable shape. They don’t do that anymore, and it is left to someone else to notice and pick up the slack. 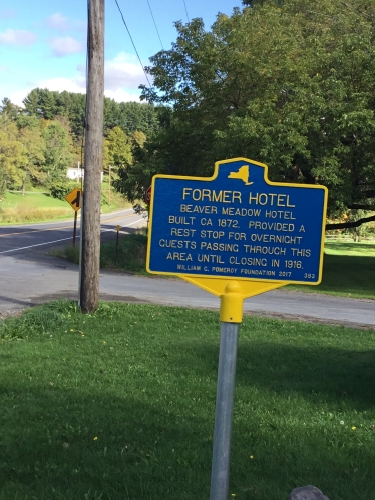 Route 80 also takes you through Smyrna, New York, and that’s hardly nothing, is it? That is the town you must go through (unless you go the back way) to reach Wolf Mountain, where “Wolfman” and myself enjoyed a fine visit not too long ago. And at Rogers Environmental Education Center, not too far to the east, I learned through a series of posters that New York has a state bird (the bluebird, though it should be a robin—nobody ever sees bluebirds around here), a state flower, a state fish, a state insect, a state mammal, a state tree, and a state reptile. And no, the state snake is NOT that politician you don’t like. Nor is he any lawyer. Don’t even go there. 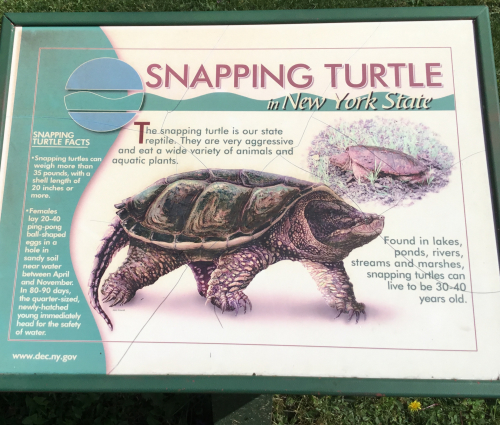 Come to think of it, I have never actually driven the entire roadway, just different segments of it at different times. I think that I have never driven through the mightiest stops on the route, such as New Berlin, population 2700. It doesn’t mean that I won’t someday, but always there are bigger fish—though not the state fish—to fry. But what I have driven confirms what some touristy website stated—that it is among the prettiest drives in the state—winding through lush hills and picturesque villages. It is one for someone who is in no hurry to get anywhere.