At the Bundy Museum—Binghamton NY

The Annex building at the Bundy Museum is a hodgepodge inside and out. Call it eclectic. How can you not call eclectic the place with the Broadcast Hall of Fame* in one room, 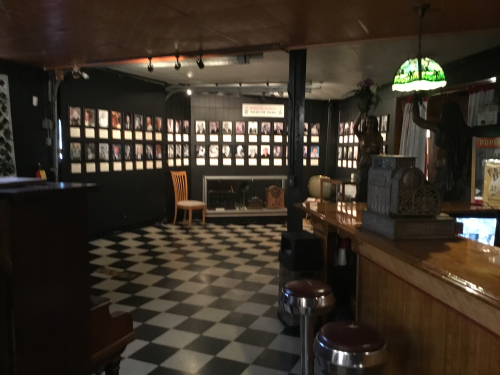 time clock evolution in another, 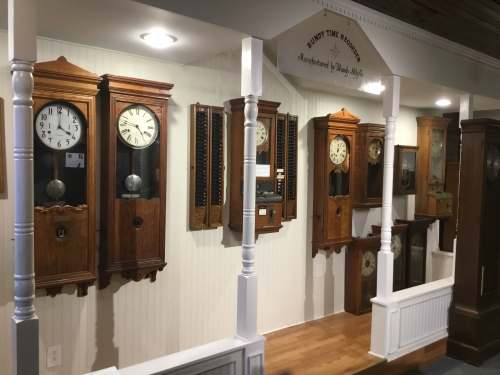 and Twilight Zone memorabilia in a third? 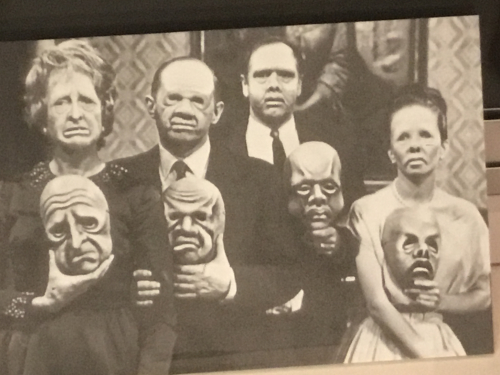 And a community radio station? And a transported barber shop? Watson insisted his IBM employees be neat as a pin—IBMers they were called—we had one in the family. He loved a local barber shop so much that it was uprooted—and there it is facing the broadcast wall. 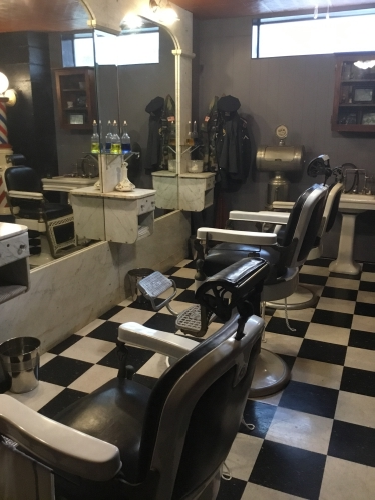 An adjacent building hosts the community darkroom and a traveling photo exhibit.

The first thing you encounter, though, before any of these other things, is a community theater. A horror flick was posted on the board. My wife, who knew nothing of our destination before arrival, said, “It is not THAT Bundy, is it?”

No. It’s not. It’s a common mistake, the docent said. This Bundy is the former home of Harlow Bundy, maker of time recorder clocks, whose company became the birthplace of IBM—International Business Machines. It’s a tenuous connection, but it is a connection and there is none better. Bundy’s company merged with two others in 1900 to form ITR—International Time Recorders. Then THAT company merged with two more in 1911 to form CTR—Computing Tabulating Recording Corporation. Then THAT company hired Thomas Watson who, once he rose to the top in 1924, changed the focus to tabulating machines and renamed the company IBM—International Business Machines. IBM divested itself completely of time recording clocks—Bundy’s baby—in 1958. Watson is inspiration for the voice of Watson, the IBM AI entrant that precedes Siri, Alexa, HeyGoogle, and all the rest of them.

So it is a connection. IBM today downplays it, deferring to the 1911 founding of CTR corporation, even celebrating the centennial of that event in 2011. If Bundy had his way, they would have celebrated 1911 (ITR) or, better yet, 1883, when his brother Willard invented the time recorder clock (in Oneonta NY, an hour to the NE) and Harlow convinced him to manufacture it on a large scale. 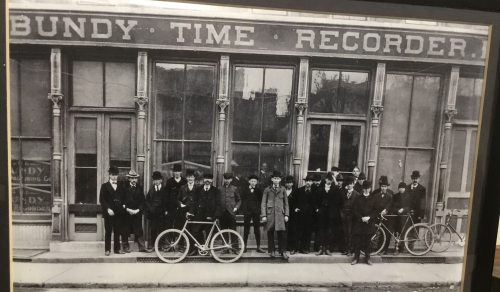 Harlow took it to the 1893 Columbian Exposition World’s Fair in Chicago (so-named because it was 400 years since Columbus had landed in America) and the recognition brought more orders than Bundy could handle, triggering rapid expansion, and a move to larger Binghamton. In 1895, the government said they wanted a Bundy time clock recorder for each Post Office.

Harlow excelled at spin. As much as workers hate to punch an unforgiving clock today, he promoted it back then as “dignified,” since it replaced the boss’s man logging in arrival time, or even the boss himself. Punctuality itself was elevated to a virtue practically on par with those virtues of Galatians 5:22: love, joy, peace, patience, kindness, goodness, faith, mildness, self-control. Add to it punctuality. Maybe punctuality even IS a heightened for of self-control. 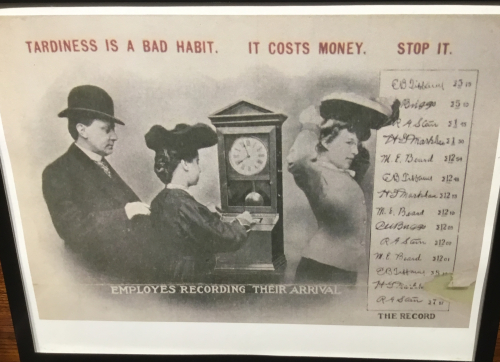 One wonders if Harlow would have found the modern AI phone tree also a “dignified” improvement over talking to actual people, who might be slow to grasp your non-standard concern, but wouldn’t just flat-out ignore it, telling you how important your call is while declining to address it.

Harlow wasn’t so hot on people skills, though. You have to probe a bit for this—the docent doesn’t just come out with it—but at my musing at the benevolent business dictators of that era who built company towns and radiated good will toward their employees—Milton Hershey was mentioned—and my query as to how many UNbenevolent business dictators there were, the docent ceded that Harlow would have been one of the latter. A “slavedriver,” was his reputation.

Maybe that proved to be his undoing—with his health and with his own brother Willard. The two had a falling out. Willard moved to Syracuse, found a competing firm, and the two sued and countersued each other till the deaths of both. I mean, this is not the sort of friendly rivalry that can be said to exist between my own brother and me—a rivalry as friendly as one could expect given that he is a no-good Scrabble cheat whom I almost never beat. No. This rivalry of Harlow and Willard was a bitter one that consumed the lives of both. Again, a scripture—because I am that type of guy: “A calm heart gives life to the body, but jealousy is rottenness to the bones.” (Proverbs 14:30)

It is too bad that IBM doesn’t own up more to its Bundy roots. If it did, it might then better finance the Bundy Museum and put it in more ostentatious trappings. On the other hand, maybe it is just as well they don’t. Maybe they would give it a more stuffy feel. Maybe it would lose its alluring eccentricities. The docent referred to his “campus” so often that I thought the museum part of Binghamton U. It’s not, though students frequent the 6-house non-profit organization, and may even rent some of the apartment there. They traipsed here and there during our visit, and they have even taken one of the upper rooms at the Bundy home to display what the docent called “angry art.” He didn’t disapprove, mind you. He likes the kids. He has kids himself in college. But he noted that the content might be different once they are out paying rent. 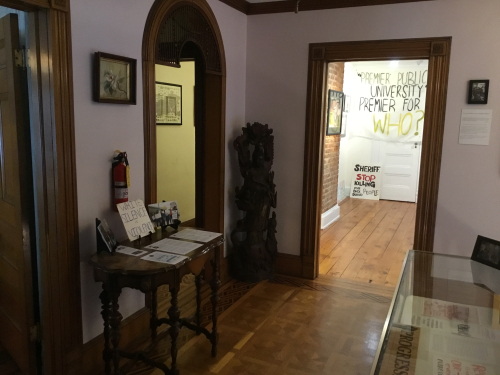 Harlow’s house itself is the gem that drew us. Only after arrival did we find the other stuff. It is of the Queen Annes Style, comfortable but not extravagant, with round turret on the side, making for a round sitting room and a round upstairs bedroom—the architect was just in his twenties. Harlow even pinched pennies in places out of public view, such as the pine boards that serve to floor the bedrooms. The chauffeur lived in the Annex building out back and slept above bales of hay kept for the horses. 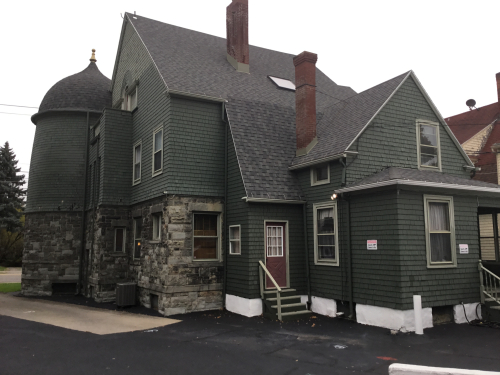 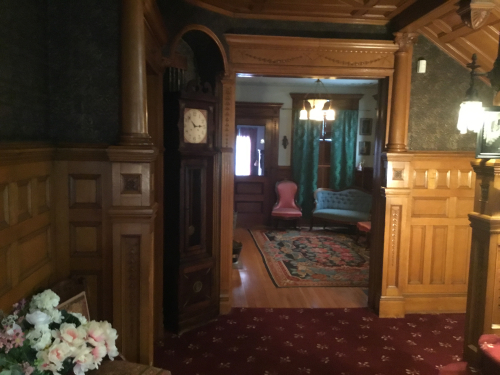 Willard Bundy had been a part-time tinkerer from Oneonta, a jeweler full-time. He invented (1885) the devise to record time. His younger brother Harlow set out to market them. The two formed Bundy Time Recorder—1883, formed in Oneonta.

Companies that merged in 1900 to become ITR—International Time Recorders:

Companies that merged in 1911 to become CTR—Computing Tabulating Recording Corporationn:

CTR renamed IBM—International Business Machines—in 1928. Profits for it first 20 years came mainly through the sale of ITR wares, of which Bundy was VP until retirement. It operated in the ITR building, where the Boscov parking garage now stands.

What I did not ask the Bundy Museum docent—I should have but I just didn’t think of it—he might have known—was whether there was anything to HAL, the deviant computer in 2001–A Space Odyssey, being but IBM minus one letter for each placeholder. It seems hard to believe that it was not, but Stanley Kubrick denied that it was so. *I instantly picked him out among the 300 wall-mounted photos. (Middle section, left top photo) “That guy looks just like Dick Van Dyke’s boss,” I said. It turns out that is exactly who it was. Richard Deacon was a Binghamton native. He was at his finest as Mel Cooley on the Dick Van Dyke show, eternally deadpan, the perfect and constant butt of all jokes. 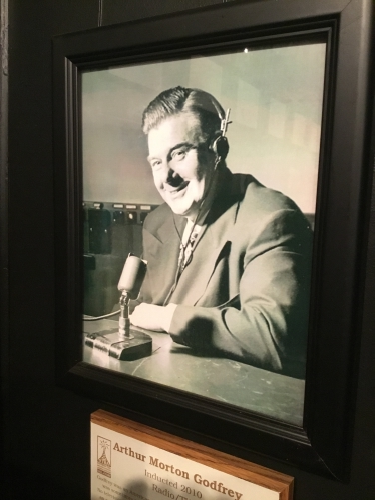 Arthur Godfrey was on the wall, too. He I just barely remember, and only by name—I knew nothing specific about him. But I looked him up. “The old redhead,” they called him, he with the folksy, home-spun manner—an enormously popular daytime host. His popularity diminished after he fired a lesser star on-air. Could it be he was more mercurial than he let on? For a time that lesser star, singer Julius LaRosa, ascended, while Godfrey’s descended. And to think that had once been the best of friends.

Needless to say, Rod Serling was also on the wall, but he is the subject of an entirely separate post.