Elder-care During the Windstorm

Windy mornings like we just had, and I think of the huge tree that came crashing down on the home of some friends in southern tier, pinning them in their bed. “This room is original, this one is new,” my pal later told me on a tour of his house that the friends had rebuilt. The upstairs bedroom—brand spanking new? His wife will not sleep in it. The tree no longer threatens—it came crashing down upon her already during that storm. But she will not sleep in that room again.

The exasperating thing about a power outage is that you keep forgetting. Flip a switch, nothing happens—continual aggravation. Well, I have my Go Kit ready in the event of a really huge natural disaster. Many think that the Witness organization dreamed up the idea, but it is actually the government, and the Witnesses said, “Yeah! Let’s get on that one!” I tend to put things like that off and for the longest time my Go Kit consisted of a bag of pretzels and whatever else I could scrounge up in 2 minutes. But now it’s in pretty good shape and I am preparation in search of a disaster.

Not every little thing is fully cared for. “Oh, did I tell you about my dog?” I will say to my temporary hosts as Samson tracks mud across their kitchen floor. That’s not Sampson of Bible fame, who pushes apart the pillars. That’s Samson the dog, who pees on them. Confused by the change, maybe he will even pee in the new residence.

I was staying with my dad, attending him in his old age, when another wind storm hit 3 or 4 years ago—wow-whee can wind ever do damage! “Have you entered the storehouses of the snow, or have you seen the storehouses of the hail [or the wind], which I have reserved for the time of distress?” Job 38:22 says. Yeah, I have seen them at medium throttle. I can only imagine what might happen when the pedal is to the metal.

Going back almost 30 years, my parents stayed with us for over a week. Ice storms paralyzed the entire region. Our electric line was laying right there on the ground—we didn’t come prop it up—but it was still delivering the juice. In one of those rare reverses of how this system usually works, the people with money, living out in heavily-treed areas, lost their power, but the people living within city limits did not!

Power went out to my dad’s during that windstorm 3 or 4 years ago, too, but not to me, and he again stayed with us until it was restored. By that time he had dementia. “I think we should swing by the house and see if the power has come back on,” he would say every 30 seconds.

Surprisingly, there is a time to lie. The elder-care people recommend it in the case of seniors with dementia. “How’s Jill doing these days?” he wants to know again and again. Why should I tell him again and again about the divorce in the family that will trouble him, yet he can do nothing about it? “Fine, Pop, she’s just fine. All of them are.”

Why should I tell him every day that his wife died 20 years ago—stabbing him each time? “She’s fine, Pop. She’s away to visit her cousin, remember? She’ll be back soon.” 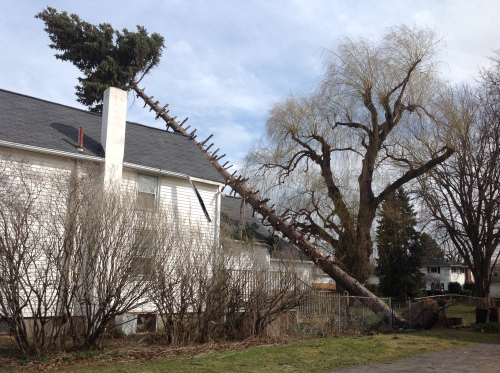