Man Gave Names to all the Animals

The beavers are hard at work out where I walk the dog. I wonder if they will cause back up flooding at the apartments where I don’t live. That outcome doesn’t concern them in the slightest. They will drive in upright poles and then fetch branches and sticks for the horizontal. Ponds form, and they use the waterways to float food and debris so as to build homes entered from below.

They are all of them skilled engineers, all of them graduates of Dam U. When the kids were small and we would camp at Allegheny State Park, visiting beaver dams was one of the attractions. You had to go early in the morning and be very quiet—alarm them and they will dive out of sight after slapping the water with their tails to alert their buddies.

“Now Jehovah God had been forming from the ground every wild animal of the field and every flying creature of the heavens, and he began bringing them to the man to see what he would call each one; and whatever the man would call each living creature, that became its name.” - Genesis 2:19

Bob Dylan has explained just how this worked:

He saw an animal that liked to growl, Big furry paws and he liked to howl, Great big furry back and furry hair. "Ah, think I'll call it a bear."

He saw an animal up on a hill, Chewing up so much grass until she was filled. He saw milk comin' out but he didn't know how. "Ah, think I'll call it a cow."

He saw an animal that liked to snort, Horns on his head and they weren't too short. It looked like there wasn't nothin' that he couldn't pull. "Ah, think I'll call it a bull."

He saw an animal leavin' a muddy trail, Real dirty face and a curly tail. He wasn't too small and he wasn't too big. "Ah, think I'll call it a pig."

Next animal that he did meet. Had wool on his back and hooves on his feet, Eating grass on a mountainside so steep. "Ah, think I'll call it a sheep."

So it was pretty much like that. The Watchtower—no doubt others have said it as well—has written that Adam would have taken his time, observed unique characteristics, before naming names.

Let me see if I can do one:

He saw an animal that was great and gray, Swimming about freely every day. Catching its food without a fuss, “Ah,—a hippopotamus.”

And God said to Himself, ’Oh, come on!’ but he went with it.

And just to bring this full circle:

He saw an animal building dams, flooding just like a jailbird on the lam, carving up waterways with a cleaver. ”Ah—looks like a beaver.” 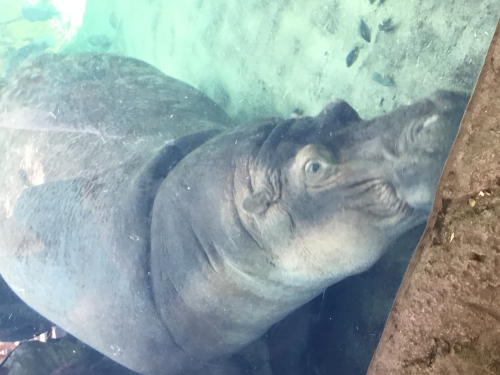