Not looking good. The lousy cheater just Scrabbled to make ‘loaners.’ 151 to 92. How much you want to bet that when I turn the blank over it is another letter? 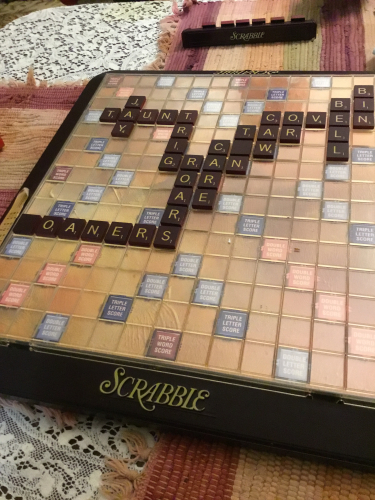 I painted a crosspiece on an ‘i’ and put the resulting ‘x’ to make ‘ex’ going both ways—the ‘x’ counted 6 times for being on a triple letter. Got to do something to keep up wtih my brother’s cheating. Even after his unfairly taking the triple word with ‘oh’ I am slightly ahead. 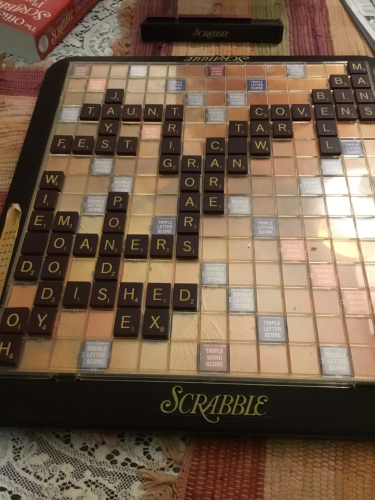 With few letters letter, my lousy brother probably has probably cheated to draw the ‘q’ and the ‘z.’ The trick will be to make him eat them. He will scream ‘We don’t play that way!’ but that is to be expected.

The rotter! Do you think he will open up access to the lower right of the board? No way will he if it gives me the chance make one point more! What a skunk! I guess I am forced to play the same way, but in this type of battle, being magnanimous to contrast his smallness, I usually give in. Not this time! 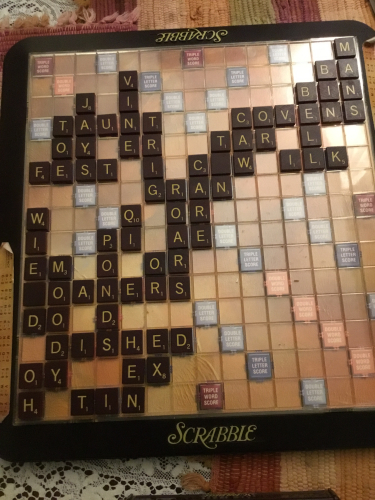 He did unload his ‘q,’ the louse, but he didn’t get much for it. He is putting down words of 10 and under (so am I) so as not to open the board. All letters are out. I must make him eat the ‘z.’ Should I make ‘kale’ & give him shot at the triple? NO! 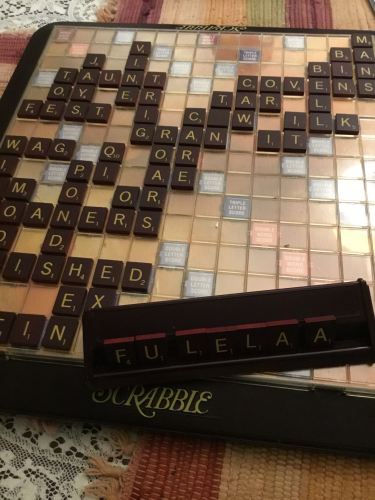 Whoa! He broke first! Put down ‘plug.’ But how can I go out with this mess of a hand? Four vowels and an ‘f’? Where’s the justice?! I can’t even reach the triple word. Is he setting himself up? I lead by a point! 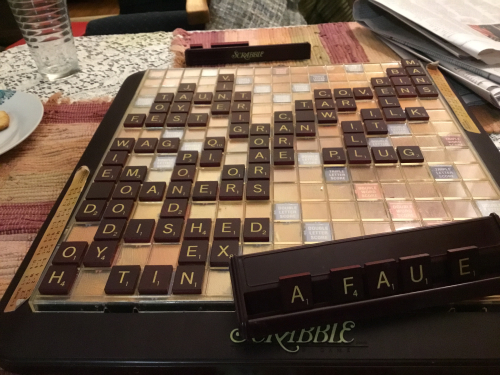 YES!!! I whomped my cheating brother by 15 points even WITHOUT counting the ‘z’ he had to eat! ‘Tom, calm down, it’s just a game!’ he says, as though I am not calm. When HE wins he calls out the Navy Marching Band AND the Hill Cumorah Tabernacle Choir to celebrate. 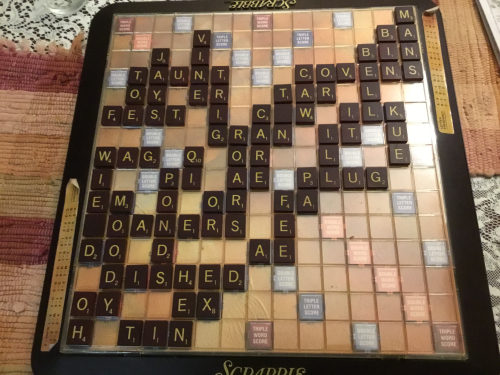 Come, now, Tom. It is a cute post and all, but ‘God Wrote the Universe, and the Game that he Plays is Scrabble? Really?

Well—the scripture does say that in the beginning was the Word. Moreover, the verse that must be there but I have not yet found it reads: “Have you beheld the great Scrabble game in heaven, o Job, and considered how nobody can put one over on Me?”