Home Archives Profile Subscribe
Can You Really Just Bring Up ‘Jesus’ Out of the Blue?
Anti-Cultists Jump on the JW Video Encouraging Brothers to Hold Steady During the Virus Time

I probably go off on too many tangents and even a few meanderings. Still, ‘Dear Mr. Putin - Jehovah’s Witnesses Write Russia’ is the best of its kind, if for no other reason than it is the only of its kind. There is no other complete record of JW events that have broken in Russia over the past few years. It is a labor of love on my part, released free in ebook version. Alas, there were quite a few typos and punctuation bloopers in the original but they were cleaned up long ago. I’m a one-man show here. Even many of my own people will think I ought not go into Part 2 as I do, for it puts the machinations on the table, if only to gut them.

I have made some revisions. The original consisted of Part 1, a collation of news reports regarding events leading up the ban, then the ban of the New World Translation, then the appeal, then the confiscation of property. Since the underlying reasons for opposing the Witnesses were not spelled out in court proceedings, I decided to spell them out myself in Part 2, along with how they ought be defended. (Not everyone knows that the word ‘defense’ derives from the Greek word ‘apologia,’ today more readily identified with ‘apology’ as though to say, ‘I’m sorry.’ Apologia means not that at all.)  Part 3 is more of what we would call a ‘witness.’ To the extent possible for a Westerner, all topics are considered in a Russian context.

There is now a Part 4, which covers significant developments of the last two years—updates. Some are almost comical, such as when Russian ‘experts’ declared Ps 37:29 (“The righteous will inherit the land”) ‘extremist’—extremist in any Bible (JWs had taken to using others when the NWT was banned), since it promotes the ‘doctrine of superiority based upon religious belief.’ I spun it that they are sticking up for the unrighteous in that land. Other updates are decidedly not comical—such as how ones arrested are invariably arrested by SWAT teams; if a group is “extremist,” you can hardly detain them as though a cop writing a speeding ticket, for that cheapens the word. And how—no way are we talking persecution like in Roman times, still, there are reports of torture, beatings, and personal belongings are invariably confiscated even when no arrests result.

I have also dropped the chapter on child sexual abuse that was in Part 2. It never belonged there. Allegations of this sordid topic never arose in any Russian context.

If it never belonged, why was it there in the first place? It is because when I wrote that book on opposition to Jehovah’s Witnesses in the East I did not then envision that I would be writing one on opposition to them in the West, and so when it came to apologia, I threw in everything but the kitchen sink. That latter book, ‘TrueTom vs the Apostates!’ deals with the topic extensively, for it certainly does fit in Western context. The only mention I make of the subject in Dear Mr. Putin is a few paragraphs at the end of Chapter 18:

It makes this writer think of the uproar raised over child sexual abuse within Jehovah’s Witnesses today. It is a controversy that played no part in Russia’s efforts to ban the Witness organization—the topic never came up—but it is huge in the West. Jehovah’s Witnesses are comparatively successful at preventing it—nobody, but nobody, has gathered every single member on earth (at their 2017 Regional Conventions) to consider detailed scenarios in which child sexual abuse might take place so that parents, obviously the first line of defense, can remain vigilant. But the world has little success at preventing child sexual abuse, so it focuses on punishing it after the fact, securing the barn door after the cows have fled. Routinely, we read of individuals arrested over pedophilia-related allegations. Unless the arrest is of a member of the clergy, the one detail that never accompanies such reports is that of the individual’s religious affiliation or lack thereof. Yet with Jehovah’s Witnesses, that detail is never lacking. Why?

The reason is that the Witness organization attempted to do something about child sexual abuse—they did not just close their eyes to it—and now detractors are trying to spin it as though they love the stuff. Jehovah’s Witnesses are well-known as a religion that “polices its own.” It is an attribute once viewed favorably, but now in the eyes of critics it is spun as intolerable “control.” In the course of such self-policing those taking the lead in the Witness organization came to know of individuals accused of child sexual abuse, and their “crime,” if it be one, is in leaving it up to affected ones themselves to report rather than “going beyond the law” to do it themselves. Time will tell how vile that sin is found to be, but it plainly falls far short of actually committing the abuse themselves, which is the pattern elsewhere, there being no mechanism for discovery elsewhere.

As with Jesus’ remarks in the sixth chapter of John that can, in the scheming of dishonest ones, be spun into encouragement of cannibalism, so the Witness policy on child sexual abuse is spun by similarly dishonest ones to indicate that the organization is determined to nurture and protect it, whereas nothing could be further from the truth. Three times before the Australian Royal Commission, Geoffrey Jackson of the Witness’s Governing Body pleaded for universal, mandatory reporting laws, with no exceptions—if that could only be done, it would make the job of the Witness organization in policing its own without raising the ire of those outside the congregation “so much easier.”

Continuing his cross-examination, Justice Angus Stewart said: “Leaving aside the question of overriding mandatory law from the civil authorities...” I almost wish that Brother Jackson would have interjected at this point, “I wish you would not leave it aside, for it would solve the problem.” The greater world cannot make a dent in preventing childhood sexual abuse, and so it puts the onus on those who are trying to do something about it. Alas, our best lines invariably occur to us too late—had Brother Jackson picked up my line, it probably just would have got their backs up—and then (gulp) he would have looked at me with displeasure.

It’s not everything. But it is exhaustive enough for this book.

There is otherwise only a single mention of the topic that never came up in Russia. Afterwards, the Russian embassy had apparently been reading Western headlines. It occasioned the following paragraph:

Russia has been lately dealing with an avalanche of accusations—from meddling in Western democratic process, to invading foreign states, to cheating in the Olympics. It is a non-stop hate campaign of absurd charges, fumes Robert Bridge, the RT.com correspondent. He warns that the bear may only take it for so long before it responds with a bite, not just a growl.7 I know it when I see it—non-stop hate and absurd charges. We experience it ourselves. If only the kings could get along Jehovah’s Witnesses might not get caught in the cross-fire between them. Actually, that was my response from the sole pedophile Russian mention, that tweet from the Embassy relaying a defamatory headline. I replied: “One would think that a country that roundly condemns slander directed against it would not so immediately swallow it when it is directed at someone else.”

Download it quick. Now is not too soon. The price is right. Remember: in thesedays of self-quarantine, experts who truly know anything, expect there to be a run on materials to read. 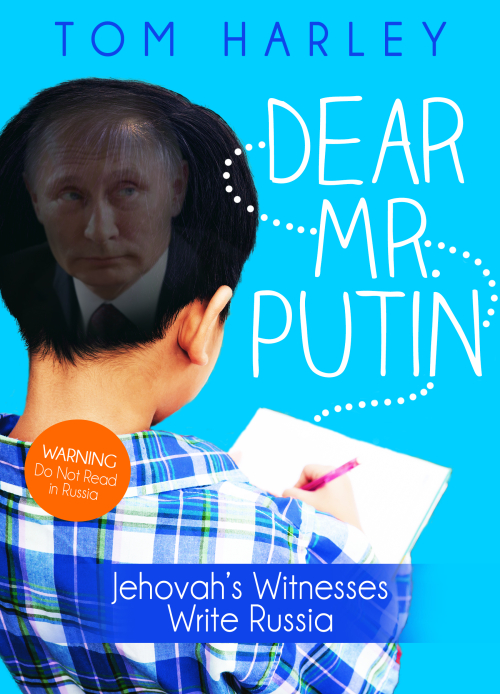