Home Archives Profile Subscribe
‘Using’ the Pandemic to ‘Recruit’ - Sheesh! What is it With These Nutcases?
A Judgment Message—What’s With That?

On the Southern Tip of Canadice Lake

It was a bright day yesterday, and many were out—out because it was Saturday and out because it was uncharacteristically sunny. Man, what a cold and wet spring it has been! At the foot of Canadice Lake (I had never been there) we met and chatted up a couple of birdwatchers—‘I photograph and he carries my gear,’ Sue told us. 13WHAM has posted some of her photos. There were plenty of birds to photograph that day, flitting all around us as we talked.

Canadice Lake is the smallest of the Finger Lakes and it is a little off the beaten track, unlike the others. The two birdwatchers were both wearing masks, as was my wife, and I said how I half-felt like a a bad boy for not doing so, but it is the great outdoors, after all. Last week they had not worn masks they said, but the course had earned them some dirty looks. It seemed a little silly, Tim said, since people naturally socially distance where there is room to do so, as we were doing at that very moment. 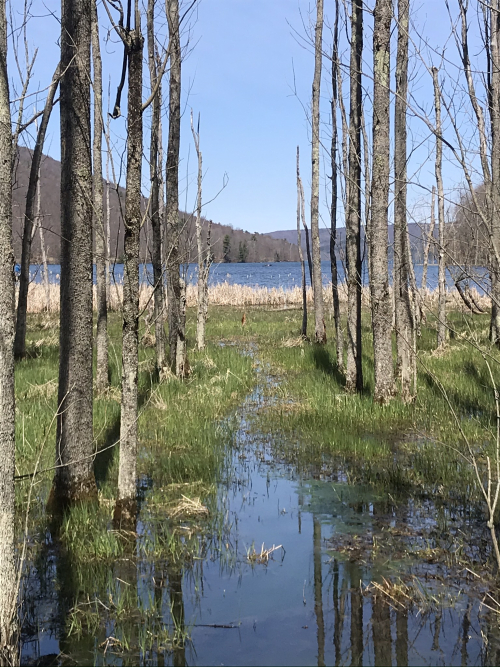 They allowed that, as a retired couple, their new routine wasn’t that much different than their old one—something I have heard from other retired people—but that they could feel for younger ones, especially those raising families. “How are you holding up anxiety-wise?” I had asked a young woman on the trail the day prior, after a bit of chit-chat, and she responded that she was feeling a fair measure of it. I mentioned to both the jw.org post on coping with isolation and loneliness, the way I try always to do because it is just the ticket today, and if not me, my wife does. Sue entered it into her phone.

Their military son and family had been grumbling about Bill Gates’ proposal to microchip people to indicate if they had COVID antibodies or no—they brought it up, not me—and the son declared that he would refuse to do so. ‘Slippery slope’ is the phrase he used. Sometimes people in think tanks lose touch with the everyday concerns of real people. However, Sue said she wouldn’t make an issue of it—she was getting on in years, her sun waning, not rising as with the young people—but what a world they were facing!

Their granddaughter, whom they suspected might be driven too hard in pursuit of good grades, was enjoying the respite. Sue said she initially missed school a little bit, but soon adjusted. “They homeschool?” I asked, but only later did my wife point out that it is not much of a probing question anymore, since everyone does. Still, they knew the expression ‘unschooling,’ which only homeschoolers can be counted upon to know—the term refers to letting the child’s own interest dictate just what they learn and in what order. Assuming there is parental guidance and that the media that would otherwise devour all their time is kept under restraint, there is a place for it. Curriculum need not be jettisoned entirely, but to keep it as structured as it is in school—well, why leave school if you are going to do that? A news article told of how parents were pulling out their hair, feeling like failures themselves and stressing out their children, trying to keep them on schedule with public schooling that has gone online—utilizing apps that were never meant to be all-encompassing, but only supplemental. I made a mental note to ask parents in the congregation about that—you don’t put extra stress on family members—these are extraordinary times.

‘Letchworth angel’ had been one of Sue’s pictures submitted online—I named it that, not she, for the purpose of googling it later. An angel can be seen in the photo of the falls, she told us. However, many were the nasty comments interspersed with the nice ones when she posted it, and so 13WHAM told everyone to behave—disagree without being disagreeable if you can.

Walking back to the cars, she asked just what was our faith. When we said Jehovah’s Witnesses, she stated how mean people are to them. But I said that it was not generally so—it depended on the circumstances of the moment—after all, we come without appointment, something virtually unheard of today—people are usually doing things. I usually thank gracious people on that account—they clearly aren’t obligated to give us any time at all, and yet some do.

As it turned out, both of us had an offspring that had departed from the faith, at some personal cost, though also with their own reasons, of course—and that circumstance drew us to each other, facilitated conversation, made each seem more human to the other. You don’t hide stuff like that—you bring it out in the open. People are people and go every which way.

Next day at the congregation Zoom meeting was read a letter from HQ. Some states were starting to open up from quarantine, largely for economic reasons, and it was for each family head to decide its own response. Each head knew his family’s own circumstances and what was advisable and safe for one family might not be for another. All Kingdom Halls would remain closed, however, as well as all forms of public preaching.

Searching ‘Letchworth angel’ did not turn up any pics as I thought it might, even after I appended ‘13WHAM.’ To be sure, I didn’t devote a lot of time to it. I did otherwise elicit a few photos of the falls at that State park—there are three of them and they are spectacular—but I could not discern angels in any of them. To each his own, however, and probably Sue’s picture evaded me.