Home Archives Profile Subscribe
This Has to Be One of the Stupidest Charts I Have Ever Seen — On Evil and Suffering
“Mr Fiend Wins Fine Language Contest!”

The Riot Squad is Restless, They Need Somewhere to Go—Witnessing When You Can’t

At a Zoom meeting for field service I admitted that I probably wasn’t going in service at all and, that being the case, I felt a little silly attending, but I did so anyway because that is what Jehovah’s Witnesses do. Every so often certain squirrelly things come up that everyone knows about, but they hesitate to state the obvious. With a squirrelly reputation is already firmly in place, I thought I’d have a go at it. It’s a little tricky to say because it you don’t want to down anyone’s ministry. Fortunately for me, I struck a chord. Others were where I was.

Now, letter-writing is fine—phone calls, too, I guess. Long ago I started a Bible study through a telephone call to someone in that apartment complex we couldn’t get into. I’m okay with both of them. But neither was ever intended to be the main ministry. Both were good for shut-ins—not for the prime ministry of able-bodied ones who might dabble in them but not jump in whole hog.

A pioneer sister said elsewhere—as soon as I heard her say it, I said ‘This is my kind of sister!’ that maybe it makes her a bad pioneer, but she’s not about to go into letters and phone calls 70 hours. I liked her almost as much as I did the candid sister trying to get people to go out with her in service after the Sunday meeting said to me: ‘It’s like pulling teeth!’ and I had to laugh, not only because it is, but also because only one person in 200 would have said it—my wife and I usually go out on Sunday but were not able to that particular day.

Sunday after the meeting is not a well-supported time in our area—too bad, really, because the organization used to try to pump up the day for the longest time by recalling how Supreme Court cases were fought to assure us that right, but times have changed. The congregation, by and large, chooses other days for the ministry. It is what it is, and the organization gave up—or at least it is not stressed as before, though when the CO was here he made a big deal of it and over 50 were out then, but the next week it was two—some Sundays it is nobody. Now that we are on COVID Zoom time, there is yet a local call for Sunday service but there is hardly any point to it anymore. The day used to be unique because you could find people home—now you can find them home any old time—and it doesn’t matter because we don’t go to their homes anyhow.

Her husband told her not to worry about it—that sister who wasn’t doing 70 hours of letters. That’s what the organization has said, too. Still, you never know when some local firebrand of a brother is going to lean on everyone else to ‘get with the new program.’ I see the calamity coming along and try to conceal myself. I’m not doing phone calls—oh, I may do a few here and there, even a few letters—but these days it is the friends to focus on. People don’t answer their phone anyways unless they recognize the number. At least I don’t—if you do, scammers will eat you alive. As for letters—look, they’re okay, but would I pay 55 cents per door to visit each householder in person? I would not. I want door-to-door and cart witnessing, and I can’t do them! Even were the green light given to resume the tried and true methods, householders would take offense, as though you had just stopped by to infect them so as to bump them off.

Bob Dylan sung: “The riot squad is restless, they need somewhere to go.” He could just as well have been singing it about Jehovah’s Witnesses. We need somewhere to go! Letter-writing and phone calls should become my bread and butter? Look, if someone wants to do that—and some do—I have no problem with it—go for it, especially for shut-ins who already were. I just don’t want it to become one of those things where if you don’t do it you’re deemed not very spiritual. I don’t think that will happen, but you never know. It’s hard to give it the personal touch. You can witness by text as well, and there are some possibilities there, but it still falls far short of the personal touch that I have grown to love.

My form of witnessing has come into its own, yet I can only say it gingerly, lest some jump in to warn me about the ‘dangers of the internet.’ Man, I wish we weren’t so timid about it. Say that you enjoy witnessing on social media and it is sort of like saying that you enjoy farting at the Hall. Nobody has ever said that you can’t do it. But ‘social media’ is never ever included in those articles about the many paths open to witnessing. Couple that with frequent caution about the internet being where the liars hang out—well, I just zip my mouth.

It can be done but you can’t be clumsy. You can’t do it directly. There is nothing that corresponds to ringing someone’s doorbell. There is nothing that corresponds to cart work. Sometimes brothers think that they can throw witnessing tweets just out there in the mix for passerby to pick up on, but if they follow counsel to friend only those they personally know, or at least those who seem just like those they know, they end up preaching to the choir. Then one of those who ‘seems like those they know’ turns out to be not what he seems and presents raring for a fight.

The analogy that best fits is where you move into a community—you buy or rent a residence. When you do such a move, you do not do so in order to witness to the neighbors—you do it because you need a place to live. Once you have settled in, however, you interact to a reasonable degree with the general community and in doing so, opportunities for informal witnessing arise.

All is not lost for traditional people-to-people witnessing. Walking the dog the way I do, I ran across a retired couple heading in the opposite direction.  Engaged in a little chit-chat, and presently asked how were they holding up anxiety-wise, crazy world and all. As it turned out, they were holding up just fine, but they still heard me out when I said “Everyone has a cause and so do I. Lately I’ve been calling attention to a website with a lead post on how to cope with isolation—a big concern for many.” The man allowed that mental health was a huge deal, and I added how with some it was not too good to begin with, and now this. ‘Jw.org,’ I said, if you should ever want to check it out—just two letters, easy to remember.

I didn’t even hand him a card, which might have had cooties on it. 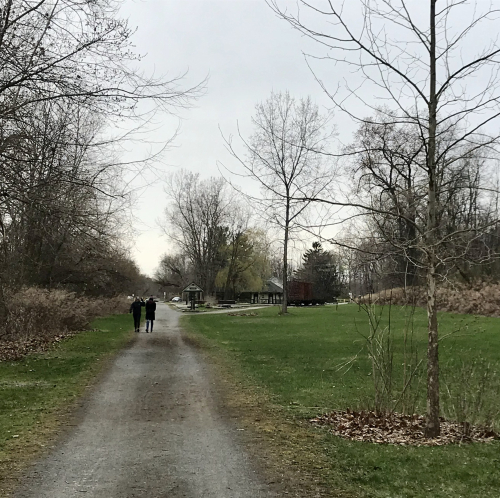 Heres something I really dislike. I’ve been going in the ministry for 30 years. I think I get the point,,,, more for our benefit than the public. Could benefit those who chose to listen, but gives bro’s and sis something to do,,, spiritual suit of armour and all that jazz. I just don’t like the idea of counting the time for it. I mean really? What other aspect of our worship do we count, record and submit time for. The older I get, the more I don’t like time counting. I know the org comes out with the reasons for counting,,, reasons always seemed pretty weak to me personally. It leads to a strange way of thinking among many. #ceasethecount???

[Tom: If we stopped counting time, it wouldn’t bother me at all. Yes, the time IS people, but it does lead to some artificial situations that wouldn’t occur otherwise. As some of my ministry is online, I have no idea how to count it time wise. I just make up a number, always a low one, and leave it at that.]

The bible actually discourages the counting of time. (Philippians 3:22).

Also,,, what do you mean by “the time IS people” and what artificial situation do you mean? Just curious :)

[Tom: You can’t speak with people without it taking time. In that sense time is people. The artificial situations that can arise are the reason that you and I are unenthused about counting time in the first place. It is something that has been around for so long that I half think it endures simply through force of habit. Times change. I don’t think it is the pulse to keep track of things that it once was.]

Hi, I don't want this to "appear" -just want to comment on Shysters one. Somehow- I suspect , courtesy of someone from topix, GLP, etc-
I only get publications index references on jw.org online library from the 1930s-50s. If I click on scriptures or something within the results, only then do I get what looks more like 'the full list' in the marginal notes, etc.
But about Jacob's 'method' to get the spots and stripes or whatever, a 1950s article said what he did was according to contemporary-then superstition, but the results were because the "strong" ones had hybrid vigor and when segregated and mating only with other strong ones they produced offspring more likely to have the stripes, etc that strong parents were more likely to have latent in their genetics.
I hope that makes sense and also hope that's what it really said, b/c going from memory.
I thought Jacob was "sucking-up" too , in a manner almost cringey that I was not enjoying to read about. After some coffee [though it messes w/ my homeopathics] and during zoom, I began to think it was really touching that they both were- genuinely, i thought- moved to tears. Jacob had "wanted to see Esau's face", and when he did, said it was like seeing God's face [which he would Know, right ? -having just "seen God face to face" in previous chapter ? and then 'striving, persevering, or contending' with 'the angel of God', until he got 'a blessing', and name -change, to commemorate (?)] "Shyster" does kind of say it, in a way, doesn't it ? I'm giving up trying to "say it"-whatever it is I'm trying to say -that is- for now. thx.

[Tom replies: anyone who mentions homeopathy gets an automatic upvote in my book. I do like the idea of ‘calling a spade a spade’ We sanitize the old verses too much. Call it as you see it and don’t worry if you are wrong—you never set yourself up as the Great Teacher to begin with.]

Hi TrueTom, sorry to bother you again so soon, but "Admin", WNM posted he has corona and i honestly don't know any other way of contacting him/her(?)

-A. also posted that covid is mentioned more and more to be associated with abnormal blood clotting, so Arnica might help, huh ?

-And whatever Arauna said helped her in that [v. alarming, at first] thread.
I remember one thing she said was a nebulizer with Hydrogen peroxide, and I think there was one more thing she said had helped ?-