Home Archives Profile Subscribe
Zoom and Jehovah’s Witnesses
The Riot Squad is Restless, They Need Somewhere to Go—Witnessing When You Can’t

Take a good look at this chart, for it is a serious attempt to prove God doesn’t exist. If he did, the thinking goes, he would have patched up evil long ago. 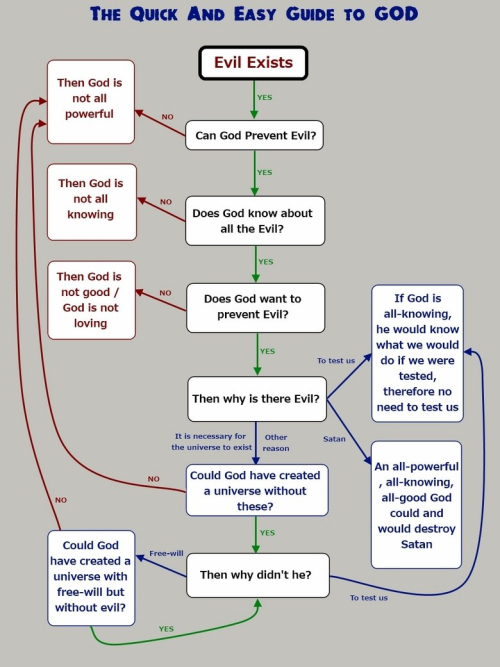 Note how the chart assumes God is like a Santa Claus who must shower presents regardless of naughty or nice. Note how the bottom-left two boxes present the point, “Can God make a world in which there is free will and yet ensure that no one will use their free will to the detriment of others?” Note how whoever wrote this chart thinks he is smart for positing a question akin to: “Can God make a mountain he cannot move?” He (she) thinks he has scored a ‘gotcha.’

There are a few other turds masquerading as diamonds in the chart  Each of them is a result of the chartist’s rigid presumption of what God must be like. How many can you find?

Completely absent from the chart is any conception that evil might be temporarily permitted to achieve a certain higher and lasting aim. It is a chart presented from the standpoint of a child—who knows what he wants and does not care to know anything else.

Let your finger go down the flow chart until it reaches the box: “Then why is there evil?” Note the three choices supplied and the chartist’s rash assumption that he has covered all bases. They are:

1) If God is all knowing, he would know what we would do when tested, so there is no need to test us.

Note how this takes all the dignity out of being human. Some people cherish the opportunity to prove their loyalty to a cause greater than they. They will not be satisfied with a test tube result that predicts their loyalty, and so in that event, let the good times roll!

2) An all-powerful, all-knowing, all-loving God could and would destroy Satan.

Note the assumption that if he could and would do it, he can and must do it NOW. Again, it is the reasoning of a child who expects presents under the tree on Christmas Day, and not one minute later.

3) Could God have created a universe without these?

This choice leads to the dilemma already mentioned, akin to: ‘Can God make a mountain that he cannot move?’ Maybe these guys can feast on this as ‘wisdom,’ but it doesn’t quite cut it for me.

Does not all of this validate such verses as 1 Corinthians 1:19-20?

Where to go to find an explanation for why God would permit evil?

Here is one I wrote for Bible-believers: It is notable for being a true story—it actually happened—and it was a hoot while it was happening, let me tell you—even though it gave me a splitting headache.

Here is one I wrote for agnostics and atheists: This one was written because Moristotle gagged on the first. In it I seek to present the Bible’s creation account as a metaphor, its meaning to be discerned without regard to whether it really happened or not.

Here is one off JW.org, presented as a series of online lessons:

Note that all of them involve Adam and Eve. This will make it a non-starter for many people today. Do not let it be so with you. Treat it as though it were the cover of a jigsaw puzzle that you assemble for the pure satisfaction of assembling it. Only afterwards do you consider whether the scene actually exists or not.