Joseph Putting Down His Brothers—Tactfully

I read of how Joseph related his dream to his brothers that they would all bow down to him one day, and that they took offense to it. “It’s too bad that he didn’t say it more tactfully,” I thought.

Then I read the Research Guide. (From WT 8/1/2014): “Joseph tactfully said to his brothers: ‘Please listen to this dream that I had.’”

Oh. He did say it tactfully. I stand corrected—I guess.

Says Genesis 37:5-8: “Later Joseph had a dream and told it to his brothers, and they found further reason to hate him. He said to them: ‘Please listen to this dream that I had. There we were binding sheaves in the middle of the field when my sheaf got up and stood erect and your sheaves encircled and bowed down to my sheaf.’ His brothers said to him: ‘Are you really going to make yourself king over us and dominate us?’ So they found another reason to hate him, because of his dreams and what he said.”

Hmm. They sure got their backs up. Did Joseph really relate his dream tactfully?

I raise the question on account of a dream I had myself the other day. I related it to my wife:

“I had a dream in which I woke up a hungry man, and so I said to you, ‘Get out in that kitchen and rattle those pots and pans.’ You cooked all day and served me continually. In every case, I left the dirty dishes wherever I happened to be for you to collect, which you neglected to do because you were too preoccupied hand-scrubbing my laundry in the creek—hand-scrubbing because I had not yet repaired the washing machine that broke down last year. Afterwards I told you to go outside and mow the lawn while I watched golf on TV. After a little while, I became upset that you were making so much noise with that power machine and so I told you to switch to the push mower so I could better hear the game and the commentators.“

I related this dream to my wife, and I did it tactfully. Really, really tactfully—tactfully like no one ever saw. Even so, she dumped my breakfast over my head and poured the hot coffee down my pajama bottoms.

Okay, it is not a big deal, their throwing in the word ‘tactfully’—they’re trying to flesh out the account. I understand that. It doesn’t mean that I do not appreciate spiritual food. I do. I wolf it down by the basketful. After all, there are scribes who have tried to flesh out the Bible itself—adding a nifty new ending to Mark, for example, because the original seemed too abrupt. That’s where the cute little phrase came from to the effect that Christians will carry poisonous snakes in their book bags which will not kill them when they bite. It is also how a verse specifically stating the Trinity was inserted in scripture by a scribe perusing verses and getting madder and madder that his favorite doctrine is nowhere explicitly stated. So for the Watchtower to state—without evidence—that Joseph was tactful is not a big deal in the overall scheme of things. Their evidence is probably that he was a nice guy, so of course he would be tactful—even as a precocious child. Still, I wish they wouldn’t do it.

More likely, it seems to me, is that he stated it in sort of a tone-deaf way that a typical youngster might—oblivious to how it sounds. Maybe not—I mean, if he had the dream, he had the dream—but I think I would be a little more circumspect in telling my brothers about it who already hated my guts. Look, I wasn’t there, so I don’t really know, but our people probably have him obsessing over his dress and grooming all the time, too, whereas his Neanderthal brothers did well to remember to put their pants on.

They didn’t like the little twerp. I can readily picture this because I didn’t like my brother as a child—he was always tormenting me, which he says now was irresistible because I took everything so seriously. Look at the little snot taunting me from atop the slide. 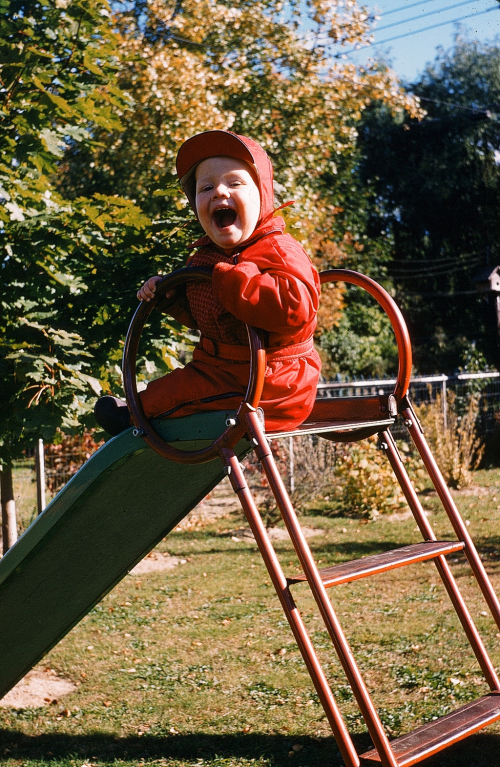 I never sold him into slavery like Joseph’s brothers did him, but I was tempted. And do you think he gave a hoot about my precious records? 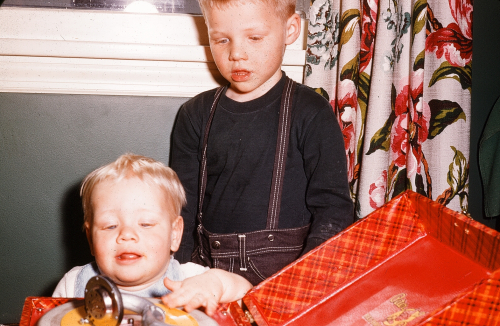 Even now he harasses me by continually cheating at Scrabble.

So I know how it is with Joseph and his brothers. The verses say it all:

“Now Israel loved Joseph more than all his other sons because he was the son of his old age, and he had a special robe made for him. When his brothers saw that their father loved him more than all his brothers, they began to hate him, and they could not speak peaceably to him.” (Genesis 37:4-5)

So Pop doted on the young kid and the brothers got jealous. Young Joe would get away with some prank and the older brothers would say, “Wow! If we had pulled such a stunt, Pop would have wailed our rear ends!” Got it. I know how that works. But when we are determined to sanitize verse, we don’t go remotely near such speculation, eschewing it for the speculation that Joseph told them “tactfully” how he was better than they, by means of a dream.

It is not at all just us—it is any Bible-believer who tries to bring to life the old characters. I wish they wouldn’t put in things that aren’t there. It is like when someone complained to me about Genesis 34, the chapter in which Dinah is raped. On and on our people go about it, as they should, because she was hanging out with the wrong crowd. But in retribution, her brothers slaughtered a whole tribe of people, after first conning them to get circumcised, then striking when they were yet hurting. “What with that?” the grumbler said—“Isn’t that what occupies almost the whole of Genesis 34? Isn’t that the 800 pound gorilla in the room?” But I set him straight by pointing out that while those men indeed were killed, it was done ‘tactfully’ and so he should quit his bellyaching.

There are a lot of not very nice things in the Bible. I like how one Watchtower publication put it (I wish I could put my finger on it again), that the Bible contains a record of human history—of times when humans followed God’s ways, of times when they didn’t, and of times when they were oblivious to them. It is the record of peoples who strove to serve God, of others who rebelled against Him, and of others still who never knew anything of him.

It is not at all like when the Meathead told Gloria of some horrific Bible account—maybe it was this one with Shechem—and Gloria said, “That’s terrible!”—whereupon Archie corrected her with, “It’s beautiful—it’s in the Bible.” No. Some things are terrible. Just because something is in the Bible, even as a deed of the ‘good guys,’ doesn’t mean that God is a cheerleader. I always keep these ancients at a certain arm’s length. Invariably they have a few skeletons in their closet.