On Reading, Higher Education, and the News.

There is a firm movement under the guise of ‘anti-cultism’ to make religion a decided subset of the state—with all its policies to be reviewable by the state. How strongly Rulf plays into this I cannot say, but I’ll bet it leans that way. You have probably hit the nail on the head.

“Could it be a matter of politics?” someone asked.

Yes. I think so. Someone asked Rush Limbaugh his reaction to the Boy Scout bankruptcy. In answer, he spoke to a radical leftist move to destroy anything standing for traditional family, using their own occasional failures to bring them down. I hadn’t thought of that before, I but think there is a common theme—that JWs are part of, but by no means the whole target of a movement that would remold anything of traditional family or God.

And, no—I don’t listen to Rush 24/7. Unless I am driving somewhere with the radio on, I don’t listen at all. But I did, 30 years ago, record the show and listen each night. I also, before that, listened to Larry King each night—and he is of the opposite politics. In his heyday he had the most interesting show of all. Each night he interviewed an author, each one of a different field of interest. One hour of his own Q & A, followed by 2 hours of call-in questions from the audience. He was so good. He would not let callers ramble on with long-winded speech-making questions—he forced the windbags to be succinct. He kept focus on the guest and made his own comments few. Unfortunately, his show got bought out by some network and they changed the format completely, putting him on only interviews with puff celebrities, and his newsworthy relevance fell off a cliff.

Before that I would zip through Books on Tape from the library during my mundane work, and only stopped when the library ran out of books other than the bestsellers of the day. “Stupid janitor forgot to leave an extra roll of toilet paper—I’m screwed,” someone tweeted. I tweeted back, “I read 50 of the BBC’s top 100 books of all time via Books on Tape, far more than anyone else on the thread, while working as a janitor. Sorry about the toilet paper.”

Larry King famously did not read the books beforehand of the authors he would interview. He said he did it that way so that he could approach each book with a layman’s curiosity and not his own pre-formed opinion. He was probably just being lazy, but that does not mean that what he said was not true—he could more easily approach topics with honest curiosity and without bias. I find myself doing something similar with books such as Rulf’s, which I may someday read but I am in no hurry. It is in my area of expertise—why should I drop everything to wolf it down? It is someone’s takeaway from their own experiences. I have my own experiences and my own reactions to things he responds to. Why should I assume his are better? Did he go to a fancy-pants school? So did I. I don’t make a big deal over it because it has never done me any good (my fault, not theirs) but if he starts slobbering over ‘higher education’—well, I know that world well.

None of us are Jesus, of course, but I like the response to his Sermon on the Mount of how people were astounded. “When Jesus finished these sayings, the effect was that the crowds were astounded at his way of teaching. for he was teaching as one having authority and not as their scribes”—the scribes that had nothing original to say but would just expound upon the opinions of each other. Jesus ignored it all to contribute his own (actually God’s) take on things.

Everybody has a few books in them and if they do not have the wherewithal to write them, that does not make their stories any the less valid or interesting. I may get around to Rulf, but he’ll have to wait his turn. My story is as good. As it is, there is a certain idiot here (he will not have read down this far because he cries foul at any sentence longer than a dozen words) who crows about all that Rulf has “proven” the moment he is aware of the book, without even reading it. I’ll know that I have arrived when I release a book and Billy gushes on about how I have knocked the ball out of the park without having read it. 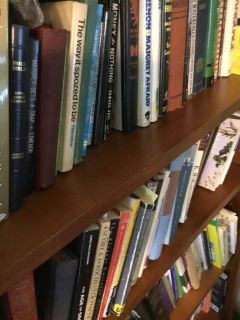