If you are a baby-boomer and you come across an article about Woodstock, you drop everything and you devour it. You swoon and sigh about the ‘summer of love.’ You lament that life somehow veered off that wonderful path—so full of promise. This is all very frustrating to me because I don’t think it is that way at all, but it is what it is. The tea kettle will boil dry and the metal turn white-hot while you are transported back to the day.

The water was long-gone, but my tea kettle had only reached red-hot when I came across a remarkable fact about Woodstock, from an article in the New York Post. It was held in the midst of a pandemic!—during the in-between lull, the type we are said to be in now with COVID19. The first wave had died down, and the second was yet to come. Before it was all over, H3N2, the ‘Hong Kong flu’ would take 100,000 lives in the United States and from one to four million worldwide. Yet the Woodstock show went on. It is described by an attendee who spent 4 days covered with mud and dreamed most of all of taking a hot shower.

The article is entitled, “Why American life went on as normal during the killer pandemic of 1969.” The New York Times described that illness as “one of the worst in the nation’s history.” So it was not a nothing-burger. From the article:

“Both [COVID19 and H3N2] viruses spread quickly and cause upper respiratory symptoms including fever, cough and shortness of breath. They infect mostly adults over 65 or those with underlying medical conditions....During both pandemics, horror stories abounded — from the bodies stored in refrigerated trucks in New York last month to corpses stored in subway tunnels in Germany during the H3N2 outbreak. Those who had H3N2 and survived describe a health battle that sounds eerily similar to COVID. “The coughing and difficulty breathing were the worst but it was the lethargy that kept me in bed,” said one person who survived it.

A few schools shut down for lack of teachers, but otherwise—“It was like the pandemic hadn’t even happened if you look for it in history books,” [one person recalls]. “I am still shocked at how differently people addressed — or maybe even ignored it — in 1968 compared to 2020.” The virus rarely made front page news then, whereas all other news has been suspended today for coverage of COVID 19.

Now, what are we to make of this? Were we crazy then, or are we crazy now? Did we drive the economy over a cliff for nothing? Or should we have driven it over a cliff back then?

“Fact-checking” is in vogue today. USAToday did that and pronounced the story true:

“The Woodstock festival of 1969 did occur amid a global pandemic and no stay at home orders were enforced. However, (1) the concept of social distancing was not yet accepted practice among public health experts and (2) the 1968 flu pandemic was not as deadly as other diseases. (3) Lawmakers also did not face serious public pressure to slow the virus, as (4) the nation's attention was focussed elsewhere. We rate this claim TRUE because it is supported by our research.” [inserted numerals mine]

It is possible to surmise that human wisdom today has enforced a cure that is far worse than the disease. Item 2 remains to be seen—thus far, COVID has claimed about 300,000 lives, and H3N2 up to 4 million—but it is not over yet and measures taken have undoubtedly reduced the spread. Items 1 and 3 might  turn out to be ludicrous examples of ‘human wisdom’ gone awry, inept as it is unyielding, and item 4 might have been a good thing—a circumstance that ensured worldwide economic depression did not occur in 1969 but had to wait until our time. Remember, economic depression is a serious matter in the Western world, but it mows them down like grass in the developing world.

The COVID disease is bad, but is the cure worse? Either scenario fits in with the Jehovah’s Witness narrative, but the second fits even better. Is COVID the deadliest plague since the Spanish flu of 100 years ago? Well, that certainly fits in with Luke 21:10-11, doesn’t it?

“Then he said to them: ‘Nation will rise against nation, and kingdom against kingdom. There will be great earthquakes, and in one place after another food shortages and pestilences; and there will be fearful sights and from heaven great signs.’” Got it. The nations battle mightily and with all the tools of science, but even so they cannot halt the great woe. The scenario  ‘works’—in fits in with the end-time prophesy.

But the second scenario ‘works’ to a far greater degree: The nations guided by their human wisdom and veneration of ‘science’ might have taken a bad situation and made it twenty times worse, crashing down the facade of competent self-rule upon their heads. At least Sampson knew what he was doing—he wanted the grand house to crash upon him.

What is the play that we are watching today? What is the reason that God did not destroy the rebels of Eden? Every Witness of Jehovah knows it—He allowed them time to make good on their claim that independence from Him would turn out well. It is like the JW organization’s video of the snotty kid who insists he has a better way. The teacher hands him the chalk. The more spectacularly that kid fails, the more convincing the answer to his taunt. Thus it is that when Jehovah declares an end to the grand experiment of human self-rule, he need not indulge the next rebel who knows it all. “Distress will not rise up a second time,” the verse says.

As for Jehovah’s people, they are “those making use of the world [but] not using it to the full; for the scene of this world is changing.” They go light on what the world offers. They have simplified their lives. If some offerings are taken off the table, well—they can adapt because they never put their trust there to begin with. But those of the greater world are beside themselves as they see everything they have worked for and trusted in being stripped away. They are not “all in this together” because it affects some greatly and others hardly at all.

Much boils down to trust in leaders and there is little of it in the greater world. There is the expression ‘Never waste a crisis’ It is the suspicion that various parties are trying to bring in permanent societal changes under the guise of fighting a temporary woe that gets people riled. What amazes me is how people ‘are not open to any agreement,’ as the verse says, and the damage done by COVID may be done not so much by the virus itself but by the furor it unleashes as to how best deal with it. 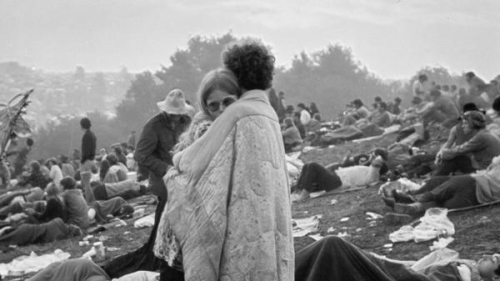 In my opinion, the measures that have been taken to “flatten the curve” are a display of human arrogance and hubris at its finest. Our apparent ability to “model” and “forecast” in any domain of life is extremely flawed. Humans fail to understand that life is an integrated system of extreme complexity. The illusion of security in this system of things is very costly to maintain. Oh well. Out with the old and in with the new.