A JW Connection With Perry Mason?

Look at how State Prosecutor Hamilton Berger (center) pouts like a little kid when Perry Mason outmaneuvers him, which he always does, because it is his show. Here Hamburger has raised an objection, Perry objected to it, and the judge overruled him. Flustered, isn’t he? 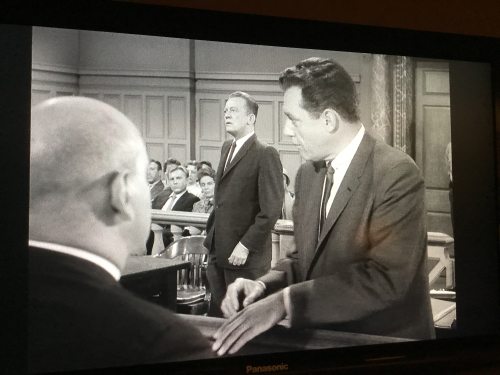 But after the case—he loses every single time—sometimes he will reconnoiter with Perry in the latter’s swank office as though old friends. He will even drop his prosecution mid-trial when Perry’s tightening net prods some poor cornered rat in the gallery to jump his feet—“I did it! I killed him! He had it coming! He cheated at Scrabble all the time!”

“Doesn’t Hamilton tire of getting his clock cleaned every episode?” someone asked William Talman, the actor who played him—he called his record “the longest losing streak in history.” Of course not! he answered. Justice was served—what more could a prosecuting attorney ask for? Overriding ambition with this guy? I think not.

Hamburger disappeared from the show in the 1960s because Talman was arrested for “lewd conduct” and smoking grass at a party. CBS suspended and then fired him, even after a judge threw out the charges! These days a tawdry reputation does nothing to hamper an actor’s career—it may even enhance it—but Perry Mason was from the days of squeaky clean TV. The show endured a series of dud replacements for Prosecuting Attorney before a deluge of letters made CBS hire him back.

Now look at how Hamilton’s right hand man, Lieutenant Tragg, beams with pleasure at the prospect of messing Perry up, here by arresting his client. He disapproves of the crime, I suppose, but it is compensated for by being able to stick it to Perry. He, too, loses every time. He, too, never holds a grudge. He, too, sometimes hashes out the details afterwards in Perry’s swank office. 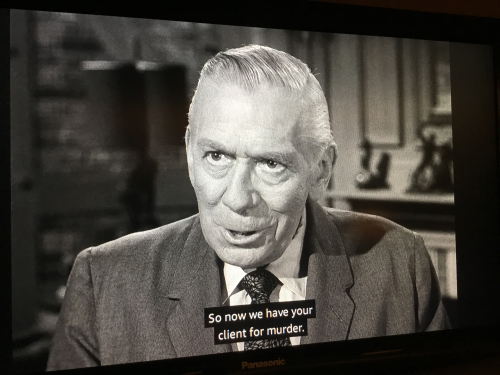 Ray Collins was the actor that played Tragg. He took on the role in his late 60s, and it would be his final role. With fading health and memory, he filmed his last Perry Mason in early 1964. Everyone knew he would not be returning, but the producer knew he watched the show every night and kept his name in the opening title sequence so as not to make him feel bad. That, too, like Talman getting fired, is not something that I think would happen today. Is this another bookends of a different age scenario—one bookend in seemly times and its mate in one unseemly?

My wife and I have rediscovered Perry during Covid 19 time, maybe even before. We like a good whodunnit, of course—who doesn’t? But the trouble with a whodunnit is that somebody has always dunnit, and these days they do with with blood splashing the screen. Murders in Perry Mason are kinder, gentler, friendly killings—they just drop without undue fuss. Half the time you don’t even see the killing—they’re already dead when Tragg or someone comes across them. It is another seemly-unseemly contrast.

Is it true that Jehovah’s Witnesses HQ gets a nickel each time you watch a Perry Mason episode? Maybe. Erle Stanley Gardner, the show’s creator, married his long time secretary after his first wife died. That secretary is supposedly the inspiration for Della Street, Perry’s super-capable TV secretary, who was always taking on extra missions to save the day. The real-life secretary was a Witness—just when she became one is hard to track down. She survived Erle and at age 88 was still administering his estate, which included a huge archive. When she died at 102, did she leave anything to her charity of choice? I’ve heard she did.

But it is hard to track down. Actually, I used to be able to, but an article that flat-out stated the connection has disappeared—is it behind a paywall? Dunno. It is for someone else to tease out if they are so inclined. I’m pretty sure it is so—I’m not usually wrong on these things except for when I am mistaken. At any rate, you can’t count your time watching the show, so don’t even ask.

Ray Collins died of emphysema at age 75. William Talman was 53 when he died of lung cancer in 1968. It was nothing to see any actor of the day lighting up a cigarette. Talman was the first Hollywood actor to film an antismoking public service announcement, not to be aired until after his death. He was by then pretty sure he would lose his battle with cancer. “Take some advice about smoking and losing from someone who’s been doing both for years... If you don’t smoke, don’t start. If you do smoke, quit!” I am reminded of how the JW organization in 1973, persuaded by the growing evidence that tobacco use was one of those 2 Corinthians 7:1 defilements of flesh, decreed it unacceptable for Witnesses who wished to remain in good standing. Just how many lives did they save in doing that?

Perry Mason the series ran eight years, from 1957 - 1965. I remember it, but I was too young to take much interest. My wife remembers that her mom never missed an episode. Netflix users as late as 2014 still rate Raymond Burr, who played Perry, as their favorite actor.

Roughly speaking, Matlock is the equivalent of Perry Mason. It is a legal drama of 20 years later with an equally engaging star—Andy Griffith. It is just as entertaining and the murders are also, if not friendly, at least not uber-grisly. So why do my wife and I watch Perry reruns and not Matlock? It’s because of the cars—memorable in Perry’s day, but toasters in Matlock’s. In last night’s exciting episode, Perry impales the escaping villain on the tail fin of his Cadillac. 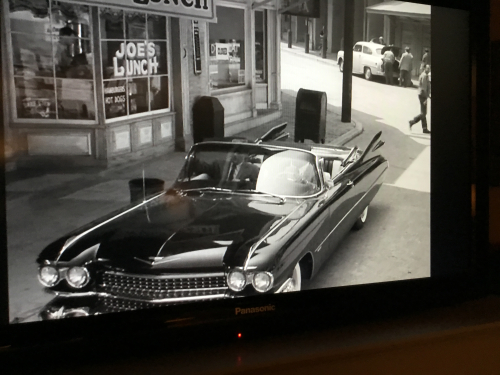 I love Perry Mason too.

It is coincidental that you post this story. Just a few days ago I was looking on YouTube for Perry Mason. I wanted to see the trailer for the rebooted Mason appearing on HBO and how they were going to approach it. Well one link led to another and I found some old screen tests. Burr didn't originally try out for Mason but for Hamilton Burger! Good thing he didn't get that role because if he did, Perry would never have won a case. Burr blows them all away. Erle Stanley Gardner was not impressed by Burr's looks – Burr didn't look anything like Mason as described in his books (it didn't help that Burr was overweight). But when he saw Burr's screen tests, he immediately said "That's Perry Mason!"
https://www.youtube.com/watch?v=jv22BnAMJUg

FYI Agnes Jean Gardner (nee Bethell)
https://www.findagrave.com/memorial/176513328/agnes-jean-gardner
This states that "She was a member of Jehovah's Witnesses."

[Tom replies: Okay, then. It’s the smoking gun. Thanks.]