Home Archives Profile Subscribe
Bart Erhman’s Heaven and Hell—Any JW Could Have Written This!
What if Atheists Had Learned Accurate Bible Teachings First? Would They Still Have Gone Atheist?

Whenever I am trying to distance us from the 24-hour days-of-creation people, which is not that infrequent because Jehovah’ Witnesses are frequently supposed a “fundamentalist” faith—which they are in some regards, but in others they could not be farther apart—we are not the slightest bit political, for instance, not do we buy into the heaven or hell outcome those dead—“socially conservative” is how Joel Engardio put it—I like to been to point out that “we are not the religionists that put dinosaurs on the Kentucky ark. That is someone else.”

(Sigh—we are the ones who put them in the Bible—not the Bible itself, of course, but a tiny drawing of a dinosaur used to be included in the inside cover NWT artwork. But that was in the green Bible, the one produced in 1961, and it disappeared ages ago. Few will recall it.)

I heard via social media report that the Kentucky ark was suffering a devastating decline in tickets sales due to Covid-19. I responded that this was a problem in the original ark, too—tickets sold out and the counter was shut down after just eight were purchased.

My wife and I once stayed at a Best Western in Cincinnati. It was a last minute change of destination because our original one was beset by hurricane. The next morning in the breakfast room, nearly everyone was headed out for a day at the Ark, 40 miles away, most of them with kids in tow. The thing is even shaped as the storybook ark, and not as essentially a floating box, which is surely what it was.

We did not go, of course, but saw some other sights of the city. Animal-wise, we went to the Cincinnati zoo, where there were no dinosaurs, but I learned that it was the zoo at which a boy fell into the gorilla enclosure, prompting the in-house sharpshooter to shoot the gorilla dead. This triggered much outrage, especially since Harambe had seemed to be nothing but protective of him, as though he was his (her?) own—but the zoo didn’t want to take any chances. They had a little memorial to Harambe there when we strolled by the gorilla enclosure. I am not sure why, but a top ten list for ‘best zoos in the country’ includes three from Ohio—Cincinnati, Columbus, and Toledo. There is something about that state and zoos.

It was just an extended weekend jaunt. The city is of manageable size, and as soon as we discovered that, we took the trolley that does a figure eight through the city—it’s not quite a figure eight because the middle doesn’t quite come together, but there are two loops, one in the north where the historic marketplace is—we left the car there after exploring it—and one in south, where the downtown is. At the bottom lower loop is the riverside area, where you can ride the Ferris wheel, hike the massive bridge into Kentucky, or attend a ball game—whether it be a Reds game (baseball) at the Great American Ballpark, or a Bengals game (football) at the Paul Brown Stadium—they are at opposite ends of the Snale Riverfront Park. The next day the Bengals played their opening game of the season, and if memory serves, they won—but maybe it does not and they lost. The pic on display is taken from the trolley at where the loops almost intersect—paintings on brick as though windows with people looking out. 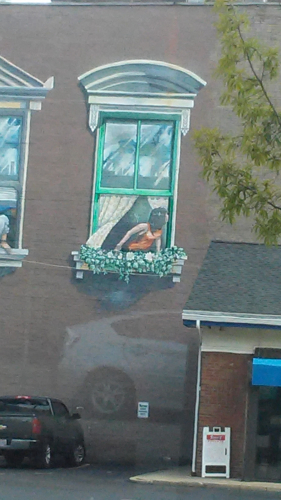 Some attractions were closed for renovation during our stay, but we visited an art museum, a science museum, and a luxury hotel (where we didn’t stay—it’s Best Western for us, as mentioned—I’ll bet nobody at the luxury hotel was visiting the Ark Encounter next day) that had to match its name to certain initials because the name originally chosen turned out to be copyrighted by someone else, yet all the embroidery and plate had been stamped with those initials.

And on the northern loop, driving this time, not taking the trolley, we spotted a small sign pointing to the William H. Taft home, so up the hill (where the family moved to escape the pollution of the old city—a pollution long since gone) we drove to spend a few hours at the childhood home of the 27th President, and for some stupid reason the pictures I posted there—pictures I took myself with my very own iPad, no longer display. If you see them there on the linked post, it means I have fixed the issue. If you don’t, I haven’t.

The proofreader in me just HAS to say that there should not be an apostrophe in "Sigh—we are the one’s who put one in the Bible". Please remove it at once.