Home Archives Profile Subscribe
Uniting the Four Fundamental Prophesies of Nature—Fulfilled with the Demise of Trump. (a Parody)
Filling Jerusalem With All Your Teaching

Just Who is Saved Come Armageddon?

Back in 1967, the year of the KM School for Elders held in Pittsburgh, were you to ask an elder “Will only JWs be saved at Armageddon?” he would most likely answer Yes, “but in a way that doesn’t make us look unreasonable.”

This is because Jehovah’s Witnesses are a “one true religion” faith. There are a lot of those around—not everyone maintains that “all roads lead to heaven”—and one firebrand of the Russian Orthodox Church—isn’t it Audrey Kuraev?—regrets that such a profession should be labeled extremist hate speech because there are factions in his Church that would like to say the same and now don’t dare. Extremist? If you say you are the one true Church and are wrong, just who is hurt? All that happens is you are left with egg on your face. And if you are right, you’ve provided a healthy heads-up.

It is dicey topic, Armageddon is. It’s hard to put a smiley face on it, even if it does come with the caveat that “distress will not rise up a second time.” You should hear Vic Vomodog rail about how it means those of his old religion gleefully contemplate the slaughter of billions of human beings! Well—now that you put it that way...

But if you are a Bible believer, what are you going to do? There it is in numerous texts, not just in Revelation, but in such places as 2 Thessalonians 1:6-9, about how “you who suffer tribulation will be given relief along with us at the revelation of the Lord Jesus from heaven with his powerful angels  in a flaming fire, as he brings vengeance on those who do not know God and those who do not obey the good news about our Lord Jesus.” It cannot be dismissed euphemistically as “tough love.”

Still, it is nowhere near as nasty as what churches have historically embraced down through the centuries—the doctrine of hellfire, which holds that for a few decades of wrongdoing a person will be punished forever! I’ll take a quick death at Armageddon any day over that gruesome fate. One knockout punch and you sleep forever.

Bart Ehrman, the Bible thumper who became the anti-Bible-thumper, but you can still see the Bible thumper in the anti-Bible thumper—comes from this “theology,” so that you can see why he might consider escaping it as having opened his eyes. If fact, in one of his lectures for the Great Courses (what were they thinking when they chose him?) he explains the really bizarre resurrection-of-the-dead notion that prevails among his former co-religionists—that the ungodly are raised so that God can rub their noses in the condemned course that they chose, after which they will be cast into hell forever and ever! How did it escape him (then or now) that “he who has died has been acquitted for their sin?” (Romans 6:7) God doesn’t do a “double jeopardy” on them. It is the course they choose upon their resurection that matters, not what they did in their prior life. Ronald Curzan of the JW organization explains it here:

As for Great Courses, they wouldn’t know a scripture if one bit them in the rear end. They just scan the roster of university professors, pick an esteemed one, and figure he must know what he is talking about. It is not their fault if it turns out that he doesn’t. Or rather, he does, but only according to the inadequate method of biblical examination he has chosen—that of historical scientific analysis. He is like a mechanic come to the job, his toolbox stuffed only with wrenches, when what is needed is a screwdriver. Rather than regret he doesn’t have the correct tools, he declares that if a wrench can’t fix it it is not a problem. To be sure, Great Courses somewhat redeems itself by selecting Luke Timothy Johnson for their series ‘The Story of the Bible,’ who examines it from a traditional approach and does not adopt the default position that it is human myth making.

The current answer to “Will only Jehovah’s Witnesses be saved?” is no longer ‘Yes—but to be explained so that it doesn’t make us look unreasonable.” It is “No,” followed by how to say such would be presumptuous, since only Jehovah can judge those who might be mentally disabled, children too young to make up their minds, etc. This is essentially the same answer, isn’t it, with caveats that can be greatly expanded. Last I heard, one out of everything three Americans are on some form of antidepressants or other psych medicine. Research has come to light that a child’s brain formation is incomplete even into their early 20’s. I remember how Ray Hartman the circuit overseer would come up on the platform with a stack of material to choose from, and toward the end of whatever talk he was giving he would comment on various items, seemingly choosing them as he went, and that this business of brain development into the 20’s was among them, or maybe he just told it to me in private, but it does come from him.

Well, the Witness organization can’t wiggle much, can it? What can it do but abide to the “one faith, one Lord, one baptism” of Ephesians 4:5? Don’t other faiths baptize? Yes, they do, but the ones who aren’t raising the ungodly dead just to say “Told ya so!” before tossing them into hellfire, Bart Ehrman’s former cohorts, are blasting infants with squirt guns these days on account of Covid-19. (as seen  on  India.com) 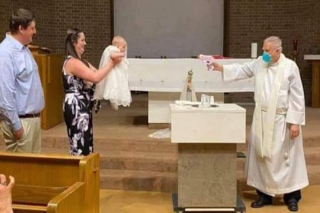 My daughter answers that question with: “Well—I’m not Jesus and I don’t know.” I suppose she picked up the spirit from me, but not the exact words. I recall saying in one talk: “Just how far removed can one be? A certain distance or not one millimeter?” adding that I did not know but I would operate myself according to the principle of James 4:17 that if one knew what was right and did not do it, it was a sin for him.

Probably a lot of brothers take solace that, as Jehovah spared Nineveh at the last minute with: “Wow—look how stupid there are! They don’t know their right from their left!” he will somehow cut many some slack in ways we can’t foresee. (Jonah 4:11) But the Watchtower can hardly say this, for that would be clearly speculative. What can they say other than “One faith, One Lord, One baptism?” So that is what they say, in the main.

I don’t lose sleep over it. It is enough for me to be occupied with holding up my end. I don’t concern myself with God holding up his. What happens happens—and of course, I will adjust to it. As Anthony Morris said when he was trying to sell a house—it was critically important for him to quickly have the cash for some reason I forget—and the deal came at virtually the last second, and he related how he would look up in prayer and say “Um—it’s getting a little tight here,” but then qualify his duress with “He’s God—He can do what he wants.”

“The spirit of the Sovereign Lord Jehovah is upon me, because Jehovah anointed me to declare good news to the meek. He sent me to bind up the brokenhearted, to proclaim liberty to the captives and the wide opening of the eyes to the prisoners, to proclaim the year of Jehovah’s goodwill and the day of vengeance of our God, to comfort all who mourn...”  (Isaiah 61:1-3)

I tell people I don't make the rules and wouldn't presume to judge them or their beliefs. My judgement isn't binding or worth any more than theirs. But I can point to what has been recorded in black and white, protected, and shared for centuries.

I always wondered if Elijah avoided PTSD after the incident "Elijah versus the Baal prophets at Carmel" (1 Kings 18:19-40) where the choice was stark and the consequences were final for 450 people.

He, and Daniel, Hananiah, Mishael, and Azariah will be interesting to interview.