Home Archives Profile Subscribe
Filling Jerusalem With All Your Teaching
1975–Could it Happen Again?

An Unlikely People for Persecution—Part 1

Any advanced alien civilization worth its salt, stumbling upon earth, will note its warlike past and present and as a consequence, will set its blasters to ‘pulverize.’ But they will pause upon discovering there is a group of people who categorically reject war participation—under any circumstances, for any reason. ‘Maybe there is hope,’ they will think. But further intelligence will reveal that group has been declared extremist and they will pull the trigger.

Any advanced alien civilization worth its salt, stumbling upon earth, will note its past and present racial hatred and as a consequence, will set its blasters to ‘pulverize.’ But they will pause upon discovering there is a group of people who have no problem in this regard—Pew Research said of Jehovah’s Witnesses “the denomination is one of the most racially and ethnically diverse of any religious group in the US. . . .32% are Hispanic, 27% are Black, and 36% are white.” ‘Maybe there is hope,’ they will think. But further intelligence will reveal that group has been declared extremist and they will pull the trigger. 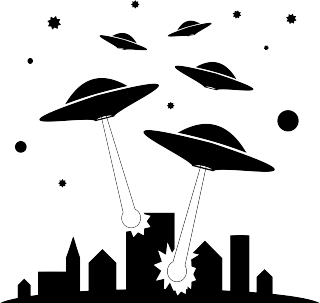 They are declared extremist in Russia, but considered extremist—or at least weird—by a ton of other nations despite their peace and racial harmony. These are people who do not retreat to some inward cult cave. Rather they go to people as they live, work, and school in the general community. One can appreciate Brother Glass, when criticized sharply over not voting, responding with: “Why should we? We have solved most of the problems that the world is yet grappling with. Why should I trade the superior for the inferior?”

BusinessInsider took up the fact that Jehovah’s Witnesses do not vote, and the article is—well, maybe not a hit piece, but imagine how it would be in its original form. “This article has been updated to include comment from the Jehovah's Witnesses US spokesman,” is the byline at end of page. Imagine how it would read without his comments:

“The Christian denomination instructs its followers not to take ‘any action to change governments,’ which includes voting, running for public office, serving in the military, and reciting the Pledge of Allegiance,” it says, not mentioning that it is really the Bible that instructs this; the Witnesses merely follow that Book, rather than issue arbitrary instructions. Happily, the spokesman, Robert Hendriks, adds meaningful context.

Without Hendriks, the article continues: “Witnesses believe they should only be loyal to and representatives of ‘God's kingdom’ and should take ‘no part of the world.’” “Only” is the key word here. Am I too sensitive in reading an implication by the writer that they are disloyal to present governments? They are “hostile to all kinds of patriotic exercises,” says Professor of Religion at Trinity College Mark Silk, and it takes Robert Hendriks to “insist that Jehovah’s Witnesses respect others' participation in government and the political process and ‘don’t pretend to believe that the world would be a better place without government,’ despite praying for God to ‘take over rulership’ eventually.” (italics mine)

BusinessInsider takes the ball again from Hendriks and instantly fumbles it. “He [Hendriks] also noted that the denomination condones participation in civil society, as long as it isn’t political,” the article follows up. What he probably said was that the Bible offers no reason to reject such participation and so neither does the denomination.

“If you were to imagine [Witnesses] could vote, there might be a kind of social conservatism combined with economic progressivism," says another quoted professor of religion, Mathew Schmalz. Am I wrong or too sensitive in reading between the lines: “Ah—what they could bring to the table if only they weren’t so backward in this regard?”

Nothing is flat-out wrong in what the professors say. But it’s a word here, a phrase there, that reveals their lack of feel for the subject, to say nothing of a lack of appreciation. “Schmalz said the social and political upheaval the US and the world are experiencing may confirm Witnesses’ belief that human institutions can’t solve human problems,” it goes on. Hendriks might have added “Duh!” to this remark but he doesn’t—he is not me—he is a spokeman who knows how to use winsome words, not wincing words.

Rather, Hendriks speaks to how politics divides people, not unites them, and unity is what Jehovah’s Witnesses are all about. “Politics today is so fractured, it’s breaking families up, it’s breaking marriages up ... that is something Christians should have nothing to do with,” he said. “Even in our hearts, we need to love our neighbor—and it’s much more difficult to love your neighbor when you’re rabidly in the corner of one political candidate that is diametrically opposed to their political candidate.”

For once, BusinessInsider gets it right as it adds: “Witnesses, who are pacifists, believe humans were not made to rule over one another and reject the divisiveness of politics.” They’re not and they do.

They’re doing the best they can over there at BusinessInsider. When the original article reads too much like a hit piece they reach out to Hendriks—or did he reach out to them?—at any rate, they include his comments because they are trying present an accurate picture on something they don’t know much about. If you wanted to flatter, you could almost compare them to the philosophers of Athens who put Paul front and center onstage with the request: “Can we get to know what this new teaching is that you are speaking about? For you are introducing some things that are strange to our ears, and we want to know what these things mean,” (Acts 17:19-20) only this time it is Hendriks, not Paul. Still, I’d hate to read their article without Hendriks’s clarifications, and without his clarifications is how it originally stood.

“But when it comes to spreading their own beliefs, Jehovah's Witnesses aren’t shy about lobbying governments,” the article continues, and imagine how that sounds absent Hendriks’s stabilizing input, as though leveling an accusation: “They take, but they do not give.”  “Next week, the denomination will launch its largest ever ‘campaign for God’s kingdom’ by sending tens of millions of magazines and emails to government officials and businesses all over the world.”

I’ve taken part in that work. Here is what I wrote to some fellow that runs a trucking company in my area:

I needn’t tell you that government is a hot topic today. Accordingly, during November the community of Jehovah’s Witnesses that I belong to is calling attention to God’s kingdom, focusing on those in the business community who are not always easy to reach.

Few persons think of God’s kingdom being a government arrangement, but the Bible presents it that way. It is what is prayed for in the ‘Lord’s prayer,’ as when it “comes,” God’s will is to be “done on earth as it is in heaven.”

Your copy of a magazine devoted to the topic is enclosed. Hopefully you will find a few minutes to look it over. Items can also be downloaded at jw.org.

You will find ideas presented quite simply, and feel free to contact me for details or with any questions.

This is the kingdom that includes health in its platform, as opposed to just that of health care.

Another thing BusinessInsider gets right—all on their own and without any input from Robert Hendriks is: “If Jehovah’s Witnesses did engage in politics, experts say their political allegiances would likely reflect a cross-section of American society given the group's large size, diversity, and even spread across the country.” In other words, it would be a wash. Leave them alone to do what they do best.

I really appreciate your clarifications with a sense of humor and a lot of "style". This is a welcoming contrast to all this lies and miss information about our great brotherhood. Some of your arguments helping me to make meeting-comments with some faith-strengthening background informations. Keep going on with your fine piece of work =) Greetings from Germany