It doesn’t take long to learn how to ride a Segway. The San Diego tour operator gave us about 15 minutes in the company parking lot. Lean forward, you go. Pull back, you stop. Turn right or left pretty much like you were riding a bike. 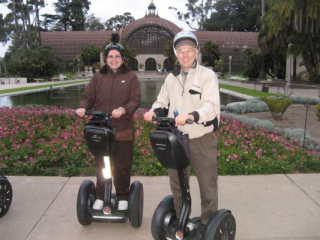 There’s barely any point in saying how easy it is because the product is no longer made. It was sold to a Chinese outfit in 2015, combined with some other products, and then discontinued in 2020. Murray joined us in San Diego and he told me the Postal Service—he retired as a mail carrier—might have bought a few hundred, maybe even thousands, but the Postmaster General fell off his. The owner of the company later had problems, too, running his Segway off a cliff to his death.

Well—we found it easy. After our brief training session, off we went in single file, reconvening here or there as our guide pointed out spots of interest. We spent much time in Balboa Park, where our guide snapped pictures of anyone who asked. We did, and handed our over camera to him. Balboa is an urban park originally constructed in order to host the 1915-16 Panama-California Exposition World’s Fair. Returning late afternoon, we had to thread our way through the homeless who were claiming their nightly sidewalk spots. This made me slightly nervous—we weren’t THAT experienced at driving these things, but there were no incidents.