The Power of a Joke—Soviet Times and Now

Russians under communism used to blow off steam with jokes—thousands of jokes against the regime, against the shortage of goods, against the secret police—says Vejas Gabriel Liulevicius, narrating his History of Eastern Europe course for the Great Courses teaching company.

“A man stops by the office of the secret police for help in locating his parrot. They chase him away—they have more important things to do—but as the man leaves he lays great stress on how if the parrot is found, they must not think that its political opinions are his.” 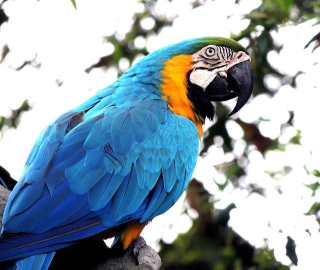 Decades later, Paul Goble keeps up with current jokes: “A man formally applies to the government for a position in the Inquisition. He is told he is either 1000 years too late or 3 years too early”—this is a joke that will resonate with Jehovah’s Witnesses who are officially classified as “extremist”—a designation shared only with ISIS.

Some of the old Russian jokes (the Russian term is ‘anekdoti’) are timeless:

“What’s the difference between capitalism and communism? Capitalism is man’s exploitation of man but communism is the exact opposite!”

The joke is versatile enough that it can be applied to any contrasting forms of government, much as Betty McClure was able to redeem a (possible) ethnic jokes simply by applying it to her circuit overseer husband:

“Dave comes from a town so backward that it’s greatest tragedy was the time the town library burned to the ground. Both books were destroyed! One wasn’t even colored in yet!”

Versatility is a good thing. Maybe the Russian joke itself from Ecclesiastes 8:9, the verse of how “man has dominated man to his harm.” It is attribute of human rule itself, and can be fit to any specific type, recalculating only the new winners and losers. All human governments drop the ball. Usually it is a bowling ball. As people contemplate the vulnerability of their right and left toes, thus is decided their politics.

Professor Liulevicius goes on to state: “Scholars are still debating whether such jokes undermined the whole system by mocking it or whether on the contrary they stabilized the system by allowing people to vent some of their frustrations without ever openly challenging the regime. There’s no consensus on this,” and then he goes on to explore “the power of a joke.”

I’d say the power of a joke is that of a double-edged sword. Almost like the Word itself, it “is alive and exerts power and is sharper than any two-edged sword and pierces even to the dividing of soul and spirit, and of joints from the marrow, and is able to discern thoughts.” (Hebrews 4:12)

A concluding chapter of Tom Irregardless and Me reads thus: “If we have poked some fun at Tom Irregardless, Oscar Oxgoad, and Tom Pearlsandswine, it is to establish the greater picture that God uses people like them to accomplish feats that their higher-ups, though they have far more education, can only dream of. There’s not much that God can do with independent people, and proud ones stop him dead in his tracks. With humble ones, conscious of their spiritual need, he can do a lot.”

How can you not write this in view of Jesus’ words that the high-brow do not get the sense of the scriptures because their own vanity gets in the way? “At that time Jesus said in response: ‘I publicly praise you, Father, Lord of heaven and earth, because you have hidden these things from the wise and intellectual ones and have revealed them to young children.” That’s who responds in the main to the Christian message: “young children.” If you present them as though Rhodes Scholars, people visit the Kingdom Hall and discover in no time at all that they’re not—so why not present them with all the foibles that young children have as well as all that is appealing?

Then, too, regarding the power of a joke, there is the Alfred P Doolittle factor: “They’re always throwing goodness at you, but with a little bit of luck a man can duck.” Humor lets you duck when you have to. Let’s face it—in any organized arrangement there will be things that don’t go your way. “Why on earth don’t they do it this way?” you’ll say, as they do it that way to thunderous applause—and use of judicious humor bails you out as a relief valve.

Of course, you can also use humor to savage things, and this I do, too—with the blade pointed the proper way, of course. Vic Vomodog—watch out! Once you laugh at something, will you ever look at it again in the same way? “I have never made but one prayer to God, a very short one,” wrote Voltaire. “Oh Lord, make my enemies ridiculous. And God granted it.”

For years, a man has been saving up in order to buy a new car. One day the party official summons him to say that his patience, hard work, and loyalty have been rewarded—he has worked his way up the list and he can now expect his car in but 10 years time. The man asks the party official if he knows on what day 10 years out his car will arrive, to which the official consults his records and tells him. The man then asks if it will come in the morning or afternoon, and at that the official frowns. “What kind of a question is that?” he demands.

“It’s just that I hope it arrives in the afternoon,” the man says, “because the plumber is coming that morning.”

See: I Don’t Know Why We Persecute Jehovah’s Witnesses—Searching for the Why

A parish preist taught his parrot a wide variety of anti communist slurs.
One day the preist sees a party official coming to his house. "If he hears the parrot talking, I'm done for; where to hide the parrot?". In the few remaining seconds before desaster strikes, the parrot gets stored awy to the refrigerator, the only sound proof hide away.