grumble grumble...The daily text for today (February 7) quoted Emily Baran’s book about withstanding persecution in Russia. It didn’t quote mine. The reason it didn’t quote mine is that mine is rubbish, but even so... Mine is of the more intense time period. Hers (Dissent on the Margins) covers Witnesses standing up to Russian oppressors from the mid-1900s to her book’s 2014 date of publication. Mine more or less picks up where hers leaves off. Her time period is no slouch, but mine is where the real action is.

Dear Mr. Putin - Jehovah’s Witnesses Write Russia may be rubbish but its rewrite will not be. I took it down, it was so bad, and I’m embarrassed I ever released it. The rewrite is not too far off now—even if when I say “two months” it actually means four at the very least. The same narrative is told in 2/3 the words, showcasing what survives to more powerful effect. Plus, it updates with the darker turn of current events. Let’s face it, even if the ebook was any good, the whimsical cover of a child writing Putin seems remote from the current “fight to the finish” tone of Mark Nourmair. It needs a new title and new cover. It will have both.

“Dam, dam, dam, dam! They’ve grown accustomed to my face,” to quote Rex Harrison. (The dam is spelled the friendly beaver way, for the sake of the friends. I would spell it otherwise were it not for them. But dam gets the job done. Everyone knows beavers are highly educated—graduates of Dam U, every one of them. The two forms can substitute for each other) The point is—how am I going to advance a new book as genius when I have firmly planted the notion that I originate rubbish? I’ll think of something. But someone should have told me the ebook needed work so as to make the present salvage unnecessary. That’s the trouble with the friends—they’re either too polite to tell you that your work stinks, or they have such a low bar of approval, happy to read anything complimentary, that they don’t think it does. 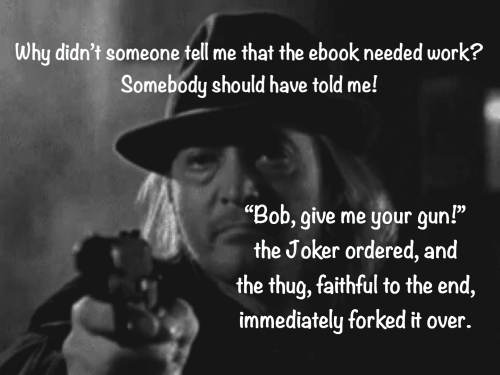 Never again will I write a book after the fashion of Dear Mr. Putin. You’re supposed to start with an outline, and then progressively write to fill it out. You’re not supposed to start with hundreds of individual conversations and then shake everything you have until it all falls into one of many categories, then call each category a chapter. What a hare-brained way to write a book! My other books aren’t this way. This book made for trouble for me by far than my other four put together!

Because of this basic structural flaw, it probably won’t be possible to redeem it 100%. But I can come pretty close. And I do have advantages. One is that I know my people inside and out. Another is that I am a pretty good storyteller. Most of what “witnessing” I do will be in the form of storytelling—just relating my conversations and experiences in field service to illustrate this point or that. Another advantage is that there is NO competition. Even in it flawed form, it is the only comprehensive record of Witness trials and integrity in the face of the Russian bear. Then too, the ebook version (maybe not Amazon—is it even possible with them?) remains free, a labor of love. Alas, I wish I had charged $300 for Dear Mr. Putin so no one would have bought it.

On the weakness side, I can’t approach Emily Baran for scholarship. I have a disclaimer on that in Dear Mr. P, and it will probably survive into the new book. Nor did I actually travel to Russia (I wouldn’t dare now) to interview people, as she has. Nor do I have any blessing from Russia Bethel, as I think she did—it does seem they rendered her some assistance. On the other hand, I have Chivchalov, who says anything he puts out can be made use of and who answers my various questions, and I have very complete updates from several human rights and academic sources.

Why don’t I just wait for the organization to put out a complete record? They probably will one of these days, just as the 2008 Yearbook featured a history of Jehovah’s people in that land up till that date. I guess I write for the same reason Baran did. Anything the brothers come out with will be spiritually on the money, but secularly maybe not so much. It will be “one world leader said,” “one human rights organization reported,” “one academic professor agreed,” without much sense of the interplay between them.

Alas, I also don’t have the support system Baran had. Baran’s is published on the academic press. Mine will be self-published. There are hoops of quality control that must be leapt for the commercial press, some are imposed upon you whether you like it or not, and it is all too easy to not leap them for self-publishing.

I am here in the world of the friends, half of whom will think, “Oh, you’re writing of the brothers? That makes it spiritual food. Is it your place to do that?” and the majority aren’t too bookish to begin with. If I start spreading the word that I’m looking for collaboration, someone will surely come along to suspect that I am pushing ahead or trying to make a name for myself. It is as I write in Dear Mr Putin:

“Books about Jehovah’s Witnesses authored by Jehovah’s Witnesses are not plentiful. This is a shame, for no outsider, even with the best of intentions, can do justice to the faith as can a Witness—they miss the nuances, and in some cases, even the facts. Three reasons account for this drought. Jehovah’s Witnesses are primarily drawn from the ranks of working people, who are not inclined to write books. Pathways of publicizing their faith are already well established and few think to go beyond them—why write a book when you can and do look people in the eye and tell them what you have to say? There is also a sense of not wanting to compete with an official channel.”

Ah well, it is what it is. I don’t want to be one of the whiners, always blaming my problems on someone else. I could work to overcome these deficiencies if I put my back into it. The fact is, even without Covid, I am a bit of a loner who doesn’t excel at networking. With Covid, I have unchained my inner hermit, and he is doing just fine, but it doesn’t make for an especially good support system. Nor am I envious of Baran, much less in competition with her. I swapped emails with her a few times. She’s very nice. She probably rolled her eyes at Dear Mr. Putin. She dropped out of sight for a time so as to be a mom, but now I see she has contributed anew in the press.

Oh—and her quote from the daily text? “Commenting on Jehovah’s Witnesses in the former Soviet Union, historian Emily B. Baran said: ‘When the state told believers that they could not evangelize their faith to others, Witnesses chatted [with] their neighbors, coworkers, and friends. When these actions landed them in labor camps, Witnesses sought out converts among their fellow prisoners.’ Despite the ban, our brothers there did not stop preaching. May you have that same determination!”

Notice how she is an “historian” and I’m not? And yet, the description is plainly correct. It reminds me of Ray, a former brother who would go around telling people he was an historian. “How do you know that?” a householder would say and he would reply it was because he was an historian. Finally I told him to knock it off. He was a history buff, not an historian. An historian is when others recognize your expertise, not just you yourself.

I acknowledge Baran’s work in an early passage that will also survive the cut into the rewrite: “I will draw upon her book heavily for background. This particular chapter could not be written without it, and other chapters are spared many obtuse statements because of it.” I also discussed how she took vigorous exception to one reviewer’s charge (just one, out of many favorable reviews) that hers was a hagiography, heightened to “gagiography,” which is not a word. I suspected it was someone expressing personal distaste of the subject, as though it made him gag. She was inclined to think it was just a typo. Either way she was steamed about it, since it alleges lack of objectivity, the worst of all possible sins for an historian.

She is not among those who “miss the nuances, and sometimes even the facts.” Her work is detailed and admirable. She sidesteps the red herrings. It is not easy to write of Jehovah’s Witnesses because the subject either draws or repels—strict neutrality is very hard. It is Hebrews 4:12 at work: “For the word of God is alive and exerts power and is sharper than any two-edged sword and pierces even to the dividing of soul and spirit, and of joints and [their] marrow, and [is] able to discern thoughts and intentions of [the] heart.” She thanks one mentor in her foreword for never asking, “Why Jehovah’s Witnesses?” I added, “If he didn’t have to know, then neither do I. We don’t have to know everything.”