Home Archives Profile Subscribe
Object Lessons at the Memorial Talk.
And Jehovah’s anger began growing very hot, and in the eyes of Moses it was bad

This weekend there was no regular meeting due to the Memorial of Christ’s death celebrated Saturday night. Most members linked to a discussion of the daily text that morning, which of course, was a discussion of that occasion.

To one idiot who said the Bible MEANS what it SAYS and SAYS what it MEANS, and every word is LITERALLY TRUE, John Caister quoted Leviticus 20:24 and told him to get out the hip boots for slogging through that milk and honey. #midweekmeeting

That one sister gave a downside to returning to Egypt not usually mentioned—they would not be able to observe the Mosaic law there, only recently given them. Plainly, that law wasn’t that big of a deal to 10 of the 12. ...1/2

“If, though, we became obsessed with guilt over our past mistakes, we could begin to doubt whether Jehovah has really “blotted out” all our sins. (Acts 3:19)”

That congregation member who went on to serve as a need-greater in Myanmar just returned from that assignment today, hoping to go back eventually, but not sure if it will be feasible.

“I didn’t know what their reaction would be. Sometimes you imagine people laughing at you.”

Everyone likes Nita and Jade, on the program this eve. I admit that when I first heard her respond to the Learn Bible Truth sign with “Give me a truth,” I did not understand her for the accent. I am American, after all.

“I’m not sure who Galaxy x-9 is” the conductor says. If it was me, I would answer in a robotic voice just to get him going.

You must admit that the video plays up the wholesomeness of Nita’s life and the disorder that is Jade. Ah well, it’s only 2 or 3 minutes long and you have to pack in the point

My wife looks at me whenever I sing words that aren’t there, or substitute words that don’t necessarily make any sense. “Huh! The brothers got the words wrong,” I tell her.

I liked that video of the bro reflecting on maintaining neutrality in 1970s Zaire. Intimidating for declining flag salute, for not joining the one political party, demoted for those reasons, which made daily needs difficult, he nonetheless held firm throughout is life.

The preceding (of Zaire) prompted the conductor to quote Ernest Hemingway: “Courage is grace under pressure.” How many elders would do that? (or know that?) I didn’t.

I am the reader this eve for the Ezekiel book, but the reading is canceled for lengthy announcements. Only the read scriptures I do. Like “Very soon I will pour out my rage on you, and I will fully unleash my anger against you, and I will judge you according to your ways...1/2

and call you to account for all your detestable deeds. (Ezekiel 7:8) Well, now that you put it THAT way. Pretty sobering stuff....2/2

Yikes! This time it was ME that didn’t unmute! (I blame my computer—but not aloud—no one wants to hear it.) There is someone who not only almost always forgets to unmute, but, once unmuted, feels obliged to explain how it happened.

Of course, that gold in the streets verse is tied in with something like Matthew 6:24: “24“No one can slave for two masters; for either he will hate the one and love the other, or he will stick to the one and despise the other. You cannot slave for God and for Riches.”

Appropriate announcements about the Memorial, the upcoming visit of the CO, someone’s relative who died, and several who will be aux pioneering, and we’re done.

Two toddlers in the congregation. Everybody oohs and ahhs over zoom at how they have grown,

One sister in a big house tells in the breakout rooms how the hamster got loose and fell 2 stories down the vents, but shook it off and carried on. 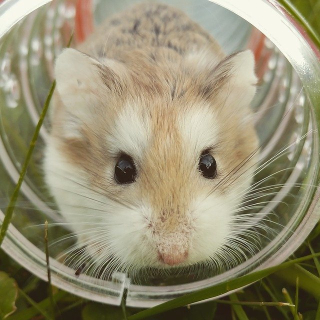 ....The Memorial itself was not live-tweeted, of course. But I posted some of it later here”