Peace was not a virtual [virtue] in Egypt, says Bob Brier, war wars [was]. You were supposed to send an army into faraway places, conquer, and take back to Egypt everything that “wasn’t nailed down.”

King Tuthmosis III, was he off in military training while his stepmom ruled? That’s what Brier thanks [thinks], but other Egyptologist think he was just shoved aside, maybe jailed, while his mom ruled.

Now comes a discussion of the military. The chariot required three types of ward [wood], yes [ash] or something flyable [pliable] for the wheels, somethings heavy for the axle, like oak.

They broke a lot. It means traveling are made [armies] needed lots of carpenters. One guy driving on a platform, the other guy shooting from the platform. “High maintenance vehicles” Bob Brier calls them. I love that verse of Jehovah taking the wheels off the chariots as told in Exodus. Ha. As

The king would ride right up front, calling the shots. Year two of Todd Moss soul rain, [Tuthmosis’ reign] he leads into Megiddo, in Syrian Palestine. Is this the material [Megiddo] of the Bible? I think so.

Three routes into Megiddo. Two are flat and open. One is in a valley. Against common wisdom and military strategy, Tuthmosis takes the valley. He surprises the enemy, who expected him to take another way, and routes [routs] them completely.

However, distracted by taking spoil, the defeated army gets away “Because the men plundered, we had two siege this city for seven months,” the record reads.

The hut is covered, so when guys on the top are throwing down rocks, it won’t hit those under the hut. So Bob describes the rudimentary tank that Egyptian’s invented, guys underneath the hut carrying battering rams, tanked pushed or pulled by guys. (or animals?)

For the next 18 years, he marches forth to Syria every year. Why?

It is their religion that causes a constant state of war. Egyptians did not colonize. You did not want to die outside of Egypt, where you would have no one to embalm you, not be buried in sacred soil, and so would lose your chance at immortality. No one wanted to live outside Egypt.

So you conquer, tell them to send tribute. Send so much of this, so much gold, so much of that. But you’ve been gone for a year. They forget. So you have to go back, “beat them up,” and remind them.

Bob Brier is from New York, he says. So that means he knows nothing about flowers. But when Tuthmosis returns from Syria he has the flowers he’s seen painted on the walls at Karnak temple. They’re not very good drawings, Egyptologists tell Bob, who wouldn’t know otherwise.

So was he an amateur botanist?

He is “the greatest feral [pharaoh] who ever lead an army, by far“. “And they had some great ones,“ says Bob as though telling of his favorite children. You can visit Tuthmosis’ tomb, a metal walkway takes you to the entrance, because the stone steps were chiseled away, probably to protect the tomb from grave robbers.

Four kings in a row, each reigning about 30 years. A sure sign of stability.

Big bureaucracy in Egypt, Bob says “not unlike Washington DC”. “Guys keeping track of things, guys checking on each other.” All the taxes had to be kept track of. Bob is from the Bronx. They are all “guys” to him.

Two capitals. Thebes as the religious center, and 500 miles to the north, Memphis is the administrative center.

Amenhotep III invents the first telegrams. Commemorative scarabs. One presents his commoner wife Tiye, and says you’d better respect her. Another tells of his hunting prowess. Bagged 56 bowls [bulls] in a day.

He has a name for the boat he has built his wife Tiye. It is “The Atem Gleams. A trivia question to remember for a future lecture, Bob Brier says.

Amenhotep is a builder. He builds Thebes, or Luxor, is responsible for its modern skyline, Bob says. It is the first time I’ve heard of the Luxor Temple. Luxor is one of the cheaper hotels in the game Acquire. I used to love that game. I still do enjoy it, but there are not many who play. It’s been superseded by other games, Scrabble of course, but these days also Splendor, which is shorter, and less potentially frustrating. 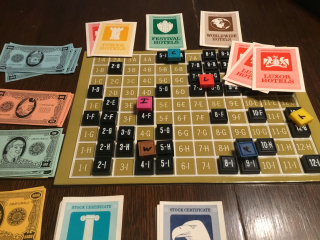 And Acquire has an odd attribute—that you can think your playing well right up to the end, only to find you’ve lost. Conversely, you may think you are losing, only to find you have won. But with that caveat, it still is fun.

Amenhotep settles in Thebes. His predecessors had been in Memphis. Is he getting religious in his older years. Or likes the warmer climate for this old bones. “People go to Florida,” Bob says. Maybe Amemhotep did the same.

Amenhotep III takes his 2nd son (the first died) with Great Wife Tiye as “coregent.” Bob Brier has seen mummy with its teeth. They are so bad he thinks the guy must have been in constant pain,maybe even sedated & needed a co-regent to hold down the fort.

This second son, who wasn’t supposed to be king, “turns Egypt upside down.”

And just now—as this story is being written—comes the discovery of ancient Luxor. Said to be the biggest news since Tutankhamen’s tomb.