Home Archives Profile Subscribe
Mathematics and Everything: From Hannah Fry to Stephen Fry—Part 2
Jehovah’s Witnesses: The World’s Most Persecuted Religion—Part 1

No narrating into the phone today. It’s too cold. A few days ago it was almost 80. Now it is in the mid-30’s, wet, and blowy. Today walking the dog I’ll must take in the lectures on the headphones and write them up later:

Lecture 25: the end of dynsasty XVIII

No children from the final 3 kings, big problem for continuity.

Horemhab is the last of three. A military general. He is the one who first integrated priests into the army—the first “chaplains?” He saw how powerful priests were with the people, figured ‘best get them on our side.’

That monotheistic king—Athenaten? He’s an embarrassment by now, and subsequent kings try to erase him. That’s why little is known about Tutankhamen other than his intact tomb—the only one that is intact.

The restoration stela at Karnak says that after Athenaten, the statues of the gods had  been melted down (even the one god Athenatem worshiped he said there would be no images of), weeds were growing in the temples, the military was no longer respected.

The images and the weeds—two scenarios that repeat whenever the faithful Israelite kings toss out the riffraff and restore Jehovah’s worship! Only here that is considered a bad thing, not a good thing.

Look, I’m going to chase this down someday. If Joseph can be connected with the Hyksos, Athenaten is not too far removed from him—is he Joseph apostasized? No, I don’t expect to find what the great men have missed. Still, you never know with great men. Sometimes they make assumptions that mess up all subsequent conclusions.

I wonder if Bob brings up and speculates about this later. There is an upcoming lecture about ‘Exodus—did it happen?’

Bob loves mummification. He has done one, you know. (I wonder on who?) People come to Egypt and they want to see two things: pyramids and mummies. Mummies are special, he says. A recognizable figure staring at you from thousands of years in the past.

Still, they weren’t much cared for until recently. Artifacts were, but it did not occur to the collectors that dead bodies should be. Now Bob Brier will try to retrace how dead ones were mummified.

Not easy, because no written instructions were kept. Just a relief he tells of somewhere that shows the mummified body up on two blocks, so you can wrap underneath with out disturbing it. “Like jacking up a car,” the professor from the Bronx states.

He spends time on embalmers, that they in many ways like undertakers today—a family profession. They might have several being embalmed at the same time, and they had different options representing different expense levels!

Just like when I buried my Dad and I told the undertaker that JW’s (Dad was not one, but he would have agreed on this) view the body as a container. At death, the person no longer has any need of it. Therefore, cremation would do just fine.

He said he thought of bodies much the same way. Did it give him the creeps working alone at at night amidst bodies? He said sometimes at first, but the feeling quickly fades. (I’ll bet he doesn’t feast on horror shows, though.)

This is the funeral director who let me sit is his vintage Cadillac, picked up from some Hollywood mogul. It had been in a few films. 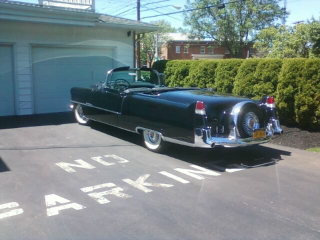 How to do mummies was a trade secret, not written down, but for Herodotus, since he was going away, Bob says embalmers told him a lot. Like how they take the brain out—through the nose with a “sharp Ethiopian stone.” Bob figures obsidian.

I think it was mainly Mormans in the camps wasn't it ?