Home Archives Profile Subscribe
I Knew the Punchline
Tweeting the Meeting: Week of April 5, 2021—Visit of the Circuit Overseer

After the first Egyptian dynasty period of six dynasties, comes the intermediate period, About which we know almost nothing, says Bob Brier.

Kurt Mendelson gets credit; he’s written books that Bob thinks is wrong. But Bob likes that he thinks things through. Kurt thinks Egypt went into decline when priests persuaded people that temple pyramid building was wrong ...

and this led to unemployed laborers, who got so rowdy that the country went into downfall. Bob thinks he’s all wet. But who can say?

Manetho says of the first intermediate period that there were 70 Kings in 70 days. It’s not literal, Bob says. But it means turnover was high, or there were kings raining [reigning] consecutively in different places.

Bob Brier explains the period of limitations, [Lamentations] of the middle., By saying “people are complaining” it’s as good an explanation as any. And the Bible book of Lamentations is not the only such collections out there!

The value of a book of Lamentations is from the early middle period. In that, from what they are bitching about, you can piece together what went wrong in the intermediate., About which Bob says we know almost no nothing, even though they lasted as long as the current history of the United States.

Bob repeats that Snefaru was his favorite feral, [Phoraoh] for he taught the Egyptians how to build pyramids . The book of Lamentations longs for the good all days of Snefaru..

When Egyptian’s traveled, which they almost never did because Egypt was the best place on earth, and it rained, which it never did and Egypt, they said “this land has its Nile in the sky.”

That was bad. Their Nile flowed down the middle, predicable and always there. It didn’t fall haphazardly, unpredictable and not always there.

Lamentations is about divine order and social order being turned upside down. It rather reminds of the Ecclesiastes verse of foot soldiers on horseback, and princes plodding along on fort.

“I have seen servants on horses but princes walking on the earth just like servants.” Ecclesiastes 10:7

Egypt was the worlds largest bureaucracy, the first one to systematically tax. They text [taxed] according to how high was the Nile. The higher it was, the better your crops should have been.

Oh. OK. Another reason the intermediate is so hard to study is that the capital Memphis is gone. It is underwater. Two or 3 feet. Probe with a pole if you are excavating, hit something and somehow dig down to find what you have hit

So, the middle period consists of the 11th and 12th dynasties. I’ve got it now. The dynasties are consecutively numbered, and then imposed upon them is, first period, intermediate, middle, and so forth.

Bob likes the dynasty that built the pyramids, the first period. Which consisted of the first six Dynasty’s, though the fifth and sixth was all downhill, maybe even the fourth. I forget.

Bob has reached the point in history where he comes across the feral [Pharaoh] described as the first dog lover. He had five dogs. One of them was named Blackie. [this revelation caused Samson to stop in his tracks and suddenly take notice.]

This is not Sampson the Bible hero, who pushes apart the pillars. This is Samson the dog, who pees on them.

Egyptian’s were pet lovers. Look under any chair or table in the artwork, and there is often a pet. Samson is very interested now. Oh. Bob just said cats are the most highly prized Pat. Samson has lost interest, and pulls on his leash. Time to get a move on, he thinks.

I forget the rationale, but Bob is calling Kings by the name of Intel [Intef] now, first beginning with the 11th and 12th dynasties

The Egyptian’s loved words that were on the wedding poetic. [onomatopoetic]Cat was they ‘meaw.’ Donkey was a ‘ee-aw.’ Wine was urp. Bob thinks it is from burp, which is what you would do after much wine

Almost always. Middle kingdom burials are lying on their side, facing west. “They know where they’re going,” says Brier.

It is during the intermediate that all the tools [tombs] are robbed. That is one of the themes of limitations. [lamentations] “Kings have been cast up.” That is, they were dug up from their burial tubes and just cast on the earth as robbers made off with there stuff.

The New York Metropolitan Museum of art displays nearly everything at the house. There’s nothing in the basement. Unusual for a museum, which is often keeping the good stuff out of sight.

Winlock, 1920 Director of the New York Museum of Art, excavated in Egypt. He found many cool things. His museum has health [half], the Cairo Museum has the other half. It was the deal back then. Today, Egypt keeps all.

A certain religious figure is described by Bob as the Ka priest. Were the ‘ah’ sound, as in Brooklyn .Sorry, but my mind wandered to a used car lot where the star salesman might be called a cah priest.

Death Comes in the End, an Agatha Christie novel, was based on the Haggadah letters that Winthrop discovered. Agatha’s husband was an Egyptologist. She knew Egyptology.

The 11th dynasty, in the middle period, starts to restore Egypt to its heyday. Recall it started to go downhill beginning with the fifth dynasty of the first period. No more lectures for a while, until I get the next batch of CDs from the library.

Walking the dog, finishing up now, I’m passing through a field  and I see many discarded masks. Did you know that those things are not biodegradable? They leave trace plastic everywhere, and animals ingest them.

And don’t get me going about plastic in the waterways. Someone this picture says more that 10K words will: 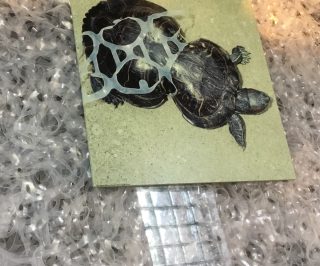 Of course, that reminds me of the NPR story about the plastic scam. 10% of all discarded plastic has been recycled, no more. It’s not feasible to recycle, for new is cheaper, and the recycled is not as good. And the makers always knew it but tried to salve public conscience to go full steam ahead with sales.

Somehow I’ll let that stand as a metaphor for this entire system of things, that promises so much, has you believing it for decades, and only toward the end do you find it delivered just 10%, if that.