Home Archives Profile Subscribe
Live Tweets from Ancient Egypt: Part 8
For a Limited Time Only—3 Barbs for that Speaker You Love to Tease

King Amenemhut I has a prophecy about himself. It is an Leningrad museum. He is prophesied as son of man. Previous ferrules [pharaohs] were son of Ray. [re—the sun-god] It is to say a commoner is destined to be King.

Brier thanks he may have been someone like a prime minister to the previous feral [pharaoh], not royalty.

Amenemhut does a land survey. It is as if to say “I have arrived.” The bad old days are gone. He has himself a pyramid build, just like in the good old days.

The opening of Amenemhut Pyramid, alligns north. Lines up with the North star, the north star is fixed. All the stars rotate around it. It is as if the feral [pharaoh] says I am fixed, I am just as stable.

How do you say the pharaoh is God when there are two coexisting ferrules? [pharaoh] Bob brings up, but doesn’t know the answer, to these questions....2/2

Artwork that shows tired pharaohs, facially. Well-built, but tired, as the board [bored] with being feral? [pharaoh]

Papyrus exists supposedly from Amenemhut warning his son to always watch his back. ‘I was benevolent, and look where it got me,’ Very cynical papyrus, Bob Brier states.

One tired barrel [pharaoh] of that time built his pyramid with the entrance facing south, unlike all the others. To fool to robbers? It fooled Petrie the archaeologist....1/2

He found it only by excavating from the top street down until he hit the burial chamber. Even then it was an easy, for there were many passages that were dead ends...2/2

Amenemhut IV dies, he is the last of the dynasty. We don’t know too much about him. He has a temple, but it has been ruined. The dynasty ends with a queen, a sign of trouble, Bob says. Why didn’t they have a king?

Beginning of lecture 14, the second intermediate.

It is for the second time that Egypt civilization collapses almost totally, Brier says. In fact, he says Egypt is the only civilization ever to have completely collapsed twice and got its act back together both times.

If you build your pyramid in Dash sure [Dashur], Brier says, he calls it “going back to the good all days”. It is where feral Steven [Pharaoh Snefuru] build his massive pyramids. ...1/2

The others that the 12th dynasty built were not that good, the ones the intermediate. Were worse still....2/2

Did those later ferrules [pharaohs], pyramids, built in – have an inferiority complex? Bob uses the phrase. He thinks so lost half. One says, not since the days of Snefuru. A bit like the temple OK guys time [of Haggai’s time] that was good, but not like of old

And early feral [pharaoh] of that next period, Whore, [Hor] short for Horus, has a statue with two arms extended straight up from the head. Bob Lykins [likens] it to a referee signaling a field goal.

Again, Brier  point salt [out] that when the Greeks came in from the north, they saw this marshy triangular land at the mouth of the Nile. Because it was triangular, they called it the delta, their triangular letter. So all river deltas are named by the Greeks.

When Egyptology started, the motive was to prove the Bible. The first society so dedicated was called the Delta Exploration Society.

They dug in the Delta, hard to do because it has standing water, but they were looking for traces of the Israelites leaving Egypt.

In time it became known as the Egypt Exploration Society, I name it still holds.

The 14th and 13th dynasty, temples and tombs supposedly in the Delta, but the Delta is marshy and stuff has sunk down very hard to excavate and who knows if claimed temples are actually there? ...1/2

Bob doesn’t think much of the ferrules [pharaohs] of the 13th and 14th Dynasty.

The Egyptians had a very special history, Brier says. They never kept records of the bad days.

The ferrules [pharaohs] of that time record no defeats. They just keep recording victories, each one closer to home, as they retreated.

This is the warmest day of the year so far. A beautiful spring day. 78. Low humidity. No box. [bugs] Mild breeze in the dog park. No wonder those agents [ancients] went bonkers in the spring, when the earth comes back to life.

I know my dog. It does not go in the water unless it is warm, to take a drink. Some dogs instantly head for it, warm day or not. 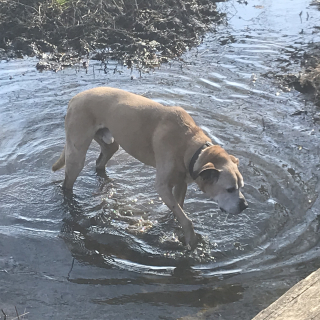 Of this period, Egyptians worship south.[Seth] I let this pass unmentioned before, but Seth is the evil god from a prior lecture. How can a Gyptian’s were shipped [Egyptians worshipped] the evil God? Bob says we don’t really know. Maybe, he speculates...1/2

the evil god turned over a new leaf and became good....2/2

Many times, Brier says: we can’t really be sure of this, or we don’t really know much about that. I can’t help but wonder, what of the things he is sure of or thinks he does know? Is all of it that way?

The Hyksos [AI spelled this correctly—first try!] didn’t integrate well Brier says, they ruled from the north. Some have said they were the family of Joseph. Bob thinks they were illiterate. Reliefs are art work only, with no words.

There is no dynasty 16, Bob says, it’s a spurious dynasty. And he passes on to Dynasty 17, the dynasty that kick the pixels [Hyksos] out. Bob cheers this, the Egyptian‘s are back in charge—his guys.

“The hippo pot a mess [hippopotami] is in your pool are keeping me awake at night.They have to be silenced.” It’s a papyrus, from the last Hyksos king to the Prince of thieves [Thebes] 500 miles south. Inflammatory for sure.

The prince sends an army in retaliation. How does it turn out? No idea. The papyrus breaks off.

The first and the last part of the papyrus role is often no good the inside one so tightly wound that it breaks. the outside on the outside where it gets knocked around a lot.

The thieves king retaliates, dies in battle, as Bob thinks can be told from his mummy, which exists. His sons succeed in chasing the Hyksos out of Egypt, and to Palestine. Bob likes this. He sides with Egyptian’s always. They are his people.