Mathematics and Everything: From Hannah Fry to Stephen Fry—Part 2

You can always trust Albert Einstein to come up with good questions. You can trust him to dive into the scientific but not abandon the spiritual. You can’t trust everyone to do that but you can trust him. For example, he says:

“Here arise a puzzle that has disturbed scientists of all periods. How is it possible that mathematics, a product of human thought that is independent of experience, fits so excellently the objects of physical reality? Can human reason without experience discover by pre thinking properties of real things?”

Morris Kline answers. He is not dumb, but forgive me if I suggest that his huge oversimplification is: “What we have achieved by way of mathematical description and prediction amounts to the good luck of the man who finds a hundred-dollar bill while casually taking a walk.”

It’s like Douglas Adams (the Hitchhiker’s Guide to the Galaxy), who also isn’t dumb. In fact, he’s smart, just like Kline is. But, like Kline, he hugely oversimplifies it. Try oversimplifying a paragraph of his book, and he’d howl like a rhesus.

Adams addresses people who believe that God must exist because the world so fits our needs. He compares them to an intelligent puddle of water that fills a hole in the ground. The puddle is certain that the hole must have been designed specifically for it because it fits so well. The puddle exists under the sun until it has entirely evaporated.

Whoa! What a great illustration! All you need do for it to be perfect is find an intelligent puddle of water. It is as though these pillars of thought leadership just dissolve into mush when they try to explain away what any 5-year-old knows can’t be explained away.

Take this tweet from Richard Dawkins—no one sneers at God more than he: He quotes Einstein again, just like I did in opening this post: “The most incomprehensible thing about the world is that it is at all comprehensible,” the great one says. Dawkins adds: “But what is the alternative to comprehensible? What kind of a world would it be if it were incomprehensible? What would it look like?” He even invites his audience to “discuss” his moronic question.

My contribution was that it would look like this: 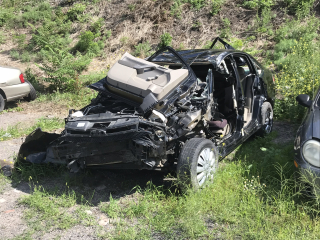 Careful, Tommy, careful. Remember, Dawkins (and Kline, and Adams) is a Great Man, and you are not. You really going to call him moronic? You really going to go the route of the one who doesn’t suffer fools gladly—and a fool is anyone who disagrees? Really?

Sigh...of course I am not. I am chastened. Dawkins has more Twitter followers than I do—and THAT probably is not only what the world would look like if it were incomprehensible, but the greatest proof that it is! Even so, sometimes a child with fewer followers than he must say: “The emperor has no clothes!”

Now, if I say that Hannah Fry’s doing a math show to make me mad, it must be conceded that math can make a person mad. It is not so directly transferable to reality as may at first glance appear—and in accounting for this, the renegades are emboldened to take shots at God.

Everyone knows that parallel lines never meet. They know that by looking down the railroad tracks. The rails may seem to converge, but it is just an illusion. So do you think that simple math (geometry) will come down on the side of illusion or sense? It comes down on the side of illusion! In real life, if you walk down a few hundred yards, you see they are still apart—they don’t touch. In geometry, they do!

Do a thought experiment Start in your head with two perpendicular lines; one is horizontal, and one is vertical. They cross. Call the point where they cross ‘P’. Grab hold of the vertical line just above the horizontal line and start to pivot it. What happens to ‘P’—that point of intersection? Doesn’t it move farther and farther down the horizontal line. At what point does it “jump off” to make the two lines parallel?

When I played this trick on guys in the workplace, some saw right away that the lines would never separate—designate a place of separation, and why can you not draw a straight line from the pivot point to a point just a bit further down from your separation point? Some guys walked away scratching their heads. Some got mad, as though I was messing with reality.

So can you seize upon such things to throw out God? “Mathematics is the alphabet with which God has written the universe,” says Galileo, but since there are some strange letters in that alphabet, that means he didn’t write it. Can you go there? Why not do a Job instead?  “Look! These are the fringes of his ways, And what a whisper of a matter has been heard of him! But of his mighty thunder who can show an understanding?”  (Job 26:14)

The woman following Jesus thought it enough to touch his outer garment, and it did wonders for her when she did. She didn’t have to try the garment on herself. Why doesn’t that satisfy the scientists? Why can’t they just acquiesce to “My ways are higher than your ways?” (Isa 55:8-9)

Return to Einstein, and even my observation of him that he will delve into the scientific without junking the spiritual, ofthe developing field on quantum mechanics, he observed:

“Quantum mechanics is very worthy of respect. But an inner voice tells me that it is not the genuine article after all. The theory delivers much, but does not really bring us any closer to the secret of the Old One. I . . . am convinced that He does not play dice,”

Alas, Einstein caught Him playing dice!—the weirdness of quantum mechanics has proven true. But it didn’t stumble him. He didn’t say, “Well, I guess there isn’t any Old One.” He said (not literally) “Well, I guess Old One is older than I thought, and a cagier too.” I mean, who says he has to spell it all out for humans to understand readily. He’s God. He can do what he wants. “If I were hungry,” he says at Psalm 50:12, “I would not tell it to you.”

Exactly. Are humans going to help him out?