“It was a horrible, nasty, vicious piece of work,” hissed Andy Currant about Piltdown Man. But the reason it was horrible, nasty, and vicious is that it made his revered heroes look like fools. Had it been his enemies made to look foolish, he’d be singing its praises to this day, most likely. Scientists steeped in evolutionary thinking confirmed the prehistoric man was genuine. The fraud remained undetected for 40 years.

However, what is truly a horrible, nasty, and vicious piece of work is that nobody told me such dupes were to be found much closer to home—at nearby Cornell University. It took a trip to Taughannock Falls to break free from the blinders they’d all tried to fit me with. In 1879, local scientists, steeped in evolutionary thinking, had chipped a few small pieces loose from “Taughannock Man,” unearthed in by workmen widening a driveway, and had upon analysis declared the petrified man authentic. But it wasn’t authentic. It had been (literally) cooked up just weeks before in a local mechanic’s establishment, and was made of stone dust, eggs, minerals, iron filings and beef blood.

It had then been slipped in sideways though a tunnel. Tree limbs had been twisted about its neck, as though having grown there ages later. The dirt overhead, therefore, literally had been undisturbed for centuries, and this was among the circumstances that caused the Cornell experts to swoon that they, too, had discovered a prehistoric man—and right in their own back yard at that! 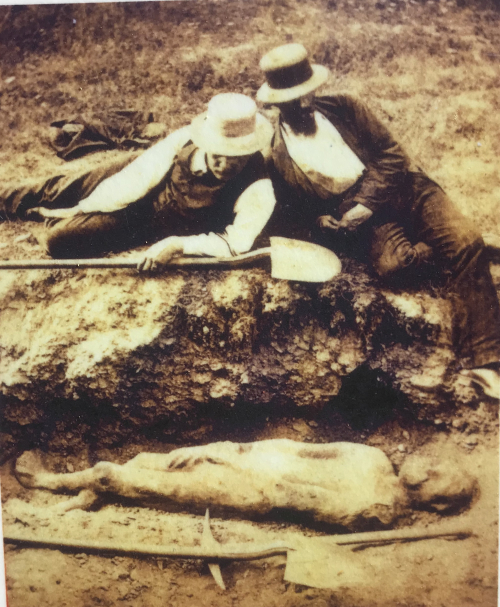 Fooling the great men does not appear to be the motivation, as it was with Piltdown Man in at least one of the several theories offered as to its creation. Taughannock Man was a straight-up publicity stunt, aimed to drum up business for the expanding Taughannock Hotel. That same year, its proprietor had hired a stuntman to tightrope-walk the adjacent gorge. It was a lavish hotel build next to lavish surroundings. Railroads dropped off visitors at the north and south ends of Cayuga Lake, steamboats took them to a landing point, and stagecoaches took them to the hotel, which—alas—burned to the ground in 1922. If there is one common feature of magnificent historical wood buildings, it is that they burn to the ground,

The main attraction of Taughannock State Park is Taughannock Falls. You can see it from the visitor center on the northern rim of the gorge (built upon the site of the old hotel—a display legend indicates the location of an excavated wall), but for best results, you hike the easy 3/4 mile trail up the gorge from the main park entrance. The cliff walls close in upon you from either side and in due course you are just before the falls and looking up, not down as you would be from the visitor center. The water drops 215 feet, making Taughonnock Falls the largest single-drop waterfall east of the Rocky Mountains. It drops further than Niagara Falls. 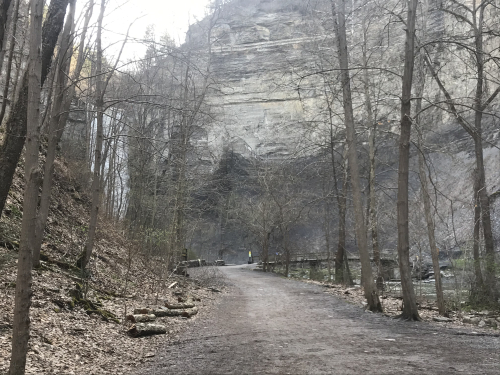 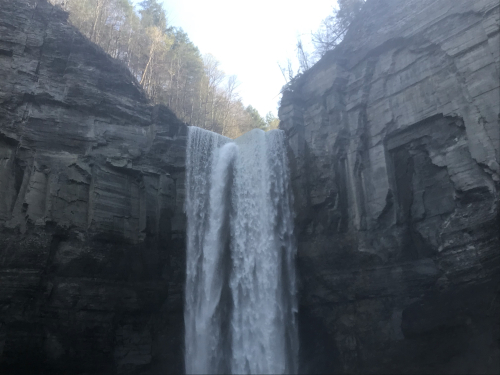 Besides the Park display legend, I found two other sources telling of the Taughannock Man hoax. One is a bland nostalgic piece from the Ithaca Times, gently chuckling at the outrageous old days that could never happen again because we are so much smarter. The other, from lifeinthefingerlakes.com, leaves open the possibility that it could happen all over again because we are just as dumb as we have always been. The bland piece even seeks to cushion the great men from Cornell University, saying their analysis yielded “decidedly mixed results.” But the fingerlakes piece and the park legend both say that they swallowed it hook, line, and sinker.

Gullibility is old and its not going away. Bob Brier, the Egyptologist, tells how pharaohs never recorded their defeats (so, of course, no one else dared to do so either). They only recorded their victories. He relates the exploits of one pharaoh who recorded victory after glorious victory! each one closer to his home base (because he was retreating).

With regard to the evolution theory, the Jehovah’s Witness organization appears to have no problem with “micro-evolution.” It is macro they choke on. Of course, they do not champion either, since that is neither their specialty nor mission, but micro, which is not all that different from animal husbandry, the stuff of what Darwin observed on the island, they can let stand without throwing stones at. It is the “kinds” of Genesis. They even invited Michael Behe over to talk shop.

Taughannock Man, along with the more famous Piltdown Man, is clearly macro. Piltdown is rightly more famous, because with it there was no town drunk to spill the beans within weeks, and the great men were fooled for forty years. However, in an effort to save face, they have declared that they were not fooled at all, they were not that dumb, that they smelled a rat almost from the beginning.

If so, this makes it worse. It replace gullible with fraud, for they said nothing about it. Moreover, it is contemptuous fraud, the sort that rt.com resorts to when reporting on Jehovah’s Witnesses, when whatever reporting they present takes place amidst of backdrop of religious crazies doing truly crazy, bizarre, pugilistic, cultish things that have nothing to do with Jehovah’s Witnesses, as anyone who knows the slightest bit about them will instantly attest. (chapter 13 of this work)  In the case of the evolutionist fraudsters, it is: “Tell the dummies anything you must to keep them on board—who cares if it is true or not.”

Thus it becomes necessary, as it so often is with me, to bring in Bob Dylan with what started as a joke. Explaining a metaphor to Evo-Ann that any child would instantly understand, it reached the point of my posting a tree fallen across the road with the comment that it was blocking “Evolution Row.” 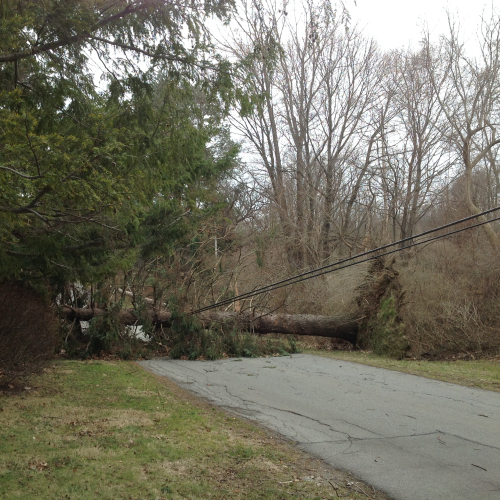 Sometimes something gets in your head and you knock it around a bit and come up with more. “Evolution Row” is actually not a bad interpretation of the song “Desolation Row.” Take this portion:

At midnight all the agents and the superhuman crew

Is strapped across their shoulders and then the kerosene

Is brought down from the castles by insurance men who go

Check to see that nobody is escaping to Desolation Row.

Anyone familiar with the Bible, as Dylan is—he did a stint as a born-again Christian; listen to Slow Train Coming, for example, and you’ll see he is thoroughly familiar with scripture—will know who is “all the agents and the superhuman crew.”

At the darkest time, they round up everyone “who knows more than they do.” Well, nobody knows more than does the “superhuman crew,” so it must be a reference to those who think that they they know more than others, who think that are very smart indeed, and that take great pleasure in parading their knowledge before everyone else, quick to disparage anyone in their path, ones who don’t suffer fools gladly—and a fool is anyone who disagrees with them.

Despite their self-heralded knowledge, they are “rounded up” and processed, as though in a “factory.” The knowledge that they take such pride in is nevertheless death-dealing, like a “heart attack machine strapped across their shoulders,” with “kerosene” thrown in for good measure.

Despite their knowledge being death-dealing—settling for a few dozen years lifespan at best and then eternal blackness—nobody must escape this tripe. “Insurance men” see to it. Nobody will escape from Evolution Row. (Dylan actually wrote “to Desolation Row,” not “from Desolation Row,” but it was probably a typo and I will set him straight when I see him next.) Let us not forget that the evolution teaching (in its full measure—not counting the intelligent design variety) is desolation to the Bible based hope of living forever on a paradise earth.

No, I don’t really think Dylan had that in mind. Other stanzas don’t so readily lend themselves to that interpretation. But it’s not a bad interpretation all the same. Dylan often writes in a stream of consciousness and doesn’t necessarily have any underlying message. It’s like decrypting Kafka. The tone is distinct, but the underlying words can be taken any number of ways. He is not inclined to pose as a great man with deep underlying meanings he is cryptically recording for all of humanity if they can but prove their worth by unraveling the message. Naw. He describes himself more like a modern Aaron, who throws stuff into the fire and “out came this calf.” (Exodus 32:24)

To see the Taughannock Giant, if your interest is peaked, you might think you could find it somewhere within Cornell, since it plays a part in that university’s history, even if an inglorious one. However, they red-facededly want nothing to do with it. The baked giant can be seen at the History Center of Tompkins County. Docents there probably retrieved it from Cornell’s dumpster.

Posted at 06:40 AM in Bob Dylan, Evolutionists, Travelogue | Permalink | Comments (0)