Notes from Ancient Egypt: Weighing in on Joseph and the Exodus Account: Part 1

Sitting in on Bob Brier’s Egyptology lecture series for Great Courses, you learn that nations don’t war on their neighbors. They don’t conquer them. They “beat up on them.” If he said it once, he said it a hundred times. List the accomplishments of any pharaoh: he built the temples, he built the tombs, he beat up on the Syrians (or whoever).

“Beating up” is especially emphasized in Egypt, for with them, there was no place like home. Egyptians warred with their neighbors constantly—“peace was not a virtue in Egypt,” Bob says—but they never established garrisons in those conquered lands. Why—were you to die thousands of miles from home, how could you be properly mummified? And if you weren’t that, what would happen to your chances at the afterlife?

So they didn’t stay. They “beat up” their neighbors, left demands for yearly tribute, but after a while, people forget. You have to go and “beat them up again,” to remind them they had better pay—carting off “everything that wasn’t nailed down” while you were at it.

What is it with this guy? Is he from the Bronx? In fact, he is. And even though he’s a professor steeped in Egyptian honors at Long Island University, he still lives in the Bronx. (as of 1999, when he recorded these lectures). Of the supports used to raise a body so mummy wrappings could be wound beneath him—“it’s like jacking up a car,” he adds helpfully, possibly while gazing through his window at a muffler being attached to a jacked-up car). 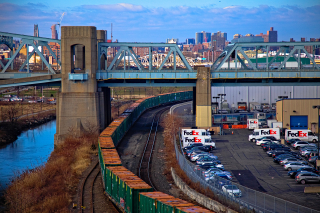 What would he do when he comes to Bible accounts? I wondered. He will blow them away, of course, but will he do it with respect or ridicule? He seems like a nice guy. But sometimes people with brains lose it when it comes to spiritual things.

To my surprise, he does not blow them away. He treats them with great respect and allows that they are probably true in essence. To be sure, the “external evidence” that is archeology is scant. Archaeology corroborates the Bible in many things, says Bob, but it says next to nothing about the Israelites in Egypt. However, what he calls the “internal evidence” is strong, and as an Egyptologist, he has learned how the two must be combined.

After the Old Kingdom period, during which the pyramids were built, there arose the “Hyksos,” kings who ruled from the north, the delta region. The word means “rulers of foreign lands.” Could Joseph’s family have been the Hyksos? Not much is known of the Hyksos, Brier says, they “didn’t integrate well,” Some have said they were the family of Joseph. Josephus says so. Therefore, I say so, too. I mean, someone has to correspond to Joseph and his brothers. The north is a  damp and marshy region, where archeological finds are meagre, inferior, and badly damaged. It is the dry climate to the south that preserves papyri for thousands of years.

At this point Bob Brier assigns his listeners homework. They are to read Genesis 37-50. Then he narrates the story—just who was Joseph and what was his involvement with Egypt, highlighting what these “guys” are doing and what those “guys” are doing.

There is no external evidence for Joseph, but what is the internal evidence? Does the story “hang together?” It does, he thinks. He recounts the Bible story, which ends in a tearful tale of forgiveness—Joseph sold into slavery by his jealous brothers, his quick rise in Potipher’s house, his reversal and hard times, his meteoric rise to fame upon deciphering the dream that had perplexed Pharaoh, and how those same brothers approach and bow before him decades later—he, the one now in charge of alleviating famine.

In a dream that nobody can figure out for Pharaoh until someone remembers that Joseph in prison had a knack for that sort of thing, he is brought to interpret the dream. Seven lean cows are preceded by seven fat cows. The lean ones eat up the fat ones! They are years of famine following years of plenty. During the years of plenty, preparation can be made for the years of famine. “Based upon Joseph’s interpretation of dreams, the economy of Egypt is planned for the next 14 years.”

Joseph shows what a “sharp businessman” he is during the famine period, is how Bob Brier puts it (perhaps as he is buying a used car from a sharp businessman on the corner lot). People get destitute enough that they eventually sell him their land in return for food. He makes Pharaoh very wealthy, and Pharaoh rewards him.

The ring that Pharaoh gives to Joseph—that also is how they would do it in Egypt, a ring to the “right hand man.” A signet ring. A sign of authority. When the Bible says, everybody cried out Abrek after Joseph—that’s “real Egyptian.” Somebody knew what he was talking about. He deciphers the phrase as roughly meeting ‘Let God be with you.’ (Genesis 41: 42-43)

For a long time, Bob had a problem with Egyptian priests admitting defeat in interpreting Pharaoh’s dream. They never admitted defeat in anything. But later finds cleared it up for him. There is a papyrus in the British Museum which is a book for interpreting dreams.

All dreams meant something, the Egyptians believed. They were all prophetic. The trick was in interpreting them. When you had a dream, you went to the priest to see what it meant. Everything was written down in a book. The priests didn’t “just wing it.” They looked it up in a book. “If it’s not in the book, you’re stuck,” Bob says. So Joseph‘s account has the ring of truth to it, he says. When they said to Pharaoh, We don’t know, about his dream, it just meant that nothing about fat cows or lean cows was in the book—it didn’t go there. So it wasn’t the fault of the priests, who never would have admitted a fault—it wasn’t in the book. (Genesis 41)

There’s a Egyptian inscription on Sahel Island of seven years when the Nile did not rise, resulting in famine. Another inscription shows skeletal figures of people who were not slaves. Potipher is an Egyption name. Goshen is where the brothers of Joseph settled—a real Egyptian place in the delta region. Two cities are cited with names they had at the time, and not names they would be given later. Joseph (and Jacob) are embalmed by the Egyptians and mourned for the proper period. The Joseph story is written by someone who knew Egypt, Brier states. Testifying that Hebrews did indeed come to settle in Egypt is the excavation of a classic Israelite four-room house, with its unique floor plan. A full-sized model of one can be seen at Semitic Museum at Harvard University.

“Internally, we get a feeling for the Joseph story that it fits. It’s not archaeological evidence, but the story fits.” Embalming for 40 days, mourning for 70. For a long time that was not understood, but it turns out that is how Egyptian‘s did it. (Genesis 50:3)

The Hyksos did not control all of Egypt. Instead, they coexisted with the Sixteenth and the Seventeenth Dynasty, which were based in Thebes, 500 miles to the south. Warfare between they and the pharaohs of the late Seventeenth Dynasty eventually ran the Hyksos out of Egypt. (and Bob approves of this, because the Hyksos are not “his guys”—they are not real Egyptian) Later leaders of them would be portrayed as oppressive and warlike.

A papyrus of the time, sent by the last Hyksos king to the Prince of Thebes, reads: “The hippopotami in your pool are keeping me awake at night. They have to be silenced.” What exactly does that mean? Dunno, but it’s not friendly. Inflammatory for sure, Bob says. The Prince sends an army in retaliation. How does it turn out? No idea. The papyrus breaks off. The first and the last portions of an ancient papyrus roll is often no good. The inside end is wrapped so tightly that it breaks. the outside end is on the outside where it gets knocked around a lot, torn and scuffed up over time.