Shishak Beats Up Rehoboam—From Egypt’s Point of View. And Why did Indiana Jones Search for the Ark in Tanis?

For 200 years Egypt was ruled by Libyans. That’s not a long period of time but its nearly as long as the history of the United States.

Head north on the Nile and turn left, Bob* gives the directions, and you will hit Libya. But you will have to traverse 200 miles of desert to get there, so we should not imagine an invading Libyan army riding that far to conquer. No, Prof Brier is sure that the Libyans that ruled were already in Egypt, in fact full Egyptians in all but ethnicity. They had been assimilated previously.

They were probably descendants of captives taken during the reign of Ramses III, Egypts last great pharaoh, Bob calls him. “One of the things he was proudest of is that he pushed back the Egyptians. The Egyptians were getting a little too populous. It seems that the Egyptians always minded when foreigners become too numerous. It was okay to have a few, but when they became a large body to be reckoned with they didn’t like that. As for example, remember the Exodus?”

Exodus 1:9-10 reads: “In time there arose over Egypt a new king who did not know Joseph.  And he proceeded to say to his people: “Look! The people of the sons of Israel are more numerous and mightier than we are.  Come on! Let us deal shrewdly with them, for fear they may multiply, and it must turn out that, in case war should befall us, then they certainly will also be added to those who hate us and will fight against us and go up out of the country.”

The captured Libyans assimilated and, in time, some turned to the military. Sheshonq I was the first of them to assume the throne after a dwindling series of impotent kings bearing the Ramses name. He married the right woman—a sure way to rise in Egypt—the daughter of Ramses XI.

Fighting is what he knew. After consolidating and appointing his sons in key positions, he look northward. Was not Judah ripe for picking? Solomon had just died, and his son Rehoboam didn’t know what he was doing. Sheshonq is the same as Shishak of 1 Kings 14:25-26. He came to conquer but Rehoboam “bought him off.” 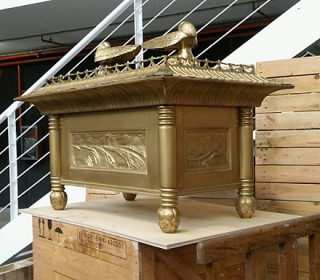 While he’s at it, Bob Brier eludidates ark: “It’s called a ark, by the way, because ark means box. That why you get Noah’s ark. It’s really a big box that floated on the water, basically.”

You know, it’s not a big point, and certainly Bob does not extrapolate on it here, but in a way it is. Artwork of Jehovah’s Witnesses invariably portray Noah’s ark as a floating box. Church artwork almost never does. To them, it is a storybook boat with bow and stern. When my wife and I stayed in the Cincinnati Best Western because we’d been hurricaned out from our original destination, that morning in the breakfast bar nearly everyone else, family groups all, were headed to the Ark Encounter across the state border in Kentucky. A huge ark replica—with bow and stern. (and dinosaurs!)

*Notes from The History of Ancient Egypt: Bob Brier, part 19