If they were “skinned and thrown about like sheep without a shepherd” then how much more are they now? (Matthew 9:36) Not only “skinned and thrown about” but they know it. “Have the governments of the world succeeded in bringing peace to the world? No,” says the public speaker. “Have they failed miserably? Yes,” he continues. Jehovah’s Witnesses appeal to those who don’t equivocate.

Seeking to run down the faith, one grumbler says its “publications pump out fear-driven content that keeps followers afraid that the end is coming...” Is it our publications that do that or is it theirs? Read the news headlines and try not to say it is theirs. One of my all-time favorite posts is that of the Newsweek cover decrying calamities of the week before capping it all with: “What the #@%! is Next?”

Normalize it if you will and some do. Those aren’t the ones Jehovah’s Witnesses look for. Anyone who doesn’t know where we are in the stream of time has been living in a coma, says Anthony Morris. Exactly.

Here is a study relating how “fifty-six percent of young people surveyed said they agreed with the statement that humanity is doomed, while 75 percent said they believed the future was frightening.” Are they “sheep without a shepherd—skinned and thrown about? They attribute their gloom to “their national governments, who they said were “betraying” them and future generations through their inaction” toward climate change.

Newsweek is up to its old tricks again. “A doomsday COVID variant worse than Delta and Lambda may be coming, scientists say,” screams its cover. That won’t make the young people feel any better, will it?  who now have yet another reason to feel doomed. 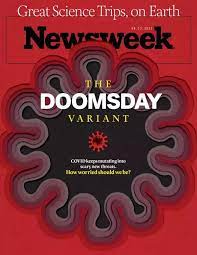 And Jehovah’s Witnesses are the ones scaring people? Just how do people conduct themselves when they think they are doomed? At least the Witness “scare” offers a way of escape. Theirs does not.

So maybe all this means that you don’t pussyfoot around with your new study guide. “The time left is reduced,” Paul said long ago. It’s much more reduced now. You don’s systematically examine belief systems so as to tell what wrong with them since the persons you’re looking at don’t have belief systems—they are skinned and thrown about, trying to find their way and place. Those who do sense at some level, whether immediently or in their gut, where we are in the stream of time—that’s who Witnesses look for. If they don’t sense it—there’s not much one can do about it. Look for those who do.

“This means everlasting life, their coming to know you, the only true God, and the one whom you sent, Jesus Christ,” says John 17:3. Okay. Got it. Hold off on involved stuff for now. See how the basics resonate. Focus on introducing people to those parties, God and his Son. Help them build their own relationship with those two—this is what the new study guide Enjoy Life Forever does. With a relationship to Jehovah and his son, the rest comes easy. Without it, the rest does not come at all.

Pressures from this system of things will cause persons to move in both directions—some into Jehovah’s organized Christian arrangement and some out. The appeal of Witnesses is that one may understand the Bible. “It can be an open book to you,” the tract used to say. Should that open book appeal fade, people will depart as quickly as they came. Sometimes the fact that “we have this treasure in earthen vessels” (2 Corinthians 4:7) causes ones to forget it is treasure.

“I don’t know,” Ruth, who was old even then, or was it that I was young? told me long ago as we were awaiting the householder to answer the bell—I don’t remember if he did or not. “They come in, and they go out. Seems it would be better if more stayed in.” Is it possible? We’ve consolidated Kingdom Halls in the US because they didn’t fill to overflow as we had hoped they would when we built them. One fellow at the coffee shop razzed me over one that had been sold. “It’s because of our great growth,” I told him.

If I had my druthers, I’d like to see focus on, not just why people come into the truth, but also why they leave it. “Demas has forsaken me because he loved the present system of things,” Paul writes to Timothy. (2 Tim 4:10) How could he do that? “We have wronged no one, we have corrupted no one, we have taken advantage of no one,” states Paul, (2 Corinthians 7:2) Who said that they had? There must have been someone.

Were there more focus on why some leave the faith even as others join it, maybe “apostates” wouldn’t hold the bogeyman status among Witnesses that they do. Defuse the mystery of their departure, for it is always mundane. “No temptation has come upon you except what is common to men.” (1 Corinthians 10:13) I’m struck with how when people leave, answers to the burning spiritual questions that drew them in seemingly vanish into thin air and are never contemplated again.