Home Archives Profile Subscribe
Tweeting the Meeting: Week of September 20, 2021
To Jab or Not to Jab—That is the Question. Part 1.

The #publictalk for this morning: Christian Separateness from the World—Why Beneficial.

Citing James 1:27, “Look after orphans and widows, and keep oneself without spot from world,” he spoke of ones spinning their wheels like car stuck in mud, & how close do you get?

Watchtower Study for Today: ‘Cherish Your Place in Jehovah’s Family’

Theme verse: “You made him a little lower than angels, and you crowned him with glory and splendor.”​—PS. 8:5,

“A little lower than the angels” (Ps 8:5) is how God made humans. Free will like them. How many will think humans closer to the animal kingdom than angels?

One sis comments on the 2nd portion of vs 5 (the one of ‘a little lower than the angels): “and you crowned him with glory and splendor” as a given, not something ones have to establish their own, for it is part of the package. They need only to live up to it.

Para 6: “He honored humans by giving them “dominion over” all his marvelous works on earth. (Ps. 8:6)”  I wonder if that’s why cruelty to an animal arouses such emotion, equal to or even above to a human? It so goes against our commission.

Para 7: one bro cites Prov 27:11–“Be wise, my son, and make my heart rejoice, So that I can make a reply to him who taunts me,” and is moved that humans have power to affect God’s feelings.

Para 10: “Jehovah gave his most precious Son so that we can once again become members of His family,” one sis commented on how at an adoption agency you similarly get to choose who will adopt.

It is a good investment of time, the Watchtower study. An hour of participatory discussion on how to live, with Bible principles underpinning all. For lack of knowing ‘how to live’ much misery stems

Para 14: “In brotherly love have tender affection for one another. In showing honor to one another, take the lead.” It kind of implies we should be trying to outdo one another in this area, one sis observes.

One bro cited that verse “In brotherly love have tender affection for one another. In showing honor to one another, take the lead.” (Romans 12:10) as what drew him into the faith, the observation of how people treated one another.

Para 16: On the power of good examples & bad examples, one bro (the speaker) recommends getting around that by simply focusing on Jesus’ example.

On Para 17: “Trust in Jehovah instead of in material things,” one bro comments on how having the dough to afford “many things” does not mean having the time to service them all. Cites the rich young ruler, holding many things, who turned down Jesus on that account.(mark 10:17-22)

As it turns out, we are Zooming in tonight from out of town—a very brief stop-off in Pittsburgh. Bummed that the aviary was closed—their eagle had escaped. ‘How does closing the aviary help?’ I asked an employee.  It allows them to be minimally staffed. Most of them are out searching for the eagle.

And lookee the sign we spotted on a sightseeing round. Look who spoke at Carnegie back in the day.Alas, the lighting isn’t so hot. 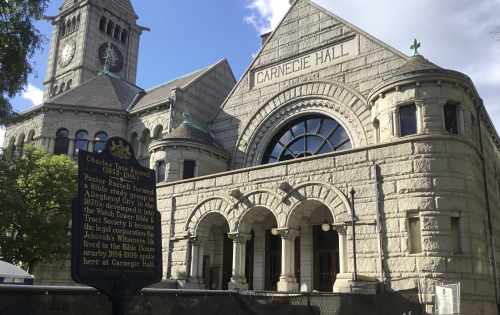 Jehovah wants to preserve the cleanness of the congregation, the speaker says, because Jehovah is a clean God, a holy God.

Grain found in Jericho, evidence that it’s siege was short? (Otherwise they would have eaten it) I didn’t know that.

First by tribe, then by family, then by household, and you know who is starting to sweat it. Joshua 7:!4

We’ve all been there so we all know where you’re coming from, says the chairman to the one who spoke of stubbing a toe for want of light in the corridor. Psalm 119:105

Be honest. How many of those study tips did you know on JWLibrary?

That is one sneaky looking Aiken with slimy conniving family to match.