Home Archives Profile Subscribe
Women Must Keep Silent in the Congregation?—How are You Going to Put Lipstick on THAT One?
Doesn’t That New Wild Beast Look an Awful Lot Like the Bible Wild Beasts?

Guitar leaning on the wall behind the speaker turns pre-meeting chit-chat to jazz. Turns out someone in his congregation is well known in the jazz world & our local aficionado knows him well. #publictalk 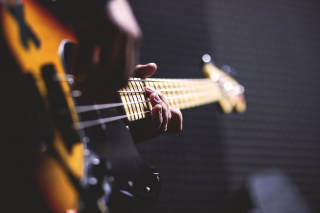 Speaker today is from the Pacific coast, and here we are in the east. How can that be? Ah—it is the congregation that one of our bros relocated to. On any heavy subject, defense lawyers, will look at previous cases before the judge to see how he rolls—let us do that with Jehovah, the speaker says.

Speaker takes a crack at the ‘probably’ clause of Zephaniah 2:3. Recalls his high school math teacher saying, ‘if you’ve learned these formulas’ you probably will pass the test tomorrow.

And the sea gave up the dead in it? (Rev 20:13) It is the resurrection. The dead were judged out of those things written in the scrolls according to their deeds. (Vs 12) What deeds? During one’s lifetime? No: “the one who has dies has been acquitted of his sins.” Romans 6:7….1/2

The “scroll of life” opened? —most likely new laws to be given in new system & how we interact with them will determine future. Such is the 1000 yr “judgment day.”…2/2

What do you call that sort of inspirational climbing the scales the way ‘A Prayer of the Lowly One Does? does? Maybe the speaker who has a guitar leaning on the wall in his background.will know the answer to that one,

Para 5:  Not a better passage of God’s historical mercy than Ps 78. From 37 on: “they were not faithful to his covenant.But he was merciful; He would forgive their error … often held back his anger Instead of stirring up all his wrath…he remembered that they were flesh…”

A wind that blows past and does not return.How often they rebelled against him in the wilderness And made him feel hurt in the desert!Again and again they put God to the test, And they grieved the Holy One of Israel.They did not remember his power, The day that he rescued them from the adversary,  Ps 78

but you do not know where it comes from and where it is going.” Not sure. Shelve it for a future look….3/3

Para 12:  “For I am with you,” declares Jehovah, “to save you. But I will make an extermination among all the nations to which I scattered you; However, you I will not exterminate. I will discipline you to the proper degree, And I will by no means leave you unpunished.” (Jer 30:11)

Para 13: “For what do I have to do with judging those outside? Do you not judge those inside,  while God judges those outside? “Remove the wicked person from among yourselves.” (1 cor 5:12)”

Good to know the fellow did eventually return.

Para 14: Upon return it is: ‘Paul told the elders that he did not want “to be too harsh.” He directed them: “Kindly forgive and comfort him….so that he may not be overwhelmed by excessive sadness.” 2 Corinthians 2:5-8, 11.

Para 16: “Whoever stops up his ear to the cry of the lowly one Will himself call and not be answered.” Prov 21:13

Para 19 New way to look at Nathan & David. “The rich man [who stole a sheep from the poor man] deserves to die!” David thunders. Well, he didn’t deserve to DIE, the Law made provision for such crimes. But David’s harsh judgment was rhetorically turned upon himself. (2 Sam 12: 1-6

Para 21: 2 sides of coin in Jas 1:27. Mercy to orphans & widows and Keep self without spot from world. Can only extend help when in position of safety oneself….“form of worship that is clean and undefiled …is this: to look after orphans and widows…keep without spot fr world.”

#Midweekmeeting: “Till his last breath he lacked humility,” the bro says about the fellow who couldn’t abide others knowing that a woman had killed him. #midweekmeeting, (Judges 9:54) abimilech

“When he spoke this way they calmed down,” says a bro highlighting the benefit of speaking peaceably (Judges 8:3)

So the OPIs work closely with the PIDs. Got it. And I can still recall Sam Herd grumbling about acronyms. Good PIDs, though, in Italy, Rwanda, and those that monitor Russia.

Get that cat off your fridge, Bonzo.

Those “restored from the people,” vs 8, & the thought repeated, “regathered from the nations” — is the Ezekiel 38:8-12 target for Gog of Magog.