Home Archives Profile Subscribe
What the Society is Trying to Say is….
Women Must Keep Silent in the Congregation?—How are You Going to Put Lipstick on THAT One?

The speaker displays a photo of a crazy leaning house. Would you put your family in there? he asks. His talk: “Real Peace and Security—When?”

Nations declare “peace” after a war, yet the hatred, jealousy, suspicion that triggered war is still there, peace a facade,

How Satan has led mankind: has persuaded majority of mankind to believe it is human governments that will bring peace

Satan dominates and his influence will prevent human efforts to ever bring peace and security, Rev12:12, great anger of devil, short period of time

Daniel 2: stone to crush the image, vs44,  “In the days of those kings the God of heaven will set up a kingdom that will never be destroyed. And this kingdom will not be passed on to any other people. It will crush and put an end to all these kingdoms, and it alone will stand forever,

“As to political fulfillment, its wise to wait and see what develops on the world scene”

Satan hurled into abyss after he witnesses destruction of all that is his, just like Pharoah does down in Red Sea.

Isa 65:21-22, “They will build houses and live in them, And they will plant vineyards and eat their fruitage. They will not build for someone else to inhabit, Nor will they plant for others to eat. … And the work of their hands my chosen ones will enjoy to the full.” Love this one.

Oddly and separately, i have been going through Moby Dick again. Is this going to mess me up, getting the two Ahabs mixed up?

Para 5-6: When the first prophet rebukes Ahab, he softens, humbles himself, and that is noted: 1 Kings 21:29.   It is fleeting. He hardens, His words of the second prophet, “I hate him.”

“So we really don’t have a whole lot on our chalkboard for Ahab, do we?” the WT conductor sums up.

“Remember Manasseh,” gruff Joe said as the rest of the body went on to consider a certain returning one’s course of repentance.

Para 12-13: The conductor’s doing the chalkboard thing again with Manasseh, and its stacking up differently than it did with Ahab—Manasseh, who went on to undo what he could of how he had hashed up things.

Thank you, Jeff Bezos. (or whoever) AI translating converts Manasseh into NASA.   #WeHaveIgnition

Para 13–That’s not a bad illustration, is it? Asked for baked goods, get handed an egg, and will you be satisfied with the explanation that, after all an egg IS an ingredient of baked goods?

This is a good handling of the material by the WT conductor, who brings out the chalkboard illustration again.. Did you know that his Dad was drafted into the NFL? (and wouldn’t let his young children watch the sport on TV on account of the violence)

Yikes! As the sis comments, her cat enters into the screen, CLOSER TO THE CAMERA THAN SHE IS! It looks like a dinosaur! 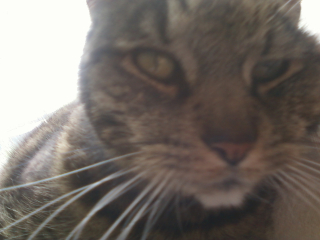 Review item: The repentant prodigal didn’t make assumptions. “Make me like one of your hired men,” he said. Turns out that all was restored and then some, but he didn’t assume it.

#MidweekMeeting ‘Go with the strength you have,’ the speaker quotes Judges 7:14 as he pulls lessons from Gideon. Imagine. 300 rout many thousands (who go down in ‘friendly fire.’) #midweekmeeting

One sis takes from Judges 6:37 (request the fleece stays dry and the ground is wet, then vice versa) that it is okay to pray to God for clarity.

Huh. The sis who said she was going to steal my illustration just did!

…That the Bible is the owner’s manual for the product that is us. But I told her not to worry. It is not copyrighted, nor even very original.

Where would I be if I did not have faith that I would see Jehovah’s goodness in the land of the living?   Ps 27:13

‘The disorder we see in the world is proof positive that God is not with them.’ Hard to disagree with that one.