Elon Musk does the Babylon Bee: Part 2–Being Saved

As the Babylon Bee interview with Elon Musk winds down, the BB guys ask Musk their ten questions, which are like the Ten Commandments only not so important, one of them explains. No. They’re not. But they certainly are eclectic.

Why is this the most interesting response? Because of the obvious inferences you can draw about bouncing back from ill treatment. I wonder how those ne’er do wells who socked him are doing these days?

But it is the last question from the evangelical site that is the real zinger. Will they really screw up their courage to ask it? They do—and you have to admire them for it—even as you reflect that absolutely no groundwork has been laid.

What in the world is Musk going to do with that question? It’s a complete nonsequitor  from anything they have been talking about in a one-hour interview. But that is true of any of the ten questions. Probably that’s why they asked the other nine—to loosen him up for this big one. Get him to answer the screwy nine, and anything is fair game.

Musk is a great guy and all—don’t get me wrong—but he plainly has no background to commit. And he knows it. You can’t just dive into something knowing nothing about it. Another of those ten oddball questions is, “if you could add a book to the Bible, what would it be?” Um—well maybe a 2nd Revelation, one that is more chipper and that tells how it all works out, he hedges, not knowing that the actual Revelation does just that. It is a quirky question from guys that run a quirky ministry and he is not quite sure what to do with it but presently responds in kind that ‘The Hitchhiker’s Guide to the Galaxy’ might do in case the guys have in mind an already existing book.

Jehovah’s Witnesses would ask that question too—not that one exactly, but one reasonably similar to it. But it would be asked only after considerable groundwork had been laid—groundwork which would take many months. It would involve a personal home Bible study. Otherwise, how meaningful can an answer to that question possibly be? You might fall this trap:

Said Jesus: “Not everyone saying to me, ‘Lord, Lord,’ will enter into the Kingdom of the heavens, but only the one doing the will of my Father who is in the heavens will. Many will say to me in that day: ‘Lord, Lord, did we not prophesy in your name, and expel demons in your name, and perform many powerful works in your name?’ And then I will declare to them: ‘I never knew you! Get away from me, you workers of lawlessness!’” (Matt 7:21-23)

I mean, you have to know what you are getting into. If you don’t, how can you commit to doing “the will of my Father who is in the heavens?” You don’t even know what it is! Yet evangelicals ask this question all the time, convinced that the answer is meaningful.

If they ask it to me—will you accept Jesus as your personal Lord and Savior?—I will reply to the effect that I think I already have. But I hesitate to gush too much about it before these guys because I’m not quite sure of their own definition. Most of them think that Jesus is God. They buy into the trinity doctrine. Jehovah’s Witnesses do not. Jesus is God’s Son, not God himself. Almost all of the Bible verses said to ‘prove’ the trinity would, if they were seen in any other context, be instantly dismissed as figure of speech.

They did ask it of me long ago, along with my two pals. Just out of high school, we piled in my car and took a week-long trip, camping as we went. 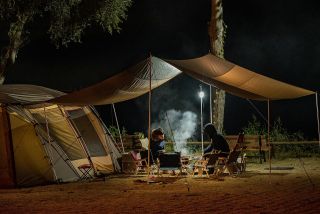 Just outside of Washington DC, a born-again character stumbled into our campsite and wanted to know if we’d accepted the Lord. No one actually had the nerve to tell him ‘Get Lost’—not even the inclination, since we did sort of respect him for what he was doing. Maybe we even thought that we should be more interested than we really were. But it was pure emotion, nothing particularly logical, which didn’t quite cut it by itself. We spent the rest of our trip composing and singing songs mocking him.

Of course, we were stupid kids. Musk is a grown man. He’s not going to go around mocking anybody—or at least not them. He likes these guys. He’s not opposed to the program. But neither is he a new foot soldier.

I give him a lot of credit. Upon processing the request, he allows how he “agree[s] with the principles that Jesus advocated. There's some great wisdom in the teachings of Jesus, and I agree with those teachings.” He mentions a few. "But hey,” he adds, “if Jesus is saving people, I mean, I won't stand in His way. Sure, I'll be saved. Why not?" Close enough, the guys seem to feel. It’s not an out and out bullseye, but it satisfied them. It’s consistent with what he said in 2020 after the Dragon Capsule successfully splash landed into the Gulf of Mexico—that he had prayed about that mission, even though he is “not very religious.”

“These are difficult times,” he said then, “when — you know, there's not that much good news — and I think this is one of those things that is universally good no matter where you are on planet Earth, this is a good thing, and I hope it brightens your day."