Samson’s choice of women was his ‘Achilles heel,’ the #midweekmeeting speaker says. ‘Terrible terrible choices’…’how could he be so dumb?’ The theme from that lead-off talk: ‘Betrayal—How Contemptible.’…1/2 #midweekmeeting

He did not say ‘fool me once, shame on you; fool me twice, shame on me’ but he said as much in other words. …Delilah nagged Samson until he revealed his secret….2/2

Lug those city gates for 37 miles? The bro covering the review picks a town 37 miles from our #KingdomHall for illustration.

‘Zeroing in on the flaws of others may distract us from who the real enemy is,’ one sis says.

It’s one thing for Delilah to say ‘the Phillistines are upon you!’ three times but Samson never actually sees them because they are waiting in the wings than for him to chase them off three times, yet still tell his secret….1/2

I mean, that is some kind of stupid, and Judges 16 doesn’t actually say they fell upon him three times, only that he was told they were….2/2

And what about that old joke I once read in Mad Magazine: Samson gives final performance—brings down the house….Did young Johnny really used to bring in Mad Magazine encased in the Watchtower? Nonetheless, he grew up to be a fine bro.

One sis phrases her ‘Initial Call’ talk that ‘the Bible is a book of promises made and promises kept, as she introduces the video ‘Why Study the Bible.’

Next is introduction to the video, ‘The Bible Saved Our Marriage.’ Worth doing whenever possible.  ‘We couldn’t communicate without it being an argument,’ the sis recalls. ‘It took a long time before things got better.’

God taking wheels off the chariots—I love that image at Exodus 14:25

“The apostle Paul expressed our conviction with these inspired words: “If God is for us, who will be against us?”​—Rom. 8:31.

A lasting image at Zechariah 2:8–‘Whoever touches you touches the pupil of my eye.’   ‘Something gets in your eye—you don’t wait a couple hours to deal with it,’ one bro says.

PETER: “Jehovah’s day will come as a thief, . . . and earth and the works in it will be exposed.”​—2 Pet. 3:10.    I like the expression ‘will be exposed.’ It is exposed now as not having a clue on anything. Will be exposed as utterly powerless.

The chairman reads off next week’s assignments, and then: “oh—sorry. I think I have it one week off—give everyone heart failure.”

So many times in history have villains gone down by turning on each other.   “I will call for a sword against him on all my mountains,’ declares the Sovereign Lord Jehovah. ‘Every man’s sword will be against his own brother” (Ezekiel 38:21). Can foreglimmerings not be seen today?

The speaker today is a descendant of that great drywall family empire. I don’t think he is himself though. Let it never be said that the JW membership doesn’t include scads of builders—which does come in handy sometimes…1/2

I think it has always been that way. 2 timothy 2:15,   Do your it utmost as….a “workman” with nothing to be ashamed of. Christianity is at its core a ‘blue collar religion’ and branches out from there, never dishonoring its roots…2/2 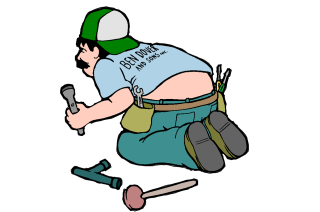 “If storm approaching, the speaker says, how many times does news report it?” Are you kidding me? It’s the only thing TV news is good at—reporting weather. That and shootings on an endless repeat loop. #IfItBleedsItLeads

Ha! That toddler chooses to REALLY SQUAWK while his mom is giving a comment. In a panic, his dad reaches for the mute button but them remembers his wife is speaking!

What I notice is how often occasions arose that if he DIDN’T have loyal love he might have said, ‘Alright! I’m done! I’m outta here!’

Para 9: “Know that Jehovah will treat his loyal one in a special way; Jehovah will hear when I call to him.” Ps 4:3   Love the unworded music video for this one. I recall inviting a certain unknowing return visit to write a screenplay for it.

There must be hundreds of songs from my childhood I used to hear on the radio. Few of them can I recall word for word. Yet none of them have I forgotten the refrain…..2/2

Para 12 reminds me of an Isaac Bashevis Singer short story of a Jewish priest so merciful that he could not bring himself to kill the sacrificial animals. Town life ground to a halt. Finally someone told him he didn’t have to be more merciful than God.

Para 13: “As far off as the sunrise is from the sunset, so far off from us he has put our transgressions.” (Ps. 103:11, 12).  This is my son’s first Bible reading, deliverer eons ago. I can still see him working on the obvious gestures called for.

Para 17: “The prophet Jeremiah stated: “It is because of Jehovah’s loyal love that we have not come to our finish, for his mercies never end.” (Lam. 3:22)”