It’s so Hard to Dramatize Mildness

You don’t check with true believers for plaudits. They’ll praise anything. Nor do you check with your detractors. They’ll trash everything. You run it by people who are neutral. That’s why I loved this review of the Regional Convention.  The visitor is skeptical, but he’s open and fair. Of course, we would prefer that he fall on his face and say, “God is really among you people!” but you have to take what you can get.

Alas, he compared the Jonah presentation to a B movie from the Bible Channel! Them’s fighting words! I liked that video.

Strictly speaking, though, maybe B movie status is the best one can hope for. My unspoken fear is that the brothers do not go to all that trouble of recreating settings from antiquity and then undermine it by so-so acting. Great acting will overcome a minimalist setting—just witness any stage play, but the reverse is not true: Meticulous settings will not overcome wooden acting. It is encouraging to hear how actors are being selected from submitted auditions. I just worry that talent will be recognized when presented and not tamped down in an effort to make “mildness” come through. Sorry to say, some of our dramatized characters strike me as so “mild” as to be uninteresting. I get it that mildness is a fruitage of the spirit but I don’t want to see them so mild that I can’t picture them doing what the scriptures say they do. Even Jesus—I want to see him mild, sure, but I also want to see in him the man that nobody dares question after he shows enemies up as hypocrites, or the man who “passes through their midst” and nobody has the courage to interfere.

And nobody was able to say a word in reply to him, and from that day on, no one dared to question him any further. (Matthew 22:46)

…and they rose up and rushed him outside the city, and they led him to the brow of the mountain on which their city had been built, in order to throw him down headlong. 30 But he went right through their midst and continued on his way. (Luke 4:29-30)

Now, no matter what comes out I’ll swoon in appreciation, don’t worry about that, but you really do take risks when you do video. You’re presenting to an audience accustomed to convincing actors, and you’d better measure up. Granted, you’re not going to produce Oscar-winning performances, but hopefully they will persuade more than the uncritical true believer.

Over time, and with some wobbles, our performances have improved. We do get better. To some extent, “acting” is antithetical to Christians since it means presenting a false front, pretending to be what you are not. The early Christians (per secular historians) frowned upon it. More than frowned upon it—they thought it the work of the devil So almost by definition, we’re not particularly good at it, and of course the brothers also are limited by choosing those who are exemplary. It won’t do to have “Jesus” go apostate a few years down the road. We will accept in Hollywood entertainment that the movie hero may be a slimeball in real life but you can run theocracy that way.

Of course, the videos are also teaching vehicles. They are not simply entertainment in which Moses pops Pharaoh in the nose and gets the girl. 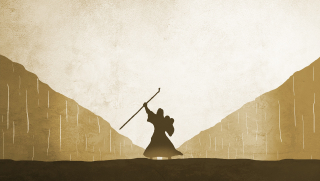 Yet I know that young people will see our videos through the eyes of contemporary standards and are not so inclined to excuse unconvincing acting. Or even speaking. “Time does not permit…” one broadcast brother said. ‘Well it would if you’d pick up the pace a little.’ I muttered under my breath.

Alas, if you add any of the spice that makes speech and action interesting, it becomes a turn-off to someone of another culture and background where they just never behave that way. So the brothers take no chances. They avoid the pitfall altogether and trowel on dramatization unambiguous and unfettered with anything potentially offputting. It is a test for those used to fine writing and oratory to not be so full of themselves, dial back artistic considerations, accept that sometimes they will get plain vanilla, and deal with “just the facts, ma’am.” Ah, well—I’ve said of the highly educated ones that they came drop down a grade level or two if they are not too full of themselves. The world doesn’t revolve around them as they too often assume it does

Mildness, meekness—yes, they are qualities spoken of highly in the Bible. Yet they’re hard to dramatize. Take that kid in one of the monthly broadcasts who ran that lift equipment through the wall. “Brother Goofus,” his overseer gushes, “Are you alright?” Okay, so far so good. He would do that. Upon being assured the kid didn’t break his neck, the mild bro  says, “Do you have a moment to meet me in my office?”

Okay, got it. We’re mild. We’re loving. We don’t care about screwing up the project. We see only a teachable moment, and we see it immediately—nothing else enters into our mind. Far be it from us to pull that stunt of Paul and Barnabas and display a sharp outburst of anger. If those guys had been on site, we’d have invited them into our office too.

A little bit more realism is what I’d love to see. And yet if it is done, someone will be stumbled by it. So we ladle out stuff so bland that it undercuts appreciation, and so unrealistic that the ne’er-do-wells frame it as cult-like. It’s kind a shame that you can’t show human imperfection in your heroes.

I for one brother appreciate what you say here and the efforts our brothers and sisters go to to make the videos as straight forward and simple for the humble ones to get the main points from them. Who cares whether or not they could or should earn an Oscar from them. As for the the critics, they won't even matter soon anyhow and those who want to label us as being a cult or whatever their shallow thoughts are to be, they won't even be much of a considered thought in the new world near at hand. You are obviously a great passionate lover of truth and in my books, that is commendable so keep up the encouraging work...

Thanks for this post. Very reassuring to see this perspective. And this part hit home too: “they drop down a grade level or two if they are not too full of themselves. The world doesn’t revolve around them as they too often assume it does.” Guilty!

[Tom replies: Well….I didn’t mention you by name :) thanks for the remark]