On pet peeves: Here’s one: those talks that end, “so may we never fall into the trap of Elijah, who….” (Substitute Peter, Moses, Paul&Barnabas, any of the good guys—it all works out the same.) What! Are you kidding me? We’re going to outdo Elijah? If he fell for it, we will fall for it too. At best we will be guided by their course in seeing how they recovered from it.’

On anxiety and faith: Anxiety has caused problems in the past. At the moment it is at bay, but don’t ever think one immune. Is faith, like anxiety, part of the variation of people? Some are anxious by nature. Some have never been anxious a day in their lives. Faith may be like that. It builds more easily is some than others.

For what it’s worth, I’ve benefited much by making relevant that supposedly irrelevant ancient model of humans tugged at by, in clockwise order, air, water, earth, and fire, for a 360 degree spectrum circle of human qualities. Heady people are overly given to “air.” Their heads are “in the clouds,” At it’s most severe, their feet begin to lose touch with the “earth,” and they are given to anxiety and various forms of mental distress.

“Earth” people, on the other hand, are rock-solid dependable, Here are they people who typify Solomon’s remarks, people who eat, drink, sleep, and see good for all their hard work under the sun. Here is the person who goes on and one about the delicious meal they’ve just eaten. They’re not particularly speculative nor brilliant, not overly given to deep thought, but they are solidly competent and not easily derailed by anxiety. 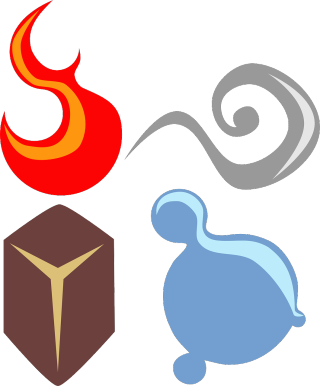 Fire and Water are at opposite poles, too. Water completely envelopes any situation. Here is the person people love to confide in because he or she can see both sides of any issue, get their heads around it, and are not given to condemn. From this direction the ‘peacemakers’ are most likely to be found. Of course, from ‘fire’ comes the hotheads, the ones most given to ‘shoot first and ask questions later.’ There’s a place for them. Ask Phinehas.

There are all these types in Jehovah’s organization since that is the fabric of humanity. I like how they bind together as a brotherhood where they love, cooperate with, and compensate for one another. The too-frequent pattern in the greater world is for these extremes to congeal at opposite poles and from there scream at each other.

The digital age has changed many habits. When that Watchtower used to come in the mail I would set aside time to read it cover to cover in one sitting. I didn’t even take the shortcut recommended jokingly by one brother regarding the Letters from Readers, who said he would read the question then skip down to the last line to see whether he could do it or not.

I lost touch of that routine when the magazines went virtual. I tend to focus on talks now, those presented online, and I take “stream of consciousness” notes in order to pay attention. If I don’t my mind wanders. I typically don’t read the Watchtower articles until shortly before we study them, and some articles it may be many months before I get to. Some, no doubt, I never see at all. It doesn’t help that as my appetite for reading detailed material grows, our articles get simpler and simpler.

Just plain Bible reading works as a first go-to, there absorbing directly from Jehovah’s written word what best builds faith in ways we may not be able to even put our finger on. Once you have the pattern of healthful teachings  you can extrapolate into what is written in the Bible that the organization hasn’t commented on, or hasn’t commented on much. Sometimes I am surprised at the “gems” they choose to highlight, gems that seem to be simply Bible trivia and not especially geared for building faith. Too, I would give a lot to hear, “Man, that weird!” over some conduct of the prophets rather than continually euphemizing it into “their expression and manner [that] doubtless reflected intensity and feeling that were truly extraordinary.”

Posted at 10:22 AM in Christian Living, The Sheepandgoats' Family | Permalink | Comments (0)