Home Archives Profile Subscribe
Tweeting the Meeting: Week of May 16, 2022
Things That Drive You Crazy about the Faith—and How to View Them: Part 3

Things That Drive You Crazy about the Faith—and How to View Them: Part 2

This will be a multi-part series. See Preface,  2nd Preface,  Part 1

For most of human history it was, ‘if you want to figure out something, go to what has been revealed about it.’ That was Scripture—information given from on high, information revered because it “had stood the test of time.” 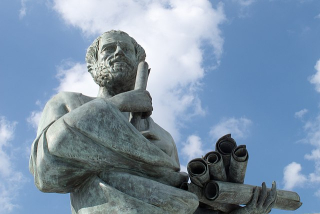 Aristotle philosophied on how the world was three hundred years before Christ and his teachings were dogma for almost 2000 years. Euclid, Aristotle’s contemporary, derived rules of mathematics and nobody dared add to that structure for as many years.

The motive to think of and do things as they had always been done was overwhelming. Experiment with new growing methods in the days of subsistence farming and if you get it wrong you die! Who would take a chance on something so risky? Stick with ideas “that had stood the test of time.”

At first glance, Jehovah’s Witnesses are not unduly hobbled by this mindset of knowing things by revelation. They have at least three things going for them. One, they keep up with science, more or less. They’re not the ones who put dinosaurs on the Kentucky ark. They put them on the inside of their 1961 Bible cover, but they took them out in deference to science declaring that those monsters lived long before humans. 1961 might seem awfully late to still be putting dinosaurs on your inside Bible cover, but recall it took till 1987 for the evolutionists to arm twist the U. S. Supreme Court (Edwards v. Aguillard) that creation science is not science, and since that time the Witness organization has never said it was. Maybe they never said it at all, since “creation science” has political overtones and the Witnesses don’t do politics.

Instead, Witnesses have become accustomed to reading such things as “the Bible is not a book of science, but it is in harmony with true science.” Materialists will choke at this phrasing, for they assume that ALL science is true, and if it is not there is no other way to correct the problem than a further advance of science. But the Watchtower’s phrasing is in accord with the truth that not everything is examined physically; some things are examined spiritually, and when science encroaches on that field where it has but clumsy and inapplicable tools, it is apt to come up with something other than “true science.”

So if scientists have been convinced of evolution since the day Darwin stepped off the returning ship, the teaching was still controversial for the great unwashed up till at least 1987. Jehovah’s Witnesses by and large are from the great unwashed. Few are scientists. That being the case, it’s reasonably progressive of them to be interviewing Michael Behe in 1996, who believes in evolution in the main but insists it has limits—the “edge of evolution,” in his words. Micro-evolution is correct, he maintains. It is the bird beaks that Darwin wrote about, little different than animal husbandry that farmers have known of forever. But macro-evolution is unproven, Behe says, and abiogenesis much more so. In fact, Jehovah’s Witnesses will have little objection to Darwin. They wouldn’t have interviewed Behe if they hated his guts. When they do object to Darwin, it is because of correctly anticipating the tractor-trailer loads of dogma that atheists will drive through the door he leaves open.

Not everything dovetails. But by and large, the Witness organization takes the view, ‘let scientists be scientists and Bible students be Bible students.’ You don’t have to know everything this instant. It’s okay to put some things on the shelf pending further information. Is it true that we cannot hold ideas that don’t entirely square with one another simultaneously without our heads short circuiting?  One look at a Pharma ad suffices to show that cognitive dissonance is a concept vastly overrated—with narrator insisting that you must have the drug peddled and voiceover saying that it may kill you.

Thinking about this quote: "But by and large, the Witness organization takes the view, ‘let scientists be scientists and Bible students be Bible students.’" I'm 44 now and grew up in the truth. Is that really the organization's view? How does one define 'scientist'? It doesn't require a materialist view. Over the last 10 years I think I've begun to define 'scientist' and 'Bible student' as the same thing: learning, observing, testing, drawing conclusions based on what's known and observed, and then living in harmony with that (more testing). I wonder if this is an error on my part and lends to my frustration with my brothers and sisters lately (especially during the pandemic).

I agree "You don’t have to know everything this instant." But I wish some in the congregation would take their enthusiasm for learning scriptural truths and apply it to learning the truth in other areas of life. I'm disappointed (and maybe distracted?), but I'm beginning to think Jehovah isn't concerned right now whether we as an organization know/speak/live the truth regarding diet, health, chronic pain, mental health, medicine, or disease. And if that's okay with Jehovah, I have to learn to be okay with it. When I learn something in any of these areas, I feel my appreciation for Jehovah grow. But I also feel compelled by conscience to live in harmony with anything I learn; and sometimes that has me feeling like I'm swimming against the current even in the congregation. I've been content (mostly) to keep these interests personal and private, but the pandemic seemed to make a lot of matters public that I felt have been private up to now.

[Tom replies: When you sent this to me privately, out of concern it might discourage some, and I encouraged you to post it, I did so because I thought others would identify with it. I won’t address all of it; this 10-part series (including the prefaces) will go on to address much of it. Write me after the ten (I may stretch it into additional posts). For now, I think the earthly organization’s main concern is pressing forward in the preaching work and getting our own people through the Great Tribulation, with less emphasis on rounding out into the areas you mentioned. Not that those areas are ignored—I can think of magazine articles on all of them, but the stress and meeting content is elsewhere.
I’ve spoken of how much I like this Great Courses lecture series on such topics as religion, science, history, and philosophy. Agreed there is no encouragement to delve into such things and much discouragement that too much is a distraction and ‘wearisome to the flesh.’ Some of it depends upon how much of a “high-information” person you are. Some have to soak up everything. Others are content to focus on just the most important. I will say I am very glad to have the truth as a firm foundation prior to delving into this college-level material. This is because the truth can be likened to that jigsaw puzzle that comes together so that the picture on the box cover is reproduced. With the Great Courses, it is just man’s ceaseless exploration that reaches no conclusion, only food for thought.
Lastly, how one defines ‘scientist’ and ‘Bible student’ is largely in the eye of the beholder. I have no problem with how you’ve come to view those terms, even if I don’t entirely look on it that way myself. For the most part, the organization does not try to ‘prove’ the Bible to scientists; it only seeks to demonstrate that the Bible is reasonable. ‘Taste and see that Jehovah is good’ the psalm says. Taste is subjective. If you hate avocados, there’s no way I’m going to ‘prove’ to you that they taste good.
There are people who ‘taste and see that Jehovah is bad.’ Faith is not something provable in the scientific sense. One can only demonstrate that it is not unreasonable.
Thanks for your comment.]

You said "I will say I am very glad to have the truth as a firm foundation prior to delving into this college-level material." This is so true and something I do not want to take for granted. And, generally, all in the congregations have that firm foundation in common, outside of whatever other knowledge gaps we may have.

[Tom replies: Yes. The college courses represent mankind’s eternal search for answers, with only lukewarm success. The truth, though it may jettison what is superfluous, represents a structure that holds—all pieces of a puzzle assembled so that the picture on the box top is reproduced.]