Home Archives Profile Subscribe
Tweeting the Meeting: Week of May 9, 2022
Things That Drive You Crazy About the Faith—and How to View Them: 2nd Preface

Things That Drive You Crazy About the Faith—and How to View Them: Preface

“Great scriptures and reasoning to some one who is anti witness,” she told me. “I did write up some things and then I thought….oh blow it…I’ll back him up…all the way!!!”

Make no mistake. It is a concious choice. I could easily attach a “But what about such and such…” addendum to some paragraph in nearly every Watchtower if I wanted to. Some nettlesome point will stick in my craw, but then I will ask myself should I obsess over it? Wouldn’t that be like the pundit who reads that North Korea has launched all its nuclear missills? 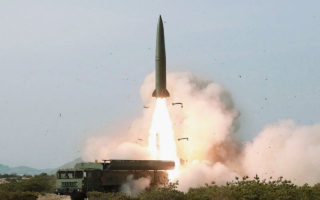 People with sense will run for the hills. He runs to his keyboard to point out that the idiot can’t even spell the word right. Isn’t that called ‘losing sight of the big picture?’ Why would anyone want to do that? (Photo: Janes.com)

The fact is (so says me, so take it for what it’s worth) that Jehovah’s Witnesses have it right in all the important things, but there’s a lot of minor aggravations. What to make of these? Is it because we’re all jammed together in close proximity whereas in the greater world you just put distance between those with whom who don’t readily mesh? Partly. I’ve heard two circuit overseers describe us in the past few years as “one large, united, happy, somewhat dysfunctional family,” a phrase I suspect is not in the outline.

Too, I’ve heard tell from young ones who’ve flown the coop that they don’t miss the “drama.” Yes, just pulling the Abraham/Lot stunt goes a long way in alleviating tension: “So Abram said to Lot: ‘Please, there should be no quarreling between me and you …  separate from me. If you go to the left, then I will go to the right; but if you go to the right, then I will go to the left.’” (Genesis 13: 8-9) We don’t do that. We stick together and with mixed success try to apply Bible counsel to lessen “drama.’

But if scrunching up is hard on us, what is to be said of the world in general? That’s why I gave Vomodog the answer I did when he tried to undermine 2 Timothy 3:1-5. “Humanity is no better or worse than in past centuries,” said he. “The scenography has changed and other global changes have taken place, but the nature of man is constant.”

“It hardly matters, does it?” I told him. “You can fart all you want and as along as there is plenty of space between you and your neighbor, there are no real consequences. But when population, technology, and competition for resources brings people shoulder to shoulder, your unpleasant ways provoke strong reaction.” We’re cramped and it’s inconvenient. They’re cramped and it brings chaos to entire planet. But if you’re just one person, you can sort of just live in your own bubble and ignore all that, at least most times you can ignore it, at least you can until you can’t.

These days I’m like Richard Kimble replying to Sam Gerard. “That’s right—I’m not trying to solve puzzles here,” Sam says. Richard replies that he is “and I just found a big piece.” Same here. I knew those Great Courses lectures would do more than prepare me to hold my own should that obnoxious know-it-all Alan F ever show his nasty persona here again. He was getting seriously up there in years and it could be he has died, but I think not because the birds in heaven have not all broken out in song. When he does die no doubt his headstone will call the cemetery caretaker an ignoramus for supposing the surrounding flowers and trees were created by God

What I found through the Great Courses professors is even more helpful. It will better enable me to weather all the minor aggravations of earthly organization, because they all boil down to the same thing. And that same thing, while it can be trying, is anything but a dealbreaker.