Imitate Jesus by Serving Others is the #watchowerstudy article. “There is more happiness in giving than there is in receiving.”​—ACTS 20:35, the theme verse.

Para 2 “We, though, who are strong ought to bear the weaknesses of those not strong, and not to be pleasing ourselves.Let each of us please his neighbor for his good, to build him up. For even the Christ did not please himself, but just as it is written: “The reproaches of those reproaching you have fallen upon me.” (Rom 15:1-3)

Para 6– I never realized this: Jesus was likely grieving when called on to give what would become the ‘sermon on the mount.’  “At hearing [of John’s death], Jesus departed from there by boat into an isolated place to be alone.” Matthew 14:13 #watchtowerstudy….1/2

so we may give talks, and afterward people say ‘good talk, good talk,’ and maybe they are tolerable—but none of us were grieving just before…..2/2

Oops. It was not the sermon on the mount, though it was one just like it in which he fed multitudes. My bad—but effectively it is the same….3/3

Para 6: I related the story, not mentioning the name, of a well-known bro in the circuit who suffered an auto accident on the way to the Hall. He must have been in shock. A motorist offered to help—he said, ‘yes’—run him to the KH, 1/4 mile away, ….1/2 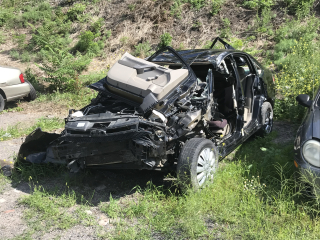 where he entered and said he could not give his talk that night, then had the fellow run him back!….2/2

Look, he did it. That doesn’t mean I’d do it. Let us not try to outholy each other. I’d leave the brothers hanging, just having been in an accident. Someone can pinch hit.

(Of course, the accident was not as bad as the one pictured. If if had been he would have come to the Hall on the end of a spatula.

Para 11: I like the point about being honest with self. ‘Yeah, but I don’t want to’ is a perfectly understandable human response. I mean, much of the good things people do is not necessarily their first instinct.

Foreshortened Watchtower. This was the week of the circuit assembly, streamed as the really large gatherings haven’t yet resumed.

The assembly program began with the song ‘We Must Have the Faith.’ It has staccato very distinct notes and I will forever remember our two-year-old, ages ago, turning to us with eyes aglow, exclaiming, “It’s dah da da da DAH!’

Here I am reading about Abigail, Nabal, and David. Pity the woman who must deal with good for nothing men. Even the guy’s own servants called him good for nothing. #midweekmeeting

Look how Abigail got her entire household out of a spot and saved them all from the retribution of a hothead. Had she not, maybe Nathan would have rebuked David earlier and then God not been so patient over his lusting over that hottie on the rooftop and offing her significant other to cover his tracks.

“About ten days later, Jehovah struck Naʹbal, and he died.” 1 Samuel 25:38. Sometimes I think that the reason it says Jehovah struck Nabal dead, and we go into tortured explanations to explain he didn’t , is that the Bible writer thinks he did. ‘Truth is established progressively as the day dawns’ and so forth.