Things That Drive You Crazy About the Faith—and How to View Them: Part 5

Dozens of separate disconnects all collapse into one manageable whole with this new insight from Kors, who has no idea of the boondoggle he has untangled. For example, it is ‘knowledge by revelation’ that accounts for the Witness organization’s view of how those who leave the faith fare. The Bible says they don’t fare well at all. “What the true proverb says has happened to them: ‘The dog has returned to its own vomit, and the sow that was bathed to rolling in the mire,” says 2 Peter 2:22.

What about those they join, those already in ‘the world?’ Those ones are doing the ‘will of the nations: “loose conduct, lusts, excesses with wine, revelries, drinking matches, illegal idolatries” and in general slopping around in the “low sink of debauchery.” (1 Peter 4:3-4) “Water’s fine here in the low sink!” they say, even adding “who are you to judge?” but we know ‘by revelation’ that it could not possibly be so. We also know ‘by revelation’ that ones in the low sink “are puzzled [that you do not join them] and go on speaking abusively of you.” It does often work out that way, but it is good to know that the source of the insight comes from revelation and not direct observation. 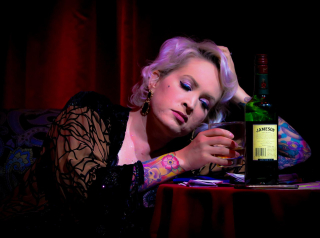 Taking their cue from this method—knowledge of the short term via the revelation of the Bible, if you’ve left the faith, you’ve belly-flopped into the low sink. “I just explained the rainbow flag attached to paragraph 5 to my mum,” tweeted one youngster whom one suspects is not fully with the program, maybe not at all. “Everybody! come and see this woman exclaiming loud in the Hall.” I barely noticed that flag. I figured it was some national flag. I mean, it was in the background and perspective made it pretty small. You could have fit 100 of them in that huge liquor bottle up front. That’s how it is when ones leave the faith. They do nothing but drink, smoke, and party.

Yikes! then along comes some who left the faith and didn’t fall into that montage of every planetary vice. Their lives do not go straight down the toilet. Short-term it even improved. They put distance between Lot and Abraham and they breath easier at escaping the tension. If there is a cost, it won’t be paid for a long time. Many convince themselves there will not be a cost, and go apoplectic at how they are mischaracterized in Watchtower literature with the liquor bottles, the syringes, the cigarettes, the raucous parties. ‘What a bunch of liars!’ they say. They should know there is no lying. It is a result of ‘knowing things by revelation.’

Concede that other points of view exist and then deal with them. It says you’ve done your homework. It bolsters your credibility. You’ll be trusted more than the one who gives the impression of trying to ignore or even hide other points of view. Alas, as much as that makes sense, ‘knowledge through revelation’ says you don’t do that. It is enough to know what is true. You don’t have to explore what is false. While there is a certain logic to this, it does leave you vulnerable to those who read the tantalizing arguments of the malcontents and wonder why you’re not addressing them.

Posted at 07:48 AM in Knowledge Through Revelation | Permalink | Comments (0)