Home Archives Profile Subscribe
Things That Drive You Crazy About the Faith—and How to View Them: Part 5
My Meeting Notes, Week of May 30, 2022 (with musings and flashbacks)

Things That Drive You Crazy About the Faith—and How to View Them: Part 6

Pursue higher education and it can only be because you want “to make a great name for yourself,” to secure a cushy seat on a sinking ship. “Nah, I just want to make a living,” some will say, but it is lost upon those who receive knowledge from the revelation of the scriptures. ‘Wisdom cries aloud in the streets and public squares,’ says Proverbs 1:20, not the quadrangles. In the quadrangles, Scripture indicates you will more likely find “every wind of teaching by means of the trickery of men,” not to mention “empty speeches that violate what is holy and from the contradictions of the falsely called ‘knowledge.’” Since the Word says it is so, the Bethel brothers don’t bother to look for exceptions. If you do look for exceptions, they will wonder how you got off unscathed and question as to whether you really did. Why flirt with what revelation says not to flirt with? It doesn’t help that revelation says a Christian is to “work with [his] hands.” (1 Thess 4:11).

It’s all revelation that tells them this. They trust revelation because it is from God. Nor is it untrue in so far as it goes. To the anticultists who want to ensure that nobody depart from mainstream secular thinking and who level charges of ‘brainwashing!’ one might respond that it is not brainwashing they object to, but brainwashing that is not theirs. The Witnesses’ caution of higher education is overall valid, but some will say they torpedo themselves with a revelatory approach that misses the nuances. At times, nuances make a substantial difference.

At college they unscrew your head and pour in undiluted the wisdom of this system of things, convinced it is all wisdom, trusting that if it isn’t you will sort it out with your newly acquired ‘critical thinking.’ Alas, humans don’t work in accord with critical thinking. The heart makes a grab for what it wants, then charges the head to come up with a convincing rationale. This lends the appearance that it is the head calling the shots, but it is the heart all along. As to ‘overeducating’ the populace, the time is coming, says Mike Rowe, when an hour with a good plumber will cost the same as an hour with a good psychiatrist, by which time we will have need for them both.

In a way that’s not totally integrated with the decadent images of lowlife, revelation in the person of Asaph shows that some unbelievers, the movers and shakers of the world, personally have it altogether. “Their bodies are healthy. They are not troubled like other humans, Nor do they suffer like other men. Therefore, haughtiness is their necklace; Violence clothes them as a garment. Their prosperity makes their eyes bulge. . .  Yes, these are the wicked, who always have it easy.” (Ps 73: 4-11)

At a high-brow function long ago where we would not typically be, I whispered to my newly betrothed wife: “Here’s people we don’t usually hang out with—the wicked!” She looked at me as though to say, ‘Did I really marry this guy?’ but it was too late. I got that one from revelation, specifically Ps 73. Witness leadership draws on that Psalm as well, and it is hard to imagine them wrong on that point. One taunter hurled at me: “Why do you Witnesses always have to believe things are getting worse? What does that belief do for you?” I replied that it helps me to explain why the Doomsday Clock is set at 90 seconds to midnight and not 10:30 A.M. I mean, it can’t be that everyone’s doing a great job for that situation to exist. 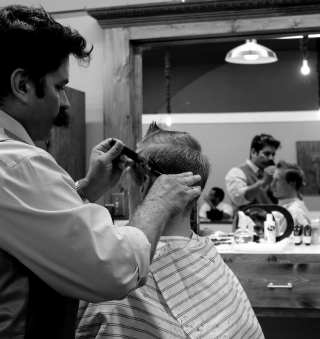 Nor do they even do a great job personally, though the money covers up that deficiency. My buddy the hair stylist, the one who worked in the la-di-dah spa where people like Cher go to spiff up when they breeze into town, says, “Oh, you should hear what they tell me! Their personal lives are a mess.” I mean, everyone tells their barber everything. And then their barber tells it to his chum. And then his chum puts it on the World Wide Web! But do I know it only through this chum? Nah, I also know it through the professor that sat next to me on the airplane. It’s not perfect, but knowledge of the present through revelation has served me pretty well overall.

Posted at 07:59 AM in Apologists, Critical Thinking, Knowledge Through Revelation | Permalink | Comments (2)

I'm having a tough time following this example of higher education. You said, "“Nah, I just want to make a living,” some will say, but it is lost upon those who receive knowledge from the revelation of the scriptures." But I'm not sure that's true. The knowledge by revelation does not prohibit pursuing higher education (which is really a *very* broad term). “Every wind of teaching by means of the trickery of men” is also found in grade school, high school, and at one's place of secular employment. I see this as just *one* of several principles to consider in making a decision about education beyond high school. Other principles would include "making sure of the more important things" and keeping your life focused. It seems to me that the knowledge by revelation is very nuanced about this. I am not defending higher education! I personally am much more in line with Mike Rowe's assessment of it. But here's the thing: I know two members of the congregation who each acquired a four year college degree to increase their secular employment opportunities. They'd each received state scholarships, so they had no debts at the end; they each pursued basic majors and were able to avoid a lot of the philosophy courses; they each attended local colleges while living at home; and they both went on to full time pioneer service, bethel service, and foreign language service. None of this seems to conflict with knowledge revealed in the scriptures when you take into consideration *all* of the scriptural principles that apply. But these two were also criticized by some who take a black-and-white approach to the application of a single scriptural principle... and I think it is that b&w approach that often creates the appearance of a discrepancy between revealed and observed knowledge. And that approach can also be the source of a lot of unloving drama in the congregation. It amounts to taking a single principle and turning it into an unwritten rule. I guess my point is: I can't think of examples of knowledge by revelation contradicting empirical knowledge (which is your premise for this post right?). When this *seems* to be the case, it is almost always either that there are gaps in the empirical knowledge OR the revealed knowledge is being misrepresented perhaps? Am I missing your point? I might be getting lost in the details.

[Tom replies: You are missing my point and getting lost in the details but I think the fault is mine for not presenting them more clearly. Were I to rewrite my post it might be pretty close to what you just said. We’re on the same wavelength. Good point on the ‘means of trickery’ being woven throughout, not just post-secondary. Thanks for your reply.]

I think both you and Cory are bang on. When I read the biblical narrative, I personally feel it’s a narrative that presents multiple lenses to look at every situation through,,, a very nuanced narrative that is constantly challenging the reader to look at things from a different vantage point. The more time you spend with it, the more you come to realize that. The org is great at taking that complex narrative, preparing teaching tools around it in hopes to give its members not only a strong working knowledge of the bible but also to help them to apply it practically in their lives. However, I feel that in that process, at times, complex scriptural concepts are oversimplified and the nuances and sophistication of the text are left behind to a certain extent. This leads to a mode of thinking among many that is fairly shallow at times. Then people get stuck in their way, tribal, dogmatic,,, a real downward spiral. But again, that’s the beauty of the biblical narrative. It’s helps the reader see that things have always been this way. Nothing will ever really change. People tend to have a phase lock. It is what it is. Still pretty good. And all the free water you can drink at the hall.

[Tom: Yes. The trick is not to sanitize the present. It is to desanitize the past. Trusting in the Bible foremost is overall empowering, but is not without a downside. Both you and Cory have a way with words. Both of you help to craft just where this series is going.]