Listen to Allen Guelzo lecturing and you soon think of those Bible couplets in which the second phrase (sigh—we call it the ‘B part’) modifies the first. At it’s zenith, it is “So and so advocated this policy, but (darkened tone and lowered pace) he did not mention how he personally stood to benefit.” The next statement will be just the opposite: a somber ‘A-Part’ succeeded by its offsetting chipper counterpoint. Listening to such is an acquired taste. One generally does acquire it, however, and rather quickly, upon realizing that the guy is a history nut, a fully realized version of Roy who would tell one and all that he was a historian. “How do you know that?” a householder would say and he would reply it was because he was a historian. Finally I told him to knock it off. He was a history buff, not an historian. An historian is when other people recognize your expertise, not just you.

They do recognize it of Allen Guelzo. He a real historian, lecturing at the university, with several books to his credit. He sets the stage when introducing new characters into his narrative, allowing them to make a splash. You get the impression he regards all historical personages as his children. He commends them when they do good, chides them when they do bad, but they always remain his children. He quotes at length Machiavelli (whom he chides) for a view he shares himself—a view that nothing surpasses the joy of hanging out with the notables of history.

“When evening comes,” Machiavelli writes, “I return to my home and I go into my study, and on the threshold I take off my everyday clothes which are covered with mud and mire, and I put on regal and curial robes, and dressed in a more appropriate manner, I enter into the ancient courts of ancient men and are welcomed by them kindly. There I am not ashamed to speak to them, to ask them the reasons for their actions. And they in their humanity answer me, and for hours I feel no boredom. I dismiss every affliction, I no longer fear poverty, nor do I tremble at the thought of death. I become completely part of them.

This sound so much like prayer that one cannot leave the similarities unmentioned. One reflects on a certain commentary on prayer (“Your Prayers Tell on You”—November 15, 1958 Watchtower) in the Jehovah’s Witnesses literature that, “by listening to the Holy Scriptures, the words of the prophets, the thoughts of the apostles and the wisdom of Jesus Christ all flow through the mind, refreshing it and building it up. In this way one can spend all night in prayer with God and hardly say a word. When you listen you learn. When we listen to the words of the Scriptures we show ourselves learners of God.”

It's one thing to stay in a state of prayerful meditation with God. It’s another to do so with lauded humans of the past. Does the sum total of their thoughts and deeds truly add up to anything? Or is it more akin to Richard Kimble taking cover as the train delivering him up for death derails, scattering cars willynilly, leaving Sam Gerard to come along later and exclaim, “My my my my my my my my—what a mess!?” If you think it’s the latter, why devote your life to recording history? Just say something pithy like Jeremiah and be done with it: “I well know, O Jehovah, that man’s way does not belong to him. It does not belong to man who is walking even to direct his step.” (Jeremiah 10:23) Or be like Solomon and briefly apply [your] “heart to every work that has been done under the sun, during the time that man has dominated man to his harm,” and then move on to something more productive.

So historians tend to be folks who do not think the sum total of human history is a trainwreck. 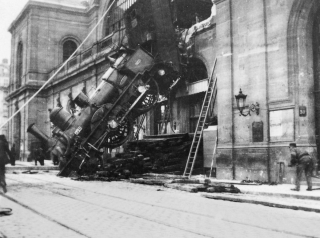 It would be too depressing to suppose it is, and then they would quit. “With every mistake we must surely be learning” they say along with George Harrison, and they are apt to squelch the gently weeping guitar that nags we are not. Moreover, though history is seldom outright fraud (poet and cultural critic Matthew Arnold called it that “huge Mississippi of falsehood”) it is, at best, subjective. It is like the elephant touched by the blind man who explains for our benefit its nature. One perceives it as a trunk, another a tusk, another a massive torso, another a tail. There is no lying involved; they all use their best judgment, but that judgment is molded entirely by their own personal experience.

Does not the relatively modern discipline of ‘criticism’ weed out such subjectivity? If anything, it makes it worse, Guelzo suspects, by cloaking human foible beneath a veneer of ‘science.’ It would not have changed Napoleon’s verdict that history is but “a fable agree upon.”

Putting it in the present day, who hasn’t heard the platitude that ‘history is written by the victors?’ Putting it even more in the present day, one thinks of the recent Pew report that the political left and the political right not only disagree on how to address questions, but they even disagree on what the questions are. Do you think the histories they write are going to remotely resemble each other?

The writings of early Christians represent pretty good history, insofar as they go, Guelzo states. Even after centuries of considerable doctrinal ‘evolution’ (which Witnesses would call apostasy), even though they are written “so that ye may believe” rather than be informed, even though there are many places they don’t go (why chronicle the details of a world that is going down the tubes?) it still makes for good history, in some ways an improvement over the classical stuff. Having given up rather quickly on Jesus’ counsel to ‘be no part of the world,’ they seek to remodel it. Church dignitaries such as Eusebius rewrite about social and governmental doings of the day to present them as molded by their understanding of Christ, ejecting the Greek and Roman gods (who are often just rebranded Greek gods) from the driver’s seat.

“Constantine bid for the support of the Christians by turning Christian himself,” Guelzo says, and then the “rush was on to rewrite Roman history in order to establish a new continuity, this time of Christianity with the Roman past.” Why did Rome, revealed in scripture as the mighty kingdom with iron and clay feet, conquer, impose order, and lay down roads? So that Paul could travel them and spread the gospel everywhere, of course! I’ve seen our own people use similar reasoning in suggesting that JW HQ came to be in the United States after that land proved a haven for those fleeing the religious strait-jacket of Europe, though not stipulated as divine direction. Suggested, though.

In reinterpreting history, Eusebius builds his narrative “on a dazzling array of published sources and archival materials,” says Guelzo. One thinks of the actual Bible writer, Luke, who opens his account with the names and titles of seven separate political and religious officials of his time, along with their interplay: “In the 15th year of the reign of Tiberius Caesar, when Pontius Pilate was governor of Judea, Herod was district ruler of Galilee, Philip his brother was district ruler of the country of Ituraea and Trachonitis, and Lysanias was district ruler of Abilene, in the days of chief priest Annas and of Caiaphas, God’s declaration came to John the son of Zechariah in the wilderness.”

Eusebius’s “literal fealty to the text of the Bible spilled over into a literal fealty into almost every other kind of text, says Guelzo. He’s “utterly scrupulous in citing letters, quotations, and official documents.” The earlier classical historians, on the other hand, “tended to put speeches and words into the mouths of their characters,” and it was left for later more analytical types to note that real people “do not deliver orations while arrows and spears are flying,” as the heroes of antiquity frequently did.

True, Eusebius so extols the benefits of Constantine’s conversion to the cross as to tempt the cynical reader to append “and they all lived happily ever after.” Some of it reads almost like propaganda—but who are we trying to kid? Those prior historians did it just the same, simply choosing different characters whose virtues to highlight. “If we've realized anything from the classical historians,” Guelzo states, “it's that alongside rational inquiry is always the need to choose, and choosing implies interpretation. There is no bright line between interpretation and propaganda because both are acts of persuasion