Home Archives Profile Subscribe
How Many Are the Cows?
How Great Historians Record History: Part 1

Making a ‘Great Name for Oneself’: Part 2

Part of a multi-part series.  Here is Part 1

Whoa! That certainly blew up in my face! George can rest easy. The friends love him

Not only was Aubree pounded into mush by everyone who chimed in, but one sis mistakenly took her sentiments as mine—I think she only read the preview—and chewed me out royal! She stuck up for George: “I happen to know that Brother Benson has taken time from his busy schedule to donate time doing specific songs that are original songs.” What’s more, she said as she slammed the door, ‘your books are rubbish!’

And here I am trying to be the JW successor to Mickey Spillane, the one who threw it back at his high-brow critics by vowing to never introduce a character who drank cognac or wore a mustache because he didn’t know how to spell those words! I mean, George doesn’t have this problem.

Quite a few people told her (and my new-found critic told me) to MYOB!. It was enough to recall to mind a certain young chum, continually accosted by someone who wanted to ‘encourage,’ who answered tersely, “1 Thessalonians 4:11.”

The bro intent on encouragement said he didn’t know that verse. ‘Look it up,’ was the reply.

The next day that brother, who was also a modest man, approached to say, “You’re a pretty good teacher.”

Said Aubree: “If he was in my congregation I would say nothing. His choices are his own. I would listen to him at a get-together for sure....But I said what I said because I come here to share an opinion which I may not express any where else.”

Understood. It’s my fault, really. She says what she says before just a few and I relay it to the whole wide world! I changed her name of course, but it’s like what my daughter once told me: “Dad, it’s getting so I can hardly say anything to you because I’ll next see it on social media! You think calling me “Amy” covers it? My friends know who it is!” Well, they shouldn’t be here. I mean, none of us are ‘recommended’ to be on social media.

Give Aubree her due because the points that motivate her are certainly valid. I just didn’t like it applied to a specific person, even if it was on the tiny private forum that I swapped for a public stage.

She pointed to how “there are many brothers and sisters who have left lucrative political careers, football careers, ballet careers, singing careers, acting careers and other careers for which they have natural talent and have all the necessary skills - for to put Jehovah first in their life. … I would rather show great encouragement to young artists to practice their craft at home for pleasure of their friends - and I tell them it is not the time now to go out in the great entertainment world to make a name for themselves - unless they lose focus and lose their life. … Football, singing and a few of these professions take their toll on the young ones.  ..... that is all I wanted to say.”

Can anyone say she doesn’t have a point? Of course, she does. She cites two persons she personally knows who chased after entertainment careers and were never seen nor heard from again.

“I do mentor young singers in the truth, and I have seen some of them go into the world to never return....... career and ego. I always warn them when they are good!” Of another, “I have told her to be cautious.”

Trouble is, it’s not in the nature of young people to be cautious. ‘The beauty of young men is their power,’ the verse says, not their caution. Sometimes I think we do damage to young people by eternally telling them to be cautious in circumstances that their peers face without the bat of an eyelash. But nobody can say, ‘What has she been smoking?’ Everyone has seen play out what she speaks about. I admire her for having the courage to say out of pure motive something she knows will be unpopular. But I’m still with George.

It’s just that those of creative bent, who may not excel in more practical gifts, are always being urged to tone it down, stay low key, keep their talents under a basket—whereas if your talents lay in putting down carpet, you would be honored in the highest places. Understand, it’s not the honor that is sought—it is the ability to move about freely.

There are brothers who are craftsmen, 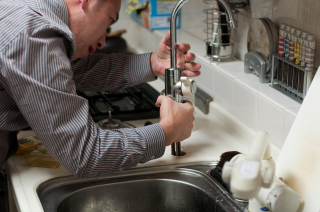 who truly excel at their field, and are highly sought after. One of them locally is snapped up by a Fortune 500 company that puts him on their private jet and flies him all over to their various facilities, treating him like royalty. Nobody ever dreams it is an improper tending to his career or that he is unhealthily inflating his ego. As to me, my quip for the longest time has been ‘if it pays, I’m not good at it. If I’m good at it, it doesn’t pay.’

‘How come you never taught me practical things?’ I said to my aged dad, who was handy. ‘I did,’ the amiable fellow said, having long outgrown his former taciturn ways. ‘You just weren’t paying attention that day.’

I think he fell for the mantra then in vogue, ‘To get a good job, get a good education.’ You can always hire people to do that lesser stuff for you.

I have what I need. I don’t complain. I do let off steam from time to time, but that’s like the Eastern European man who went to the police to assure them that the political views of his parrot were not his.

Wow. This kind of thing is always astounding to me. 1 Thes 4:11 of course. But also, what happened to "love believes all things"? There's such a sad tendency for some to rush to judgement because someone isn't or doesn't appear to be following their unwritten rules. Where does it end? And *in the end*, no one can survive such criticism. "That's certainly not how I would do it, tsk tsk."

I will empathize with Aubree's concern for the youth (tho I never found such sentiments helpful personally); and I definitely empathize with the inclination to be judgmental... self-righteous indignation feels good and it comes from a place of old pain for sure. And it's certainly painful to recognize it in oneself. But I don't think she really has a point at all (unless this post is going over my head). I just see another oversimplification of a potential danger (career and ego) and a seeming difficulty thinking outside the box.

I remember a couple decades ago, just the concept of what we now call original songs was considered undignified by many. But creativity won out, and it's more enjoyable. Who could've imagined? Who was willing to try? Somebody had to.

There's countless examples. What about the elder body that celebrates the end of a long elders meeting with Sazeracs at a rooftop restaurant downtown? *Gasp!* (spoiler alert: that was many years ago, and they're all still in the truth.)

It isn't the way some people would do things. But instead of judging because some have lost balance with certain decisions, why not root for others who seem to have found balance in a similar choice or who are willing to do the work of thinking outside the box? Judgement, rule-making, compliance, pearl-clutching, cries of "think of the children!" ... just another trap from the Devil: "If you don't like playing in the low sink of debauchery, how about a Pharisee sandwich!" (it's made with a tenth of the mint and the dill and the cumin.)

As we grow to perfection and heal from this old system, I think we will be far less inclined to seek 'comfort' behind rules and judgement. Until then, well, I sort of do it all the time lol! I might be doing it now.

[a ‘Pharisee sandwich.’ Nothing went over your head. :) ]

Very interesting read brother, I for one now have learned to just keep on doing what I have always done, keep low key and many opinions to myself. To me a true Christian Stops and I break it down like this Stops Telling Other Peoples Stories. Please notice the capitol letters spell out Stops...ps, I've just become totally fed up myself with people judging others without bothering to investigate if something is true or not but oh well...Jah Knows...

[For sure, it is always a temptation to judge.]